The initial SEAT León (Volkswagen Group Typ 1M), launched in 1999,available only as hatchback, and the related saloon version was known as the SEAT Toledo. It was based on the Volkswagen Group A4 (PQ34) platform and, as such, shared many components in common with other VW Group models such as the Volkswagen Golf Mk4, Bora and Audi A3. As SEAT's first C-segment model as part of the VW Group, the León Mk1 was marketed as a sportier and cheaper variant of the Golf. To reinforce the sporty image, the vehicle had slightly more aggressive looks. The more expensive versions were equipped with relatively more powerful internal combustion engines, along with firmer suspension to improve handling. In the interior, the dashboard was derived from that of the first-generation Audi A3.

In some countries, there was also a "Cupra 4"; equipped with a 2.8 litre VR6 delivering 150 kilowatts (204 PS; 201 bhp) and equipped with four-wheel drive (4WD), based on the same Haldex Traction multi-plate clutch as the Volkswagen Golf 4motion.

A range of Turbocharged Direct Injection (TDI) diesel engines was available, including a 110 kilowatts (150 PS; 148 bhp) version of Volkswagen Group's 1.9 TDI engine, originally sold as a "Cupra 4 TDI", with 4WD, that was sold for one year only, and only in certain countries, then passed to "Evolution" series, then "Top Sport", and later rebranded as the "FR" ('Formula Racing'). In other countries the model was badged "Cupra" and then "FR" before a limited number of cars were fitted with the bodykit from the petrol powered "Cupra R" and named the "FR+". Lesser diesel versions were available with 66 kilowatts (90 PS; 89 bhp), 81 kilowatts (110 PS; 109 bhp) and 96 kilowatts (131 PS; 129 bhp) outputs.

All engines over 96 kilowatts (131 PS; 129 bhp) have a standard six-speed manual transmission. Rear suspension was by semi-independent torsion beam for most variants, whilst high-end and 4WD models were fitted with a multi-link independent rear suspension. All versions came with disc brakes on all four roadwheels (the front ventilated, and in some cars the rear too).

In Mexico, the León became a very popular car with upper class young people. The only problem the León has suffered in Mexico is the fact that the sport tuned suspension of the León is not designed to withstand the constant road imperfections such as potholes and speed bumps that abound in Mexican roads.

In Switzerland, there was another official version tuned by Abt Sportsline of the León called "SEAT León Cupra 4 Kompressor". This version had the same 4WD and 2.8 litre VR6 but with 206 kilowatts (280 PS; 276 bhp) and 323 newton metres (238 lbf·ft) of torque.

Factory production of the Typ 1M ended in May 2006. However, the appreciation for the SEAT León Cupra R Mk1's appeal remained clear - still up to the 'best hot hatchback of all time' poll conducted in 2010 by the British magazine Autocar, in which its readers honoured the Cupra R with the seventh position in the top ten list of hatchbacks of all time in their preferences. 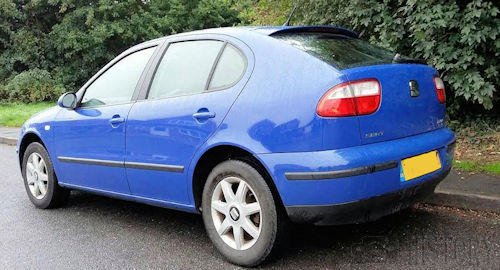