The third generation of the León is based on the Volkswagen Group's latest MQB platform.

Compared to the previous generation, the León Mk3 is shorter by 5 cm (2 in) and lighter by up to 90 kilograms; however, because of its extended by 5.8 cm (2.3 in) wheelbase it has a roomier cabin, with greater shoulder room for the front and rear passengers, more rear legroom and 380 litres (13 cu ft) of boot space.

It features new safety equipment, such as driver knee airbag, and a number of new safety systems, including a multi-collision breaking system to automatically brake the car after an accident in order to avoid a second collision, a lane-keeping assistant, and driver fatigue detection. 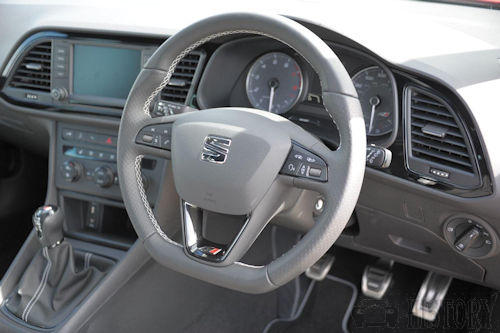 At the interior, there is a driver-oriented centre console hosting a 5.8-inch touch-screen infotainment display with a proximity sensor, also used in the Volkswagen Golf, as well as ambient lighting.

A new feature available for the first time in its class are the optional full-LED headlamps combined with a full beam assistant, offering numerous advantages as the improved illumination with a close to the daylight colour temperature, the low energy consumption and their extended life cycle.

The car has also a new "SEAT Drive Profile" system which allows the driver to choose between four different driving settings: eco, normal, sport, and an individual setting. This system controls the behavior of the engine, steering, and DSG gearbox. Additionally, the 1.8 TSI 180PS and 2.0 TDI 184PS engine-equipped models will vary their engine sound via a sound actuator, as well as their interior ambient lighting between white (normal, eco and individual) and red (sport).

SEAT announced in early 2012 that the range will include for the first time three-door and estate models in addition to a five-door. 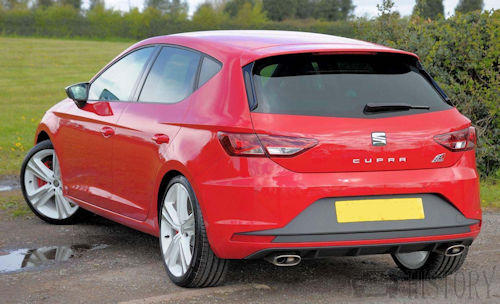