The Saab 96 was an automobile made by Saab. It was introduced in 1960 and was produced until January 1980. Like the 93 it replaced, the 96 was a development from the old Saab 92 chassis and, on account of its improvements and modernisation, it opened new markets for the company. It was the car for which the marque Saab became internationally known, not least because of its safety innovations and its motor sport successes. It was the first Saab model officially imported to the UK.

The bodywork differed little from that of the Saab 93, but the rear had undergone improvements in 1960, providing more boot space, a larger boot opening, and a much larger rear window with better visibility. The original 'bull-nose' front section of the 96 was lengthened for 1965 models, in preparation for a new engine, and the radiator was placed ahead of the engine, rather than above and behind, a leftover from the thermosiphon cooling days. Both front and rear windows were enlarged slightly for 1968 models. In 1969, the Saab 99 appeared, which was a much more modern concept that was designed to replace the 96. However, the latter continued until 1980, by which time the new, longer 900 had appeared in 1979, which eventually replaced the 99 in 1984.

The Saab 96 had a longitudinally mounted engine layout, as first designed, it had a 750 cc, 38 hp (28 kW) three-cylinder Saab two-stroke engine. By 1963 this was increased to 841 cc, 40 hp (30 kW). An optional 57 hp (43 kW) version of the engine, with triple carburetors and oil injection, was used in the Sport and Monte Carlo models. The additional power was obtained from a modified cylinder head and filled crankshaft counterweights offering higher overall compression ratio. The SAAB 96 of 1964 was tweaked to 42 hp (31 kW). For 1966 models, the standard 96 841 cc, 46 hp (34 kW) engine, using pre-mix oil, appeared with a three throat Solex carburetor in which the center carburetor handled start, idle, and low speed functions. The same carburetor had been used in the Monte Carlo and Sport models. A common throttle shaft minimized carburetor synchronization problems.

In 1967 the 96V4 appeared, with the Ford Taunus V4 engine, a four-stroke 1498 cc V4 engine, originally developed for the 1962 Ford Taunus 12M. Saab's project to source a four-stroke engine was dubbed 'Operation Kajsa'. Four-stroke engines had been tested earlier. Between 1962 and 1964 Kjell Knutsson and Ingvar Andersson under Rolf Mellde tested three different engines, Lloyd Arabella 897 cc and 45 hp, a Morris Mini 848 cc, 33 hp engine and a Lancia Appia engine of 1089 cc and 48 hp. However Rolf Melldes view that Saab needed to switch to a four-stroke engine was stopped higher up by CEO Tryggve Holm. Mellde then went behind the back of Holm and made contact with Marc Wallenberg, son of Marcus Wallenberg, Saab's major stockholder. The coup succeeded and testing could begin. The tested engines were Volvo B18, Ford V4, Triumph 1300, Lancia V4 engine, Opel, Volkswagen and Hillman Imp.

The B18 was the most reliable, but the Ford V4 was not far behind and significantly easier to fit into the engine bay of the 96. The testing was done in secrecy. Rolf Mellde took a leave of absence and said he was going to run his father's paint shop. In reality he went to Desenzano in northern Italy with a 96V4 prototype for testing. With five months to go before production only seven persons knew about the new engine. To maintain secrecy they rented a house west of Kristinehamn. To keep purchases of V4 specific parts secret they started the company Maskinverktyg AB. The ordinary purchase department at Saab was oblivious to what was going on, something that caused an incident when Rune Ahlberg cancelled the orders for cables for the two-stroke engine and the purchase department called the supplier and sharply told them to keep their deliveries. The last week of July, just before the summer holidays, the information about the new engine was given to some more people and they were informed that full scale production would start in four weeks. To keep secrecy, 40 of the ordinary staff was told to report to work to fix a problem with the disc brakes. The secret was kept until a journalist some days before the official introduction noticed a lorry loaded with 96s that had V4 stickers on the front bumpers.

Throughout its life span, the Saab 96 and its station wagon sibling, the Saab 95, had the gear lever mounted on the steering column. This became an increasing rarity in the auto industry during the 1960s and '70s, but was an appreciated feature among rally drivers who could change gears faster than with a floor-mounted lever.

The gearbox originally had three gears, the first unsynchronised. Later, a four-speed option, with synchromesh first gear, was offered and the three-speed was phased out.

An unusual feature of the Saab drivetrain was a 'freewheel' (overrunning clutch). This allowed the transmission to run faster than the engine, such as when decelerating, or descending a long hill. Although such freewheels had been provided in other cars before as an economy measure, they were required in the Saab because of the limited lubrication in the two-stroke engine. A petroil-lubricated two-stroke requires lubrication according to its speed, but provides this lubrication according to the amount of its throttle opening. Where the engine operates at high RPM and low throttle (such as when coasting down a long hill), the lubrication provided may be inadequate. With the freewheel, a coasting engine could reduce its speed to idling, thus requiring only the small lubrication available from the closed, coasting, throttle. In certain higher-performance models and in later two-stroke models, direct injection of oil into the engine from a separate reservoir allowed lubrication to be a function of engine RPM and rendered mixing of oil with gasoline unnecessary.

Freewheeling was retained in the four-stroke variant, until the end of production and in the Saab 99 with the 1709 cc Triumph engine. A minor drawback to the freewheel, particularly for drivers unfamiliar with the Saab, is that it makes engine braking unavailable except when, in later models, it could be manually engaged or disengaged by a control in the footwell.

The front suspension used double wishbones and coil springs, while the rear suspension was a trailing U-beam axle with coil springs. Telescopic dampers were used for all four wheels. Earlier models had drum brakes all around. Later models were fitted with front disc brakes.

The Saab 96 was also available as a station wagon (estate) version, sold as the Saab 95 (not to be confused with the later Saab 9-5).

The Saab 96 was driven most famously by Erik Carlsson, in many international rallies. His most famous successes were first in the 1960, 1961 and 1962 RAC Rallies and first in the 1962 and 1963 Monte Carlo Rallies. It was these successive, top-level victories that put the Saab 96 'on the map' and established its reputation for reliability and toughness. Carlsson also competed in the East African Safari Rally. Famous rallying names such as Simo Lampinen, Per Eklund, Pat Moss-Carlsson, Tom Trana, Stig Blomqvist and Carl Orrenius have also been connected with the Saab 96.

The Saab 96 was outlived by the Saab 99 and ultimately replaced by the Saab 900, introduced the previous year. A total of 547,221 were made. Its place at the Uusikaupunki plant was taken over by the similar sized Talbot Horizon. 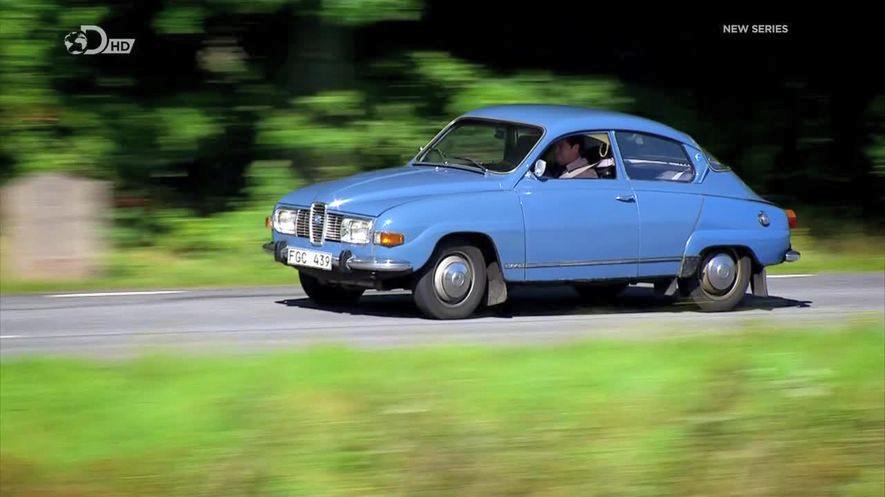