Engine management for the turbos was by Saab Trionic 5 with Direct Ignition (SDI) and Automatic Performance Control, and for non-turbos by Bosch Motronic fuel injection. A distributor-operated ignition system was provided for naturally aspirated engines in some markets.

The 'Sensonic' clutch variant, (available on Turbo models only) provided a manual gear lever as in a standard manual transmission car, but omitted the clutch pedal in favor of electronics which could control the clutch faster than an average driver.

When a driver started to move the gear shift knob/gear selector lever, a computer-controlled actuator operated the clutch. With the car in gear but stationary, the clutch was released only when throttle was applied. If neither brake nor gas pedal was depressed, a warning tone sounded and a message flashed on the on-board display, and if no action was taken after 7 seconds, the engine was shut off.

A "Hill Start" function for Sensonic-equipped cars (as described in the owner's manual) was intended to assist in getting underway on hills, by engaging the car's clutch to prevent rolling backward. However, this feature was not actually implemented on the car.

Sensonic was discontinued after a short time, as it proved unpopular.

The NG900 introduced the Saab Information Display, or SID (available on S or SE models only), which gave the driver real-time information while driving, such as fuel efficiency and outside temperature. Base specification cars had a digital clock in place of the SID and a non-digital instrument panel with a mechanical odometer (as opposed to the digital odometer on higher spec models). Interestingly the SID also controls other vehicle components, including but not limited to audible warnings for turn signals and the vehicles horn.

One Saab innovation, inspired by the company's roots in aeronautics, was the 'Black Panel' feature (available on S or SE models only), which extinguished most instrument panel lights at the touch of a button on the SID, to eliminate distraction from dash lights during night driving. While active, this feature permitted darkened instruments to re-illuminate themselves when they required driver attention - if say, the engine speed increased alarmingly or if the fuel level should drop below 15 litres (4 US gal).This feature was later renamed 'Night Panel' in Saab 9-3 and Saab 9-5 models. In the later Night Panel version, the speedometer is only illuminated up to the 87 mph/140 km/h mark. The remainder of the scale will only be illuminated if the speed of the car exceeds 84 mph/135 km/h.

Under the wings of General Motors, Saab was reckoned as a luxurious brand. This meant that the NG900 would be more expensive than the Opel Vectra, which shared the same platform. Also, it would even make the bottom of the range 900i more expensive than the Vectra. This followed the prices of the 900i to be dropped, making it lack a rear-window wiper, the exclusive SID, and having a different instrument layout with a mechanical odometer instead of a digital.

The 900i was only available in Europe, Australia, New Zealand and Japan as a three-door or a five-door with a choice of a 2.0 or 2.1 L engine. It did not sell very well in the UK and Australia, where the S and SE models were more popular among most Saab drivers. Though it was popular as a cheaper alternative to the S and SE models among many drivers. 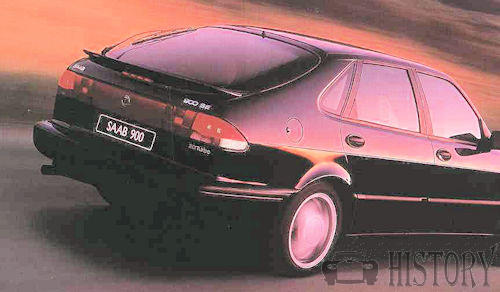