In the 1950s, Rolf Mellde—a Saab engine developer and race enthusiast—along with Lars Olov Olsson, Olle Linkdvist, and Gotta Svensson, designed a two-seat roadster prototype in a barn in Åsaka, near Trollhättan (the site of the main Saab manufacturing facility). The limited research-and-development project, with a total budget of only 75,000 Swedish kronor, became known as the Sonett, a name derived from the Swedish phrase Så nätt den är ("how neat it is", or more literally "so neat they are").

With a projected top speed of 120 mph (190 km/h), the Sonett I had the prospect of success on the European race circuit, and a production run of 2,000 units was planned for 1957. However, race competition rules changed, permitting modified production cars into race classes that Saab had envisioned for its purpose-built Sonett, and the economic and marketing viability of the project faded.

Only six Sonett I vehicles were made, between 1955 and early 1957. The original prototype, known as "#1" and built with a manually crafted glass-reinforced plastic (GRP, or "fiberglass") body, served as the reference model for the other five cars. An extremely rare vehicle, only two Sonetts I exist in the United States;one is in the GM Heritage Center collection.

In September 1996, rally driver Erik Carlsson broke the Swedish record for the under–750-cc engine class with a speed of 159.4 km/h (99.0 mph) in the restored Sonett I original prototype "#1" 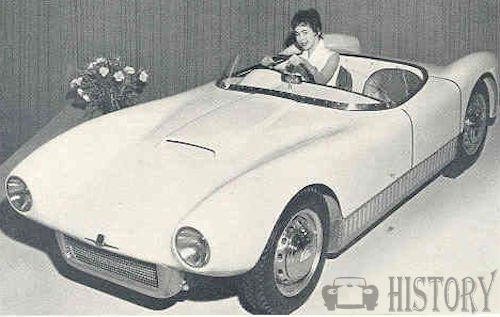