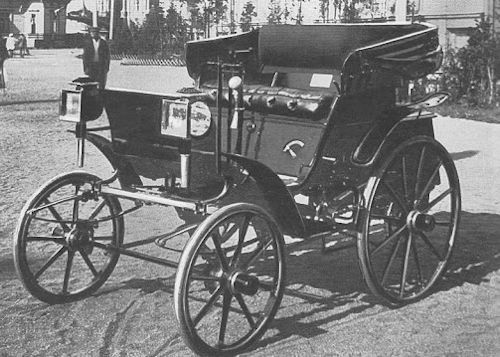 Manufactured at .E,A, Yakovlev Works, St Petersburg.
The pioneer of all Russian automobiles, the Yakovlev-Freze was a two-seater of rather crude construction with a single-cylinder 2hp rear engine.

Its creators, Eugene Yakovlev and Pyotr Freze, partnered after seeing the German Benz car at the World Exhibition in Chicago in 1893. Mr. Yakovlev, had been working on his own model of the internal combustion engine and held multiple patents for kerosene and gas-powered engines; Mr. Freze was an engineer who also owned a carriage-building business.

Power from the engine was transmitted to the differential by two rubber drive belts that could be lever-shifted on to discs of different diameters and engaged by a second lever, A split axle was linked with the rear wheels.

The ignition was electric, generated from an innovative dry-element battery and a patented spark plug. and road speed was estimated at over 13mph.

A winter modification was built with a slide device on the front and toothed chains on the rear wheels. The Y-F was displayed at the 1896 Industrial Exhibition at Nijny-Novgorod caused considerable acclaim according to news reports of the time.