ZMA (Russian: ЗМА) is a Russian car maker located in Naberezhnye Chelny, Republic of Tatarstan. It produced Oka micro-car under VAZ license. Most of the stock was owned by KamAZ, until March 2005, when SeverstalAvto bought the factory.

ZMA is a Russian manufacturer of small cars. It was created on the basis of Decree No. 575 of 21 June 1985 the Council of Ministers of the USSR, as a standalone company, a subsidiary of KamAZ . Its headquarters are in Naberezhnye Chelny (Tatarstan). The plant construction was completed in November 1987 and the first car - a 1111-КамАЗ "Кама" came off the assembly line Dec. 21, 1987.

The company was purchased in March 2005 by Severstal-Avto who decided to stop production of old models and convert the company into the assembly and production of cars on behalf of foreign automakers. 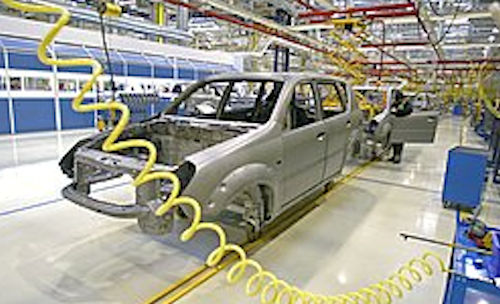