Uralvagonzavod (UVZ) is a Russian machine building company located in Nizhny Tagil, Russia. It is one of the largest scientific and industrial complexes in Russia and the largest main battle tank manufacturer in the world.

The plant was built during 1931-1936 (mostly during the second five-year plan), launched on October 11, 1936, and named after Felix Dzerzhinsky. Initially it manufactured freight cars.

After the German invasion of 1941, Stalin ordered hundreds of factories in Ukraine and western Russia to be evacuated east. The KhPZ Factory No. 183 in Kharkiv was moved to Nizhny Tagil by rail, and merged with the Dzerzhinsky Works, to form the Stalin Ural Tank Factory No. 183. During the second world war it became the largest producer of tanks in the world, including the T-34. After the war, tank production was scaled down, and part of the Vagonka's manufacturing and design assets were transferred back to Kharkiv's Diesel Factory No. 75 during 1945–51.

After the war it was expanded to produce machinery of other destinations: agricultural, construction, aviation, and space, including design and production of the Vostok, Voskhod, Proton and Energia expendable rockets.

It is the location of the Kartsev-Venediktov Design Bureau (OKB-520) where the T-54A and T-55 (development of Morozov's T-54), T-62, T-72, and T-90 tanks have been designed, and was working on one possibility for a next generation main battle tank, rumored to be called the T-95, until this project was cancelled in May 2010. It also manufactures Russia's newest Main Battle Tank, the T-14 Armata.

Its gradual privatization was planned, beginning in 2006. As of December 27, 2016, UVZ has been transferred to Rostec, following a presidential decree.

Production of T-90 main battle tanks accounts for 18–20% of the company's overall production. In 2008, Uralvagozavod produced about 175 tanks: 62 T-90A for the Russian Ministry of Defence, 60 T-90S for India . This represents the highest level of tank production at Uralvagonzavod and in Russia as a whole since 1993. Moreover, according to Moscow Defense Brief, it would appear that in 2008 the number of tanks produced by the company was greater than the number of main battle tanks produced in all the other countries of the world taken together. 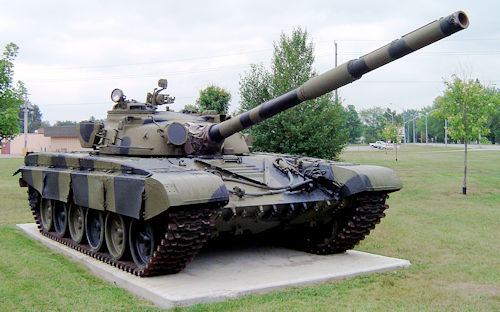