Russian Automotive manufacture ,Russia From 1929 to 2010

OAO Moskvitch was a privatized venture name given to the former factory in order to avoid legal issues after the dissolution of the Soviet Union in 1991. Since the factory had no assembly branches outside Russia after 1991, its name is largely used today to refer to the building located in the lower eastern part of Moscow and abandoned since 2006.

The word moskvich (Russian: москвич) itself translates as "a native of Moscow, a Moscower". It was used to point out the original location of the cars manufactured in the capital of Russia, Moscow.

In 1929 the construction of Moscow Automotive Plant began with initial production of 24,000 vehicles. Between 1940 and 1941, it built the two-door compact car KIM 10-50 and its "Phaeton" version KIM 10-51. In 1941, after having produced less than 1,000 units, the plant was evacuated to Ural and the entire production converted for the manufacture of military equipment after Hitler's invasion during World War II. After the war, the production of the KIM cars was not resumed, and instead the Soviet Union acquired an Opel manufacturing line from Brandenburg in Soviet occupation zone of Germany to manufacture the modified Opel Kadett under the name Moskvitch-400 in December 1946. 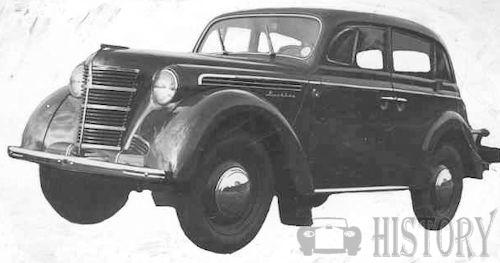 In the 1950s and afterwards the factory, now called MZMA (Moskovsky Zavod Malolitrazhnykh Avtomobiley, that is, Moscow Compact Car Factory), replaced it with its own cars developed by Soviet engineers: the second post-war generation consisting of the Moskvitch-402–407 and 410, then by the more advanced Moskvitch 408, 412 and 2140. The M-407 was the first Soviet automotive export to be truly successful in the West. Up to half of all M-407 production was exported for a number of years, mainly to the Eastern Bloc countries, Norway, Finland, and France. Later models also proved a good value in Great Britain, Finland, and Norway, for instance, and in 1968, 55% of production was for export. In 1969, the factory changed its name to AZLK (Avtomobilny Zavod imeni Leninskogo Komsomola, which means Automobile Factory in honor of Komsomol Leninist Communist Youth Union). 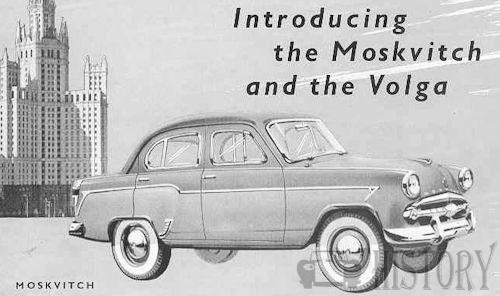 Moskvitch cars were sturdy, reliable on substandard roads and were offered at an affordable price. The 1960s and early 1970s were the glory days, when the cars were exported to many countries throughout the world. Demand always exceeded production, so people had to wait a long time for a new car. Until the 1980s all Moskvitch cars were compact rear-wheel drive saloons and estates with solid rear axles suspended by leaf springs. 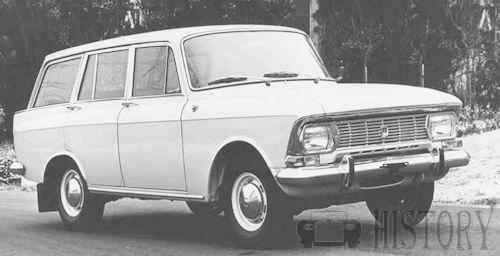 1986 saw the unveiling of a completely new model, known as the Moskvitch-2141 Aleko, which was often upgraded and restyled during the period of its production. It was powered by the 1.5L UZAM used in 412 model and VAZ-2106 1.6L in-line four-cylinder engines, which had by then amassed an acceptable track record powering a number of LADA models. Aleko was different from any model the factory had made previously: it was larger and more luxurious, made with comfort, safety and aerodynamics in mind. The new car had such innovative features as front-wheel drive, a hatchback body style, MacPherson strut front suspension and torsion-crank rear suspension. It had rack-and-pinion steering and a collapsible steering column. The 1.8 liter gasoline engine for the new car was planned, but never materialized, as was also the case with a diesel version. In the early 1990s AZLK still remained one of the largest auto companies in the USSR. Design and experimental work was prepared to create a new model car (sedan M-2142) and an engine plant. However, after the dissolution of the Soviet Union, due to a financial crisis, disruptions in the work of the company and financial mismanagement the engine plant was not finished and the Moskvitch company fell into decline. Because of its location, Moskvitch was in a more vulnerable position than companies located in other regions, as the cost of living and car production in Moscow began to grow rapidly.

The factory, which had been renamed to OAO Moskvitch (Moskvitch Joint-Stock Company) in the early 1990s, filed for bankruptcy in 2002 and ceased production. Unfinished bodyshells remained on the production line in various stages of completion, while furniture, computers, office supplies, and documents remained in the plant's administration building. Several attempts to restart production have been made over the next 3 years, but none were successful.

Recently, a portion of the abandoned plant was acquired by OAO Avtoframos, a 38%-62% joint venture between the City of Moscow and French automaker Renault SA. In 2005, Avtoframos commenced assembly of Renault Logan sedans from imported complete knock-down kits (CKDs). The presence of Avtoframos brought new life to a small part of the facility, but the majority of the sprawling plant remains abandoned, apparently still owned by the dormant Moskvitch company.

The bankruptcy of OAO Moskvitch was officially announced in 2006 and the company was liquidated the following year.

Since 2009, the owner of the brand Moskvitch is the German automotive company Volkswagen. In 2011, the company extended its brand ownership rights until 2021, a 10-year period.