The VAZ factory is the largest car manufacturer in Russia and Eastern Europeand one of the largest in the world, with over 140 kilometres (90 mi) of production lines; it is unique in that most of the components for the cars are made in-house.

The company was established in the late 1960s in cooperation with Fiat, with Viktor Polyakov (later Minister of Automobile Industry) as director, and Vladimir Solovyov being the chief designer,and intended to produce popular economy cars that would meet the growing demand for personal transport. It was set up as a collaboration between Italy and the Soviet Union and built on the banks of the Volga River in 1966. A new town, Tolyatti, named after the Italian Communist Party leader Palmiro Togliatti, was built around the factory.The Lada was envisaged as a "people's car" like the Citroën 2CV or the VW Type 1. Production was intended to be 220,000 cars a year, beginning in 1971; car production actually began before the plant was finished in 1970. The VAZ trademark, at first, was a silver Volga boat on a red pentagonal background, with "Togliatti" superposed in Cyrillic (Тольятти); the first badges, manufactured in Turin, mistakenly had the Cyrillic "Я" rendered "R", instead (ТольRтти), making them collector's items. 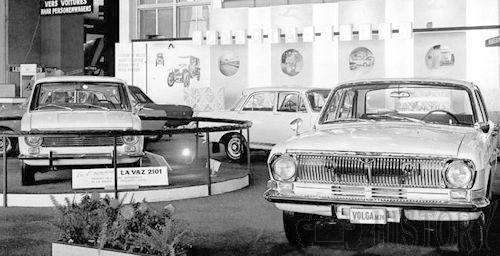 The lightweight Italian Fiat 124, which had won the 1967 European Car of the Year, was adapted in order to survive treacherous Russian driving conditions. Among many changes, aluminium brake drums were added to the rear, and the original Fiat engine was dropped in favour of a newer design made by NAMI. This new engine had a modern overhead camshaft design, but was never used in Fiat cars. The suspension was raised to clear rough Russian roads and the bodyshell was made from thicker, heavier steel. The first Lada models were equipped with a starting handle in case the battery went flat in Siberian conditions, though this was later dropped. Another feature specifically intended to help out in cold conditions was a manual auxiliary fuel pump. About 22,000 VAZ-2101s were built in 1970, with capacity at the end of 1973 reaching 660,000 a year; 21 December, the one millionth 2101 was built. A third production line was added in October 1974, boosting output to 2,230 cars a day. The same year, total VAZ production reached 1.5 million. 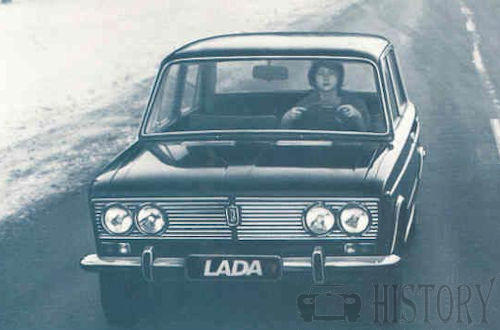 Exports to the West began in 1974; Ladas were sold as in several Western nations during the 1970s and 1980s, including Canada, the United Kingdom, France, Belgium, Luxembourg and the Netherlands, though trade sanctions banned their export to the United States. Under the original agreement with Fiat, the car could not be sold in competition with the 124 until its replacement (the Fiat 131 Mirafiori) had been released and all Fiat production of the 124 had ceased.

Engines fitted to the original Ladas start with the 1.2 L carubretted in the original and go up to the 1.7 L export model set up with a General Motors single point fuel injection system. Diesel engines were later fitted for the domestic market only. The drivetrain is a simple rear-wheel drive setup with a live rear axle. The engine is an inline four with two valves per cylinder and a single overhead camshaft.

The Fiat-derived Ladas featured various headlights, trim and body styles. The original, Fiat-based models included the VAZ-2101 sedan and the VAZ-2102 station wagon. 1972 saw the introduction of a deluxe version of the sedan, VAZ-2103, which was based on the Fiat 124 Special and featured a new 1.5 L engine and twin headlights. In 1974, the original VAZ-2101 was updated with new engines and interiors, whereas the VAZ-2102 underwent the same improvements in 1976. The body style with two round headlights was manufactured until 1988.

The VAZ-2106, introduced in December 1975 as an updated version of the VAZ-2103, was based on the 1972 Fiat 124 Special T, featuring different interiors and new 1.6 L engine. The 2106 was one of the most popular rear-wheel drive AvtoVAZ models in the past; its production ended in 2001 from Tolyatti, but continued at Izhavto (Izhevsk), ending there in December 2005.

In 1974, VAZ was given permission to begin producing Wankel engines under licence from NSU.Work began in 1976, with a single-rotor Lada appearing in 1978; the first 250 of these went on sale in the summer of 1980.

The VAZ-2105, based on the Fiat 124 mechanicals but modernised and restyled, was introduced in 1979 and marketed outside the Soviet Union under the Riva or Laika trade names, depending on the country. Square headlights and new body panels distinguish this car from the earlier models. A deluxe version, VAZ-2107, was out in 1982; it featured a better engine, refined interiors and a chrome radiator grille. In 1984, the VAZ-2104 station wagon completed the line-up. After about thirty years of production, the 2105 was discontinued in 2010, followed by the 2104 and 2107 in 2012. It is the third best selling automobile platform after the Volkswagen Beetle and the Ford Model T, and one of the longest production run platforms alongside the Volkswagen Beetle, the Hindustan Ambassador and the Volkswagen Type 2. 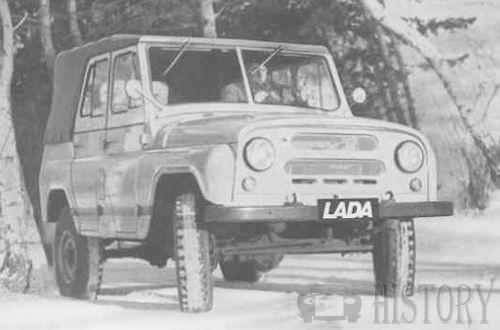 After having built a number of prototypes and experimental vehicles, AvtoVAZ designers launched the first car entirely of their own design, the VAZ-2121 Niva, in 1977. This highly popular and innovative SUV was made with off-road use in mind, featuring a gearbox with a central differential lock lever as well as a low- and high-range selector lever. It has an original body style and the most powerful 1.7 L engine in the VAZ range (originally 1.6 L VAZ-2106 engine, further enlarged to 1.7 L in the 1990s). The Niva has also been available with 1.9 L Peugeot-sourced diesel engine. The Niva is still in production.

Based on the success of the Niva, the design department prepared a new family of front-wheel drive models by 1984, which was of a completely domestic design. Production started with the VAZ-2108 Sputnik three-door hatchback, the series was commercially known as Samara. It was the first front-wheel drive serial car built in the Soviet Union after the LuAZ- 969V.The Samara engine was mostly designed and produced in-house, had a new single overhead camshaft (SOHC) design and was driven by a more modern rubber belt. The combustion chambers were developed in collaboration with Porsche. Its line-up featured a completely new body and interiors, front MacPherson strut independent suspension and rear torsion bar, rack and pinion steering, and an updated five-speed gearbox. The five-door VAZ-2109 hatchback followed in 1987, and the four-door 1.5 L sedan, the VAZ-21099, was introduced in 1990. The same year, the front sides and radiator grille were restyled on the whole Samara range. 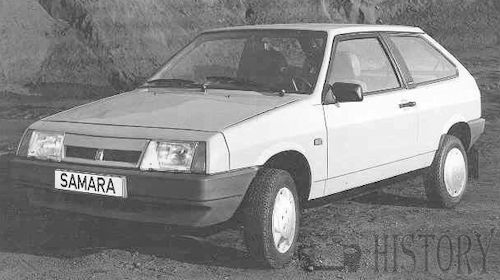 The VAZ-1111 Oka micro-car was introduced in 1988, and in 1991 the production was transferred to the KamAZ and SeAZ factories.

The VAZ-2120 Nadezhda minivan is based on the original Niva and was in low-volume production in 1998–2007. A five-door version of the Niva, the VAZ-2131, is produced since 1995. The dissolution of the Soviet Union delayed the production of new 110-series by a couple of years. The VAZ-2110 sedan was introduced in 1995, the 2111 station wagon followed in 1998 and the 2112 hatchback completed the range in 2001. These models are basically based on Samara mechanicals, with a new body and fuel injected engines as standard features, though carbureted versions have also been available up until 2001. The 110-series remains in production and has been continually updated over the years. For example, engines used to be 1.5 L units with either 8 or 16 valves, but these have now been upgraded to 1.6 L units that meet stricter emissions rules.

By the end of 2010, after the global financial crisis, automotive production in Russia had returned to pre-crisis levels.Nine out of the ten most sold models in Russia in 2010 were domestically produced, with Avtovaz's Lada models topping the list. In the first 7 months of 2010, sales of Lada cars increased by 60%.

In 2014, AvtoVAZ sold 448,114 vehicles, down 16.3 percent comparing to the previous year, due to the overall market slowdown in Russia. The total production of the Togliatti factory is 910,000 vehicles.

Each model has an internal index that reflects the level of modifications, based on the engine and other options installed. For example, the VAZ-21103 variant has the 1.5 L 16V engine, while the VAZ-21104 uses the latest 1.6 L 16V fuel injection engine. Since 2001, trim levels are also indicated by including a number after the main index: '-00' means base trim level, '-01' means standard trim and '-02' designates deluxe version; for example, VAZ-21121-02 means Lada 112 hatchback with an 1.6L SOHC engine and deluxe trim.

The car's name is formed from 'VAZ-index model name. The classic Fiat 124-derived models were known on the domestic market as Zhiguli (Жигули) until the late-1990s, when the name was dropped; thus, the 2104-2107 range, as well as 110-series, actually lack a model name. The restyled Sputnik range was renamed Samara, but the Niva and the Oka retained their names. By the 2000s (decade), the VAZ designation was dropped from market names in favour of Lada and simplified export naming conventions were adopted, so VAZ-2104 effectively became Lada 2104, VAZ-2110 became Lada 110, VAZ-2114 became Lada Samara hatchback or Lada 114 and so on, though model indices continue to be used in both technical and marketing materials.

The model names varied from market to market and as such should not be used except to indicate a certain export market. Instead, it is advisable to refer solely to the model number as these are the same for all markets.