In December 1994 the revised R6 model appeared. In the United Kingdom, Rover finally scrapped the Metro nameplate, replacing it with a new name, Rover 100, which had been adopted on continental Europe on the Rover Metro's launch in 1990, due to the weakness of the Austin marque in Europe.

The mechanics of the car remained much the same with 1.1 and 1.4 petrol engines and Hydragas suspension, but there was now the option of a Peugeot-sourced 1.5 diesel rather than the previous 1.4. The exterior was altered in an attempt to disguise the car's age, meet the increased cooling requirements of the Peugeot motor and offer a reduced-format Rover family grille. This was achieved through fitment of new front and rear bumpers, sill covers, rear boot handle and lamps headlamps, bonnet and grille.

A variety of bolder paint colours and the use of chrome trim helped give a more upmarket appearance. The interior trim was revised to give a greater impression of quality and luxury, but as there were no changes to the basic architecture it was considered by many as being short on space and outdated in comparison to its most modern rivals (most of which had been replaced with all-new models since the launch of the Rover Metro) It was criticised by the press for its lack of equipment, with front electric windows only available on the range topping 114 GSi. Rear electric windows were never an option on the 100. Neither were Anti-Lock Brakes, Power Steering or a rev counter (except the GTa and later manual 114 GSi models) One saving grace for the 100 was the option of full leather trim, a rarity in a small car and coupled with the standard wood veneer dashboard inserts, a tinted glass sunroof and the optional wood veneer door cappings, the 114 GSi made for traditional luxury motoring; an image Rover was trying to retain. The only safety efforts came in the form of an optional drivers airbag, an alarm, a passive engine imobiliser, a removable radio keypad, central locking and side intrusion beams. Overall, the 100 series was considered a rather typical facelift of a car which had been a class leader on launch but had now been overtaken by events. 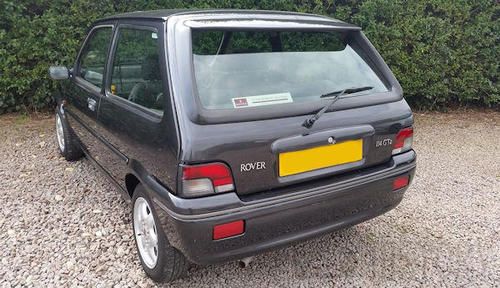 A 'hot' version of the 100 called the 114 GTa was available from launch. The main differences over the 114 SLi three-door - which has the same engine - was sports seats, red seatbelts, a rev counter, sports suspension, a slightly higher top speed, faster acceleration, GSi alloy wheels and GTa badging. It was only available as a three-door.

In 1997, the Rover 100 gave a poor performance in EuroNCAP crash tests (despite the improved safety features, including side impact bars in the doors and an optional driver's airbag, the 1970s design was showing its age) - it was at the time the only car tested to receive a one-star Adult Occupant Rating. Other superminis tested at the same time received 2 or 3 stars out of five. The passenger compartment was subjected to severe structural damage in the frontal-offset test and results showed a high risk of injury to all body regions for the driver. Meanwhile, the side impact test also showed high injury risks.

The Rover 100's dismal safety showing was not its only problem by 1997. It was fast falling behind the best cars in its sector when it came to design, build quality, refinement and specification, although it remained strong in terms of fuel economy and affordability. Unlike the Ford Fiesta, Volkswagen Polo and Vauxhall Corsa, the Rover 100 could still provide sub-£7,000 motoring.

Facing a complete collapse of sales, Rover withdrew the 100 from production - marking the end of nearly 18 years of production.

There was no direct replacement for the Metro/100, although the 1995 Rover 200 had been developed inside Rover Cars to serve as a replacement for the 100 as well as the previous 200 model, which was slightly larger. The 100 and 200 were sold concurrently until 1998, when the 100 was withdrawn. When the Rover 200 was facelifted in late 1999 and rebadged as the Rover 25, Rover marketed this as a supermini reflecting the continued, steady, growth of all car classes. The plan was for the both the 100 and the 25 to be on the market until the launch of the true replacement for the Metro in the shape of the MINI. However, BMW's sale of Rover put an end to those plans. BMW kept the MINI design and MG Rover's notional successor to the Metro was the Rover 25 and its MG ZR badge-engineered relative.

The gap left by the Metro as a true Rover supermini was not filled even in late 2003, when the CityRover was launched – it was a 1.4 engined supermini built in India alongside the Tata Indica. This model was nowhere near as popular as the Metro or even the Rover 100, and was not included in the revived product range by Nanjing Automobile following MG Rover's bankruptcy in 2005. 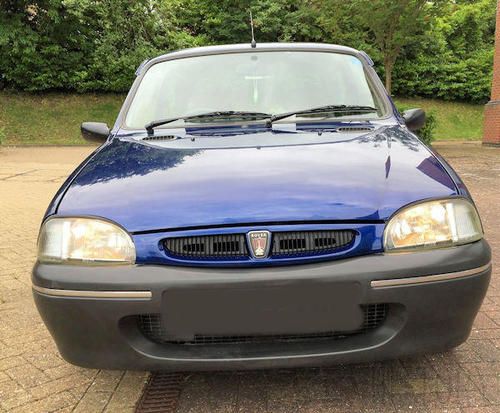