The Rover 75 is a compact executive car produced by British automobile manufacturers Rover Group and later by MG Rover, under the Rover marque. The Rover 75 was available with front-wheel drive in either a saloon or estate body style and latterly, in long-wheelbase form and a rear-wheel drive, V8-engined specification. In 2001, an MG-branded version was launched by MG Rover, called the MG ZT.

The Rover 75 was unveiled to the public at the 1998 Birmingham Motor Show, with deliveries commencing in February 1999. Production of the Rover and later MG badged models ceased on 8 April 2005 when manufacturer MG Rover Group entered administration. Rather surprisingly, it was offered for sale in Mexico, making it the first Rover to be sold in North America since the Sterling.

The Rover 75 started life as part of a group of three new designs for the company under the guidance of Richard Woolley; a large saloon codenamed Flagship, a smaller vehicle (with the codename of Eric), and the 75. Of these only the 75 concept progressed. The initial aim was to re-skin the Rover 600 but following the BMW takeover it was quickly decided that this platform would not be re-used but replaced by an entirely new model.

Work on the new model, codenamed R40, progressed well with little operational interference from BMW; the styling received an enthusiastic response from the management and both companies believed the classical look would be the ideal direction for Rover.

Under the lauded styling was a range of petrol and diesel engines from 1.8- to 2.5-litre sizes. Petrol engines provided were Rover's 4-cylinder K series in 1.8-litre guise and the quad cam KV6, offered in either short-stroke 2.0 or revised 2.5-litre formats. The 2.0-litre was later dropped on introduction of the 1.8-litre turbo for emissions purposes. The diesel unit was BMW's common rail motor, designated M47R. This unit was a mildly de-tuned BMW 2.0-litre turbodiesel, the same core engine being used at the same time in the parent company's 3 and 5-Series models and later found in the Land Rover Freelander from 2001.

Transmissions on all models were either the Getrag 283 5-speed manual, supplied from the company's new facility in Bari, Italy, or the JATCO 5-speed automatic unit—one of the first transverse engine deployments made with this feature.

Braking was in the form of all-round discs, complemented with a Bosch 5.7 4-channel ABS system and electronic brake force distribution. The parking brake was a cable operated drum integral within the rear discs.

Suspension was a MacPherson strut arrangement at the front, anchored by lower alloy L-arms. The wide spacing of the mounting points, compliant bushes and a perimeter subframe gave the model a cushioned yet precise ride with relaxed handling that could be tuned for different markets or model derivatives such as the later MG ZT. The rear suspension, after a period of uncertainty during development, was eventually a version of BMW's Z-Axle arrangement first featured on the 1988 Z1 sports car.

At the time of the launch there had been speculation within the media that the Rover 75 used the BMW 5-Series platform, perhaps due to the overall size of the model, the apparent presence of a transmission tunnel and the use of the parent company's rear suspension system. This was in fact not the case: Rover engineers had used the concept of incorporating a central tunnel which had been explored by BMW as part of their own research into front-wheel-drive chassis design. As the 75 took shape, this core engineering was passed over to Rover and evolved into the Rover 75 structur The tunnel concept, along with the rear suspension system, was also used by the Rover engineers for the design of the Mini.

At launch the Rover 75 quickly attracted praise for its styling and design integrity. Some critics of the car labelled its styling too "retro", suggesting it had been designed with an older buyer in mind, and was not sporting enough when compared to the competition However, the 75 won a series of international awards including various "most beautiful car" awards, including one in Italy.

Assembly originally took place at Cowley but in 2000, following the sale of the company by BMW to Phoenix Venture Holdings, production was moved to Longbridge in Birmingham, England. 2001 saw the introduction of the Rover 75 Tourer (developed alongside the saloon but never authorised for production by BMW), swiftly followed by the MG ZT and MG ZT-T, more sporting interpretations of the model, differentiated by modified, sporting chassis settings and colour and trim derivativesBetween 2000 and 2003, there were few changes to the range, the biggest being the 2.5-litre V6 engine being joined by a low pressure turbocharged 1.8-litre, 4-cylinder engine. The introduction of the 'greener' 1.8-litre turbo greatly benefited British company car drivers who are taxed on carbon dioxide emissions. A customisation programme, Monogram, was launched, allowing buyers to order their car in a wider range of exterior paint colours and finishes, different interior trims and with optional extras installed during production

From June 2002 a factory-approved dual fuel petrol-liquid petroleum gas conversion was available in the UK on 1.8 and 2.5 litre models. The LPG conversion was an after-market undertaking approved by MG Rover. Developed by EcoGas Systems Ltd and Landi Renzo S.R.L. in conjunction with MG Rover Powertrain Limited, the conversion was ordered from Rover dealerships, the cars retaining the three-year factory warranty. The retail price of the conversion was £2,195, but in an effort to encourage LPG use for transport for ecological reasons the UK Government offered a Powershift Rebate of some 60% of the conversion cost. When running on LPG the Rover 75 suffers only a slight reduction in performance compared to running on petrol; LPG fuel consumption is also slightly higher than when running on petrol but this is more than offset by the greatly reduced cost of the fuel.

Rover released the estate body-style of the 75, called Tourer, in 2001. It was designed to offer Rover customers a greater degree of practicality while retaining the 75's sleek looks and high-class image. The tailgate is fitted with a separate opening rear screen, allowing owners to drop items into the boot, without having to lift up the whole door. Once the door is opened, however, the load space is up to 1,480 mm wide and 2,060 mm long. With the seats up there is between 400 and 680 litres of cargo space, and with the seats folded down (in a 60:40 ratio complete with centre load-through hatch) there is over 1,222 litres available.

To improve practicality further, self-levelling rear suspension and an integral load restraint system were added to the options list for the Tourer. Up to 100 kg can be loaded onto the roof, which is higher than rival executive cars of the time, and putting loads into the boot is made easier by the 544 mm sill height. Four hinged chrome lashing eyes are fitted to the floor, and oddment stowage compartments and two recessed hooks are located in the side walls.

A stretched version of the Rover 75—initially called Vanden Plas, then simply Limousine—was introduced in 2002. Developed in conjunction with specialist vehicle builder S. MacNeillie & Son Limited in Walsall, England, the model was stretched by 200 mm in the rear floor pan, with longer rear doors. The extra length, and the fitment of the new premium grille were the only visual clues to the changes made. Available only in Connoisseur specification, production moved to Longbridge after an initial short run by the coach-building partner.

The 75 has been one of the most popular ministerial cars in the British Government. Various ministers were driven around in Rover 75s and Tony Blair had access to a 75 Limousine while he was in power, but was never seen in it.However Alistair Darling was seen in a 'Premium Grille' Rover 75 which could be the 75 Limousine in question.

Rover announced the new V8 model at the Geneva Motor Show also in 2002. This was the second iteration of the modified rear-wheel-drive platform developed by MG Rover and already receiving plaudits from the media. The car also boasted a new grille stretching down from the bonnet shut-line to the bottom lip of the bumper—a style that had also just appeared on Audi's A6, which was not lost on the press.

The Rover 75 V8 was created as a means of proving MG Rover's engineering expertise and to attract a development partner to the company. The car was extensively re-engineered to accommodate Ford's Modular V8 in 4.6 litre capacity, driving the rear wheels to give a car with much higher performance, taking advantage of the stiffening tunnel in the body structure. These cars were built on the standard production line, and then removed to allow the necessary structural modifications to be carried out. The cars were then returned to the trimming lines for completion. Just under 900 were produced in both saloon and Tourer body styles, carrying either Rover 75 or MG ZT trim. The cars had numerous differences to the standard versions, drive train notwithstanding, with non standard heating and ventilation, and brakes and suspension capable of dealing with the extra power. Externally, there is little to indicate what is under the bonnet, other than quad exhaust pipes and a couple of subtle badges, although a large 'premium' grille was fitted to some cars following the 2004 facelift.

In early 2004 Rover face-lifted the design of the 75 to a less retro, more European, look. Changes were restricted to bolt-on components, with more modern bumpers front and rear, bigger door mirrors, one-piece headlights and a sleeker grille. Middle-specification Club trim was dropped, and on Connoisseur trim light oak wood took the place of the original walnut, which remained standard fitment on the entry-level Classic. Rover also added a new trim to the range called Contemporary which featured revised fittings such as larger alloy wheels (SE derivatives), black oak wood trim and sports seats as well as an altered equipment tally. This refresh received mixed reactions from the media.

Initial sales of the Rover 75 failed to match the BMW 3 Series and Audi A4 in the British car sales charts during 1999[ The public unveiling of the car at the Birmingham Motor Show was unfortunately over-shadowed by a speech containing criticism of the British Government's attitude to financial assistance in the redevelopment of the Rover Longbridge factory (where the new Mini was to have been produced) Stunned press reaction interpreted this as saying that BMW were unhappy with continuing financial losses and were intending to close Rover down This undoubtedly scared off many prospective buyers, despite the very positive reaction to the car itself Indeed it did (and still does) hold up very well with the Jaguar S-Type that was unveiled at the same show

The Rover 75 was a familiar sight to Midsomer Murders viewers, with four versions featured from 1999 until 2005: three first generations and a second generation, all with high specification and painted dark colours.

A Mark I also appeared numerous times in the BBC television series Dalziel and Pascoe. Two were in Wedgewood Blue and one in Starlight Silver.

The BMW electronics based Rover 75 incorporates the entire in-car entertainment system (radio function, navigation system, television and telecommunications systems) and is based on a very flexible automotive computer system from BMW As a result the Rover 75 can be easily upgraded with the newest BMW technologies including BMW's Bluetooth system, the DVD based navigation system, and widescreen displays, as well as BMW's CD changers which play MP3s.

The Rover 75 (and MG ZT derivative) were powered by a combination of Rover's own K-Series and KV6 engines as well as Ford's Modular V8 and BMW's M47 diesel engine. The latter was designated M47R to identify the unit as a Rover special, having been tweaked by Rover's engineers for transverse installation, with performance and refinement characteristics unique to Rover 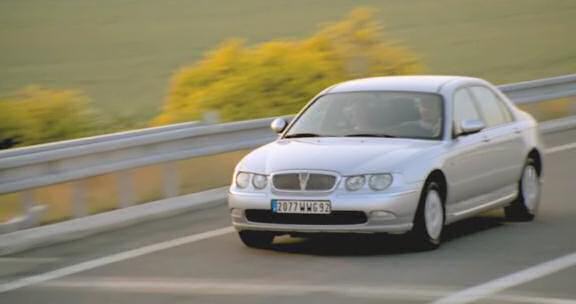