The Rolls-Royce 103EX , which also bears the name Vision Next 100 , is the latest concept vehicle from Rolls-Royce Motor Cars Ltd. With that, Rolls-Royce wants to give a look into the year 2040 with the future of luxury mobility. The vehicle is a strong departure from the usual drive concept of Rolls-Royce with a V12 - engine. The 103EX, however, relies on an electric drive, as Rolls-Royce assumes that there will be no V12 combustion engines in 2040. Already in the 102EX study Rolls-Royce relied on electric motors instead of a combustion engine. The car also has no steering wheel, but drives completely autonomous .

It offers space for two people on a bench seat, who get access to it by means of a combination of a glazed door opening  upwards and a conventional door.The entire roof of the car hinges upwards . The "dashboard" consists of a large display and a Rolls-Royce clock. In front of the passengers is a cargo space in which two custom-made suitcases find space. For easier loading and unloading the loading floor is electrically extendable. The futuristic design is particularly aerodynamic , without giving up the brand identity. The size corresponds approximately to that of the large production model, the phantom . The 28 " huge wheels are partially covered. The headlights are made in laser light technology, the body partially made of carbon. The cooler Spirit of Ecstasy is made of glass and can be illuminated. This feature can already be found in the production models, but the figure is made of Makrolon .

Rolls-Royce has since begun to name the concept cars chronologically starting with Rolls-Royce 100 EX . Deviating from this numbering, this car carries the second name Vision Next 100 . 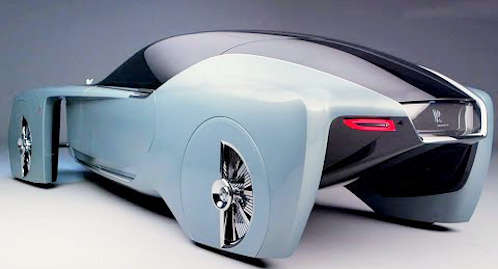