The Rolls-Royce Phantom Drophead Coupé is a British handmade convertible manufactured by Rolls-Royce that debuted at the 2007 North American International Auto Show in Detroit, Michigan, on 7 January 2007. The platform is based on the 2003 Rolls-Royce Phantom and has styling heavily derived from the 100EX, a concept car unveiled to celebrate the company's centennial in 2004. It is currently the most expensive Rolls-Royce model at $443,000. Several Drophead Coupés were featured in the 2012 Summer Olympics closing ceremony.

The exterior remains faithful to the marine-nautical theme of the 100EX. The two-door four-seat convertible features rearward opening coach doors and a two-tone colour scheme that delineates between the upper and lower bodywork and frames the teak wood panelling of the convertible's tonneau cover. Unlike the 2004 concept car, however, the production unit eschews the EX's aluminium bonnet in favour of more easily maintained stainless steel.

The front fascia takes its cues from the 100EX but with the crucial difference of the middle bodywork/raised bonnet/grille assemblage terminating midway down the face rather than continuing downwards and bisecting the front bumper. The headlamps are also taken straight out of the 100EX/101EX concept and are similar to the Phantom's. The deep set rectangular high beams are light-emitting diode (LED) units while the round "faux-foglamp" driving lights are projector-style xenon arc lamps. The exterior is available in more than 44,000 colour combinations.

It combines aluminium technology and hand-crafted materials. All in all, the car continues Rolls-Royce's current design theme, premiered on the Phantom, combining features of luxuriant 1930s Art Deco with cold 21st century "techno-modern". 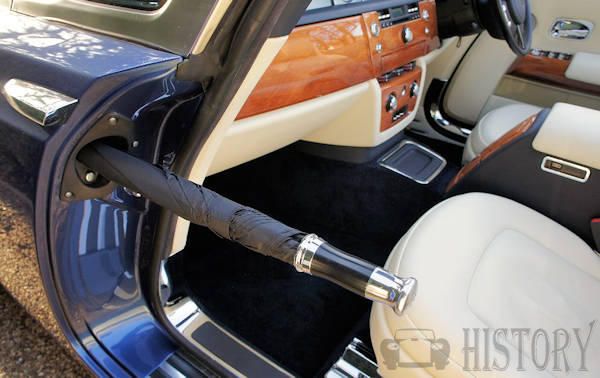 The interior is a modern avant-garde reinterpretation of the traditional English gentlemen's clubroom with stylistic influences ranging from minimalism to Art Deco. Perhaps the car's main design showcase is the yachting-inspired wood veneering that wraps around the 8/9ths top portion of the cabin from coach door to coach door and terminating in a crafted convertible tonneau cover, hand-finished in nautical-grade teak wood panelling sandwiched between an interior band of contrasting hardwood and the bare stainless steel motif of the car's upper exterior bodywork. Similarly with the 100EX and 101EX, the dashboard and the steering wheel are straight out of the Phantom.

A triangular A-pillars with quarter glass, as well as the spring-loaded pop-up rollover hoops behind the rear seats, provide additional strength and protection for the convertible body.

Like other current Rolls-Royce models, the hood ornament, the Spirit of Ecstasy, is retractable with options to have it automatically retract into the bonnet whenever the car is locked or whenever the driver so chooses; the option is selected in the glove box as with the Phantom sedan. The vehicle uses parent company BMW's iDrive system.

In its first year on the market (2007), 253 Drophead Coupés were sold worldwide.

The first car destined for the U.S. market was auctioned at the 2007 Naples, Florida Winter Wine festival charity for $2 million, of which $1.6 million went to the Naples Children and Education Foundation. Purchased by a local real estate developer, the winning bid is believed to be the most expensive new car ever sold in the U.S.

Pininfarina built a version called the Hyperion, based on the Drophead Coupé. The car was unveiled in 2008 Pebble Beach Concours d'Elegance.In 2009 it was sold on the market for £4,000,000.