The Phantom VI was an ultra-exclusive Rolls-Royce model made from 1968-1990.

Based on the Phantom V, the Phantom VI had a re-styled fascia (dashboard) and was powered by an engine derived from the current Rolls-Royce Silver Shadow. Most of the coachwork was created by Mulliner Park Ward, usually in limousines form, though a few landaulettes were made. At least two convertibles were built, one with two doors and the other with four, both by Frua of Italy. At least one hearse was also built—see reference link #4 below.

The Phantom VI was the last Rolls-Royce with separate chassis. It featured coil springs in front, leaf springs in rear, and drum brakes on all four wheels. The car was powered by a twin SU carburettors 6,230 cc (380 cu in) 90 degree V8 with a bore of 104 mm (4.1 in) and stroke of 91.5 mm (3.60 in), coupled to a 4-speed automatic gearbox. In a 1979 upgrade, engine capacity was increased to 6,750 cc (412 cu in), a 3-speed automatic gearbox with torque converter was substituted, and separate front and rear air conditioning units were provided. Inclusion of the engine from the Rolls-Royce Silver Spirit in 1982 increased engine displacement once more, to 6,750 cc.

A total of 374 Phantom VIs were made. Design of a Phantom VII based on the Silver Shadow's body was discussed in the 1970s, but plans were scrapped. No prototypes were built.

Queen Elizabeth II's fleet of cars includes two Rolls-Royce Phantom VIs, the custom-built 'Silver Jubilee Car' presented by the British motor industry to celebrate her 25th anniversary on the throne in 1977, and a more conventional 1986 model. The Silver Jubilee Car, with its raised roof and enlarged glazed area, was the 'Number One State Car' until the introduction of the two Bentley State Limousines in 2002. Like the other state cars, the Phantom VIs have no registration plates and a special mount for a Royal Standard and coat of arms. When in use by the Queen, the Spirit of Ecstasy is replaced by a custom-made solid silver model of St George slaying the dragon.

On the evening of 9 December 2010, the car was attacked by student protestors as it carried The Prince of Wales and The Duchess of Cornwall to the Royal Variety Performance in London. The couple were unhurt, but the car was spattered with paint and one of the side windows was smashed. Whilst the car's windows were toughened, it wasn't armoured. The car was used to carry Catherine Middleton to her wedding to Prince William, Duke of Cambridge.

On September 2010 a Phantom VI which belonged to Mohammad Reza Pahlavi the late Shah of Iran was put on display in Niavaran Palace Complex in Tehran.

A Rolls-Royce Phantom VI dating to 1970 is the State Car of the Governor-General of the Commonwealth of Australia. It is typically used only on rare occasions, such as the State Opening of Parliament or the swearing-in of a new Governor-General.

At least one Phantom was built 1995 by order of the Sultan of Brunei. This car was named Rolls-Royce Phantom V Limousine, even though it was released after the Phantom VI. The exterior is very similar to Phantom VI. It carries the same engine as in the 1995 Silver Spur III, an L410 without turbo and without catalytic convertor.

Three other Phantoms were built between 1995 and 1997, also by order of the Sultan of Brunei. This car was named Rolls-Royce Cloudesque and sometimes referred to as Rolls-Royce Phantom VII. The exterior reminds one of a stretched Phantom V Limousine; the extra length being added at the B-pillar. The boot is redesigned, looking more like that of a Silver Seraph. The headlights were designed in a Silver Cloud III style (but with chromed eyelids), hence the name Cloudesque. 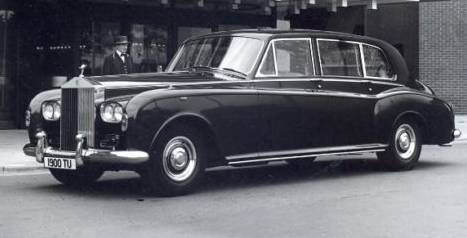