The Phantom V is a large, ultra-exclusive four-door saloon that was made by Rolls-Royce Motor Cars from 1959 to 1968. Based on the Silver Cloud II, it shared a V8 engine and General Motors Hydramatic automatic gearbox with its smaller sibling. Rolls-Royce assembled the cars' chassis and drivetrains with bodies made to standard designs by coachbuilders H. J. Mulliner, Park Ward, and James Young, former vendors absorbed by Rolls-Royce.

A total of 516 Phantom V's were made. Owners included Queen Elizabeth II and her mother, Queen Elizabeth, the Queen Mother. Those owned by Elizabeth II were official state cars, adapted for that purposed with a flag staff and illuminated heraldic shield above the windscreen. Having been retired from active service in 2002, both are now on public display: one in the royal motor museum at Sandringham, and the other in the special garage aboard HMY Britannia in Leith, Edinburgh.

The Governor of Hong Kong used a Rolls-Royce Phantom V for ceremonial occasions. It was removed from Hong Kong by the Royal Navy immediately following the handover to China on 1 July 1997.

Mohammad Reza Pahlavi, the Shah of Iran, was another one of the people who owned an example of this car. Since his exile, the car has been kept in his royal residence in Tehran and is occasionally shown to the public among the other luxurious cars owned by the Shah, including a unique Rolls-Royce Phantom VI and a Phantom IV.

Then Beatle John Lennon's Phantom V, a 1960s counter-culture icon, came from the factory finished in white, with Lennon commissioning the custom paint job atop it in the style of a Romany gypsy wagon (not "psychedelic" as often referenced). 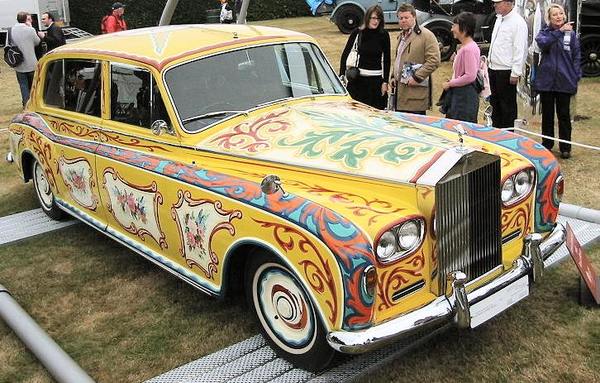