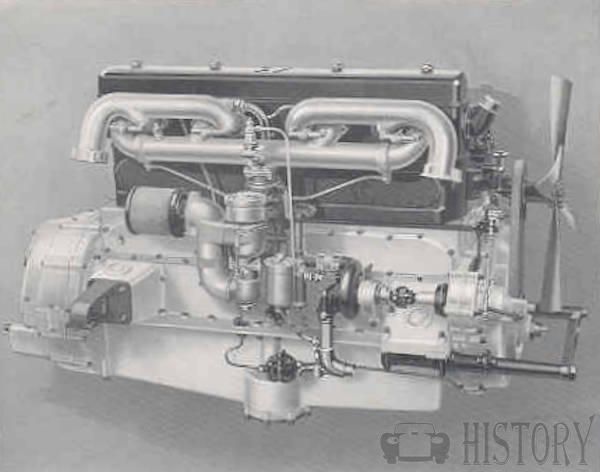 One major improvement over the Silver Ghost was the new pushrod-OHV straight-6 engine. Constructed as three groups of two cylinders with detachable heads, the engine was described by Rolls-Royce as producing "sufficient" power. The engine used a 4¼ in (107.9 mm) bore and undersquare 5½ in (139.7 mm) stroke for a total of 7.7 L (7,668 cc (467.9 cu in)) of displacement. In 1928, the cylinder heads were upgraded from cast iron to aluminium; this caused corrosion problems. The separate gearbox connected through a rubberised fabric flexible coupling to the clutch and through a torque tube enclosed drive to the differential at rear, as in the Silver Ghost.

Differences between US and UK versions

Like the Silver Ghost, the Phantom was constructed both at Rolls-Royces' Derby factory in the United Kingdom and at a factory in Springfield, Massachusetts in the United States. The US factory produced Phantom Is from 1926 to 1931.

Most UK Phantom I's retained the fuel gauge at the tank, but some US models had one on the dash. The UK Phantom retained oil lubrication through Enots nipples, some times as many as 50, which attached to a special Enots oil pressure gun and needed to be attended to regularly at 500, 1000 and 2000 mile intervals, involving much time and effort. The US Phantom used a Bijur centralized oiling system which connected all the oiling points and oiled them with a stroke of a single pump.

Only the chassis and mechanical parts were made by Rolls-Royce. The body was made and fitted by a coachbuilder selected by the owner. Coachbuilders who produced bodies for Phantom I cars included Barker, Park Ward, Thrupp & Maberly, Mulliner and Hooper. American Phantoms could be bought with standardized bodies from Brewster & Co., which was owned by Rolls-Royce.