The Silver Cloud III arrived in 1963. External dimensions were slightly tweaked, the interior remodelled, the weight reduced by a little over 100 kg (220 lb) and improvements made to the engine which included fitting 2-inch (51 mm) SU carburettors in place of the 1¾ inch units used on the Series II Silver Cloud. The compression ratio was increased to 9:1, reflecting the higher octane levels of premium fuel in major markets, although the option of a lower 8:1 compression ratio was still offered in markets where non-availability of higher octane fuels might be an issue. Rolls-Royce, as before, refused to disclose overall engine power output, but indicated that there had been an improvement of "perhaps 7%".Increased power and weight reduction boosted speed and performance slightly. The engine now included a nitride hardened crankshaft to reflect the extra power being generated and in response to reports of broken crankshafts in the earlier V8 Silver Clouds. The transmission was a GM Hydramatic which Rolls-Royce used under licence.

The headlights were grouped in a four-headlamp layout subsequently continued in the later Silver Shadow. Other external changes included a slightly increased slope of the hood / bonnet to correspond with a 1 1⁄2 inches (3.8 cm) reduction in the height of the radiator grille.

Between 1963 and 1966 there were no major changes. Stainless steel wheel trims replaced chrome-plated ones in April 1963, and an improved rear window demister was introduced in November of the same year. Wider front seats were fitted in January 1964, and five months later a revised headlamp surround now incorporated a very small RR monogram. A chrome badge reading "Silver Cloud III" in an italic font can be seen on the right bottom side of the boot of most UK and European delivered examples, whilst US versions were delivered without this badge.

As with earlier models, Rolls-Royce continued to make the Silver Cloud chassis available to traditional coachbuilders. A notable version is the so-called "Chinese Eye" design, offered in Fixed Head and Drop Head Coupe style by Mulliner Park Ward. It was derived from the earlier H. J. Mulliner & Co. design for the Bentley S1 and S2 Continentals. To widen production in a diminishing market, this adaptation was made available for the Bentley S3 Continental as well as for the Silver Cloud III so, of the 328 coach-built Silver Cloud III, about 100 were of this style. 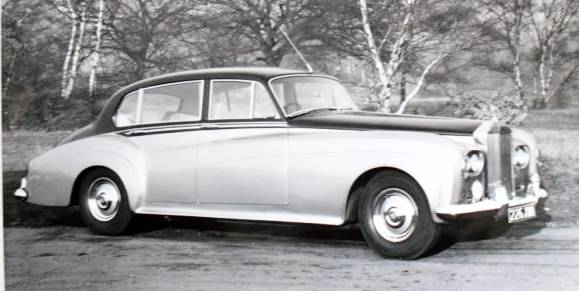