The Rolls-Royce Silver Shadow is a luxury car that was produced in Great Britain in various forms from 1965 to 1980. It was the first Rolls-Royce to use a monocoque chassis, a response to concerns that the company was falling behind in automotive innovation.

To date, the Silver Shadow has the largest production volume of any Rolls-Royce.

Following in the manufacturer's tradition of building luxury vehicles, the standard wheelbase Silver Shadow measured 224 inches (5,700 mm), 4,700 lb (2,100 kg) and had a book price of £6,557in the first year of production. 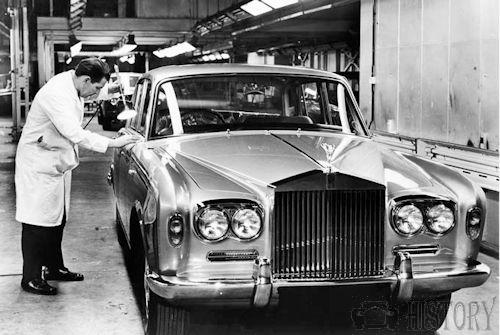 Initially, the model was planned to be called "Silver Mist", a natural progression from its predecessor Silver Cloud. The name was changed to "Silver Shadow" after realizing that "mist" is the German word for manure, rubbish, or dirt.

The design was a major departure from its predecessor, the Silver Cloud; although several styling cues from the Silver Cloud were modified and preserved, as the automobile had sold well. The John Polwhele Blatchley design was the firm's first single bow model. More than 50% of its predecessor had been sold on the domestic market where, by the standards of much of Europe and most of North America, roads were narrow and crowded.The original Shadow was 3 1⁄2 inches (8.9 cm) narrower and 7 inches (18 cm) shorter than the car it replaced, but nevertheless managed to offer increased passenger and luggage space thanks to more efficient packaging made possible by unitary ("monocoque") construction.

Aside from a more modern appearance and construction, the Silver Shadow introduced many new features such as disc rather than drum brakes, and independent rear suspension, rather than the outdated live axle design of previous cars.

The car's most innovative feature was a high-pressure hydraulic system licensed from Citroën, with dual-circuit braking and hydraulic self-levelling suspension. At first, both the front and rear of the car were controlled by the leveling system; the front levelling was deleted in 1969 as it had been determined that the rear levelling did almost all the work. Rolls-Royce achieved a high degree of ride quality with this arrangement.

In 1977, the model was renamed the Silver Shadow II in recognition of several major changes, most notably rack and pinion steering; modifications to the front suspension improved handling markedly.

Externally, the bumpers were changed from chrome to alloy and rubber starting with the late 1976 Shadows. These new energy absorbing bumpers had been used in the United States since 1974, as a response to tightening safety standards there. Nonetheless, the bumpers on cars sold outside of North America were still solidly mounted and protruded 2 in (5 cm) less. Also now made standard across the board was the deletion of the small grilles mounted beneath the headlamps. Outside of North America, where tall kerbs and the like demanded more ground clearance, a front skirt was also fitted to the Silver Shadow II and its sister cars. In 1979 a limited number of Silver Shadow II cars were made to commemorate the 75th anniversary of the company and were fitted with red "RR" badges.

A long-wheelbase variant, some 4 inches longer to provide additional rear seat legroom, was offered in the USA from May 1969, and available to domestic customers from early 1970.A pilot series of ten long wheelbase cars had been built in 1967 and sold, one of them to Princess Margaret. Some long-wheelbase models were fitted with a privacy glass divider and are now highly sought-after by collectors. Outside of North America, the cars with a divider were fitted with a separate air conditioning unit mounted in the trunk - North American safety laws made this impossible, as the petrol tank would have had to be relocated. The cars with a divider lost the entire gain in wheelbase but made up for it with better privacy. The glass divider was retractable.

Initially, the long-wheelbase model did not have a separate name, but in 1977, with the introduction of the Silver Shadow II, the longer car was dubbed the Silver Wraith II.

The Wraith II is identified by all of alterations found on the Silver Shadow II and additionally an Everflex covered roof (also available as an option on the Silver Shadow II), a smaller rear opera-style window (some customers deleted the smaller back window: for example Joe Bamford of JCB) and different wheel covers. Some Silver Wraith IIs were also fitted with electric divisions which took up the extra four inches of leg room in the rear. Vehicles fitted with the division are now considered highly desirable

A two-door fixed-head coupe or FHC model was introduced early in 1966, followed by a convertible in 1967. There are two different versions for the coupé version, the Mulliner Park Ward and the very rare James Young version which was only built in fifty examples - 35 Rolls-Royces and 15 Bentleys. The James Young version was discontinued in 1967, leaving only the curvier Mulliner Park Ward model. In 1971 these cars were given the separate identity of Corniche (still either with Rolls-Royce or Bentley labelling), and eventually went on to outlive the Shadow by some distance with production lasting until 1982 for the coupé and 1996 for the convertible.

Another coupé variant on the Shadow platform was the Camargue, with bodywork designed by the Italian firm Pininfarina, and production running from 1975 to 1986. The Camargue had the distinction of being the most expensive Rolls-Royce, with a base price even higher than the hand-built Phantom VI limousine.

A Bentley version of the Shadow, known as the Bentley T (and Bentley T II from 1977), was also made. It was mechanically identical and differed only in the badging and design of the radiator shell. The more rounded radiator also required a slightly reshaped bonnet profile. Other modifications were only slight cosmetic ones, a different front bumper and hubcaps. Engine valve covers with a "Bentley" logo were only used when the factory had them available.

The long-wheelbase version of the Bentley T did not have a separate identity and was simply called T long-wheelbase or T2 long-wheelbase. Only a very few of these were built (9 and 10 examples respectively, less than 0.4% of the total long-wheelbase production) as most limousine buyers had a preference for the more prestigious Rolls-Royce brand.

All two-door cars were also available as Bentleys. However, only one example of a Bentley Camargue was ever produced.

Rolls-Royce considered offering a Phantom VII model, based on the Silver Shadow, but production of the car was not pursued and no prototypes were built.

The Rolls-Royce factory built a special stretch limousine in 1979. It was ordered by Bhagwan Shree Rajneesh. The religious leader had a collection of over 100 Rolls-Royce cars. 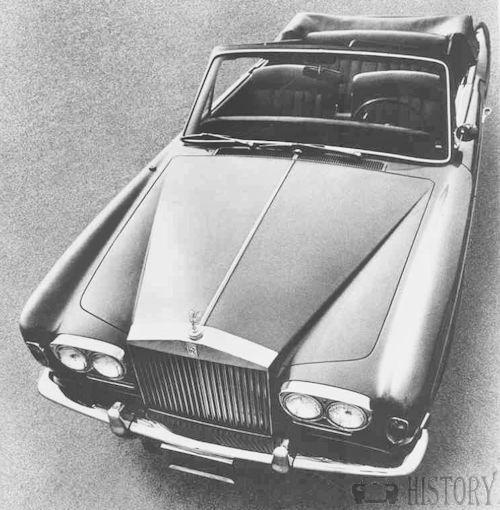