The Riley 4/68 and 4/72 are cars produced by BMC from 1959 through the 1960s. They are related to the Pinin Farina-designed Austin A55 Cambridge, MG Magnette Mk. III, Morris Oxford V, and Wolseley 15/60, sharing the MG's rear styling and engine (with a milder cam).

Launched in April 1959, the 4/Sixty-Eight was the last of the five B series BMC Pininfarina cars to be released. The Riley used the twin-carburettor B-Series straight-4 engine in the form already familiar to drivers of the MG Magnette III, producing 64 bhp (48 kW). This was 6 hp (4.5 kW) more than the similar Wolseley 15/60.

From the outside the car was distinguished from its siblings by a Riley grille on the front and (apart from the MG with which it shared its tail treatment) slightly less acute tail fins at the back. Inside the facia was relatively well equipped: this was the only one of the five cars to come with a rev counter as standard equipment. 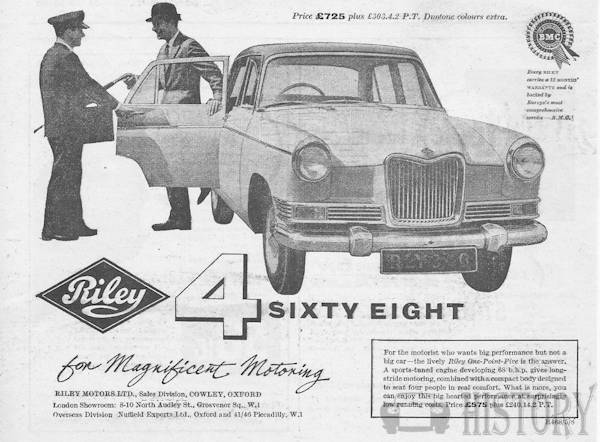