The Renault Florida is a two-door coupe or convertible car manufactured by the Renault manufacturer from 1958 and designed by Pietro Frua . Derived from the Dauphine , Florida has the rear engine and the underbody.The Caravelle is distinguished from Florida by its raised roof.

In 1957 a project Dauphine GT Italian coachbuilder Ghia . At the 1965 Geneva Motor Show, Pietro Frua , a dissenting designer from the Ghia Coachwork, presents a Coupé model similar to the Renault project.The Régie takes over the project and unveils at the Paris Salon in September 1958 the Florida / Caravelle.Florida, or Caravelle for the American market, is based on the Dauphine and takes the platform as the mechanics. Only the body is new, elegant as an Italian with fluid and taut lines and a neat finish.But after the American debacle of the Dauphine, the future of the Caravel across the Atlantic quickly becomes very dark. The dreaded catastrophe is coming and the adventure is running out. The Dauphine are all reimported in France and the few Caravelle who have crossed the ocean come back instantly.

It is in France that the Régie Renault will sell all of its production, 117,000 copies in 10 years. After this failure, Renault did not propose a new Coupé until 1971 with the R15 / 17 tandem, which had no better success.

The front with round indicators has in its center the crown already seen on the Dauphine. The 845 cm 3 engine  is the  Ventoux special of the Dauphine Gordini . The gearbox is three-speed with four-speed optional. The brakes are front and rear drums , full sail wheels and electricity is in 6 volts.The market North American being especially targeted, Florida is exported with some modifications as the "Caravelle" for the sensibilities of the other States of the Union . 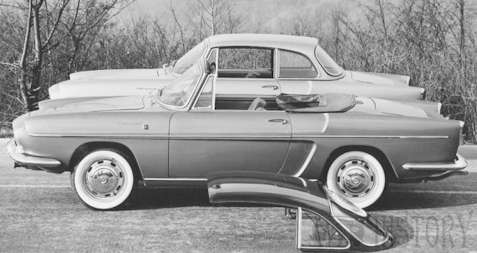 From 1962 and until 1963 , the Florida offers big changes: new engine 956  cm  to five levels of 48  hp with the f Sierra engine  more known under the name  Cléon-Fonte  developed by the engineer René Vuaillat , which will be manufactured in the Renault factory of Cléon,with four disc brakes fully synchronized three-speed gearbox, electricity in 12 volts, closing side vents and appearance of bonnet punctures on the back because the radiator is now placed behind the engine. The direction of rotation of the Ventoux engine  is anti-clockwise (distribution side), while the  Sierra engine  rotates clockwise, to obtain the same direction of rotation to the wheels, the differential of the gearbox is returned on versions with the Sierra engine.The convertible retains the optional hard top of Florida, the coupe, which takes the name of Caravelle, presents a new design of the pavilion to accommodate four people.

Caravelle 1100 Coupé and Convertible and "S"

The Caravelle 1100 is distinguished by the inscription Caravelle on the front. The dashboard is trimmed in faux leather, the rear window of the hood is wider and new colors appear. The hard top now resumes the design of the Caravelle coupe of the previous series.Engine 1108 cm  with 55  hp from the Estafette , carburetor Solex with starter automatic transmission and four fully synchronized expansion tank reports brass located in the right rear fender.From the 1966 models , the engine increases to 57.5  hp thanks to a double-body Weber carburetor . The dashboard includes round dials with a tachometer . The expansion tank is made of glass next to the radiator. On the back cover, the abbreviation 1100 disappears in favor of a Renault monogram. For 1967 , Renault diamond on the front mask and rectangular front turn signals.