The Renault Captur is a crossover produced by the French car manufacturer Renault from 2013 to 2019. It is replaced by a second generation in October 2019. It is also sold by Renault Samsung Motors under the name of QM3 .

A concept car named Renault Captur was unveiled by Renault at the 2011 Geneva Motor Show . He was then shown by Renault Samsung Motors at the Motor Show 2012 in Busan

The official version of the Renault Captur was unveiled by Renault on January 11 , 2013. After the mixed success of the Modus , its predecessor in the compact MPV 7 segment , the Captur mini crossover is more versatile and attractive to have "the driving position of an SUV, the livability and modularity of a minivan and finally the maneuverability and driving pleasure of a compact sedan  "

It clearly takes the new Renault signature with this big logo imposing on the front, which is also found on the Renault Clio IV . It also takes the motorization and the chassis.

the restylée Captur is unveiled at the Geneva International Motor Show 2017  : to support its features on those of Kaptur, the shields adopt hook-shaped LED lights, the headlights and taillights are surrounded by a new light signature. Since November 6 , 2017, the model is sold in India  .

The Renault Captur gets the best rating (5 stars) for the EuroNCAP  crash test .

In 2013, three types of finishes were available: Business, Zen and Intens

In 2017 is launched the special series "Cool Gray" and a limited edition named Iridium .

In 2019, before being replaced by the second generation , Renault offers the limited edition Captur Sunset. .

On some finishes, the R-Link module is a touch pad that allows access to various functions (multimedia, Tomtom navigation , car radio settings, services,  etc. The Rlink system has encountered reliability that would have been solved in 2015  .

Renault plans to produce a sports RS version of the Captur . Originally planned for 2014 , then for 2016 , but in October 2016 the decision to commercialize this model is still not made

In 2019 Renault presents a prototype 1.6 Turbo 220 hp Captur RS-Hybrid-Rechargeable whose commercialization is planned for 2021  .

On March 30, 2016, Renault presents a vehicle called Kaptur (with a K) different from the European Captur. To meet the need to offer a 4x4 vehicle in Russia, this model resembling the Captur is based on the chassis of the Renault Duster , sold in this country. Renault has always stated that, for reasons of cost and the fact that the vast majority of uses do not require it, the chassis of the Captur had not been developed to propose a version 4x4 from where the choice of the Duster base for Kaptur  .

Renault Kaptur is also produced in Brazil since 2017, as the Captur although this is the meme model that Kaptur sold in Russia . 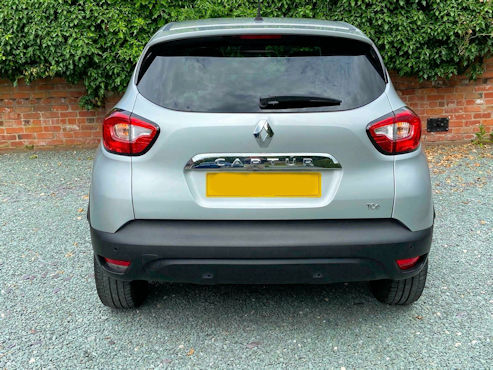