The Renault 6 is a car manufactured by Renault in Île Seguin in Boulogne - Billancourt ( Hauts - de - Seine ) and presented at the Paris Motor Show in September 1968 . The Renault 6 was so named because it was equipped with a six-horsepower tax engine.

This small front-wheel-drive sedan offers a fairly spacious bodywork powered by a small engine. It has a tailgate , a foldable and easily removable rear seat and a dashboard gear lever. It takes all the mechanical elements of the Renault 4 (suspension by torsion bars and gearbox in front of the engine) and adds refinements like the wider windshield , but does not keep the vents that allowed the R4 to get a ventilation of the vehicle by depression.

For Renault, it was planned to be a small Renault 16 , hence its similar line with the exception of the side edges of the roof. However, mechanically, the R6 is much closer to the R4 than the R16. The R6 is an evolution of the R4 which it takes the essential in distinguishing itself by the aesthetics and habitability. In this sense, the R6 is at R4 what the Dyane is at the Citroën 2 CV , or what the R10 is at the R8.

From October 1970 (model 1971), the original version is supplanted by the new R6 TL. Thanks to its 6 HP engine, the car is more comfortable on the road with a maximum speed that goes from 120 km / h to 135 km / h.In Spain, the Fasa-Renault 6 has from the beginning a "  Cléon-Fonte engine  " of 956  cm 3 .The direction of rotation of the "  Billancourt engine  " is anti-clockwise (distribution side), while the "  Cléon-Fonte engine  " rotates clockwise, to obtain the same direction of rotation to the wheels, the differential of the gearbox is back on the versions with the "Cleon-Cast Iron Engine".

The mechanics of the R6 is relatively reliable and economical. Its conservation problem is related to the corrosion that compromises the integrity of the different parts of the bodywork: tip of the front fenders, turn of the windshield , rear wheel arches ...The R6 has seduced the customer more by its practical side than by its aesthetics, it has never aroused admiration and lust and is just starting to find a place on the market of vintage cars. 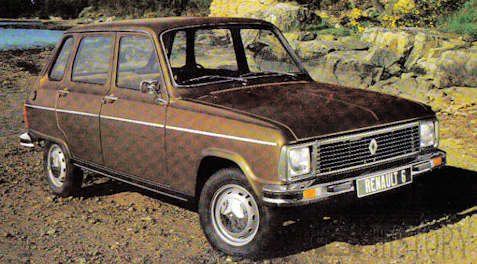