The fourth-generation Mégane was launched at the September 2015 Frankfurt Motor Show, with sales starting in July 2016. It uses the CMF-CD platform developed by Renault and Nissan. The Mégane IV follows the latest design language, which has been seen on the ClioIV, Captur, Espace V and Talisman.  An estate version (Mégane Sport Tourer) was revealed at the 2016 Geneva Motor Show. A saloon version (Mégane Sedan) was revealed later in July of the same year.

The fourth-generation Mégane is larger and lower than its predecessor. The suspension is made of McPherson struts on the front and a torsion beam on the rear. Brakes are discs on both axles. The driver can select between five driving modes that change the car set-up. Most Megane's models have a head-up display and a 7-inch screen (replaced with a 8.7-inch touchscreen in some trim levels). Optionals include adaptive cruise control, automated emergency braking, lane departure warning, speed limit warning, blind spot monitoring, automatic headlights, reversing camera, parking sensors and a hands-free parking system. Renault put focus on quality during development. Speaking about the car, Renault's chief designer Laurens van den Acker said "Renault can produce cars with a Latin skin and a German heart". It has nine engines available (four petrol and five diesel) with power outputs between 89 hp (65 kW) and 202 hp (149 kW). 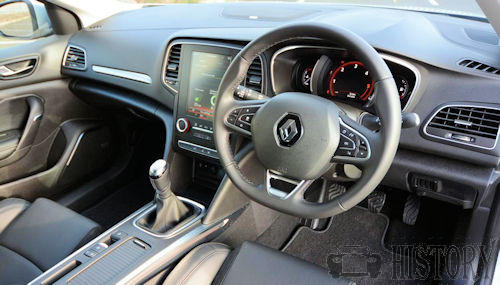 The Mégane GT is a high-performance version with 1.6-litre diesel and petrol power trains. As standard, it incorporates a four-wheel steering system (4Control) and dual-clutch automatic gearbox with optional paddle shifting. It also has a slightly different design for the interior and the exterior.

The Renault Mégane Sedan, launched in July 2016, resembles the Talisman, but with the front section of the Mégane IV hatchback. It has more space for the back seat passengers than the hatchback and a larger boot/trunk, with a theoretical volume of 508 decimetres. It will be sold on the African continent, the United Arab Emirates and various east Asian markets. Within Europe it will be offered in several countries including Turkey, Italy, Poland and Romania, but not in France. Depending on the market, there are two petrol engines and 3 diesel engines offered, with power outputs ranging from 90 to 130 bhp. Only the mid range engine is suitable to be matched with the dual clutch six speed transmission.

The electric version of the Mégane saloon that Renault is building will come with a lifetime warranty, and payment will follow the model established by the mobile-phone industry. After buying the car, owners will subscribe to a battery-replacement and charging plan based on their anticipated mileage. Recharging was to be done at one of 500,000 spots that Project Better Place was to build and maintain; however, a new alternative will need to be sought due to the filing of bankruptcy on 26 May 2013 by Project Better Place.