The Renault 5 Turbo or R5 Turbo is a high-performance hatchback automobile launched by the Frenchmanufacturer Renault at the Brussels Motor Show in January 1980. The car was primarily designed for rallying, but was also sold in a street version. A total of 3576 R5 Turbos were manufactured during a four-year production run.

In response to Lancia's rallying success with the mid-engined Stratos, Renault's Jean Terramorsi, vice-president of production, asked Bertone’s Marc Deschamps to design a new sports version of the Renault 5 Alpine supermini. The distinctive new rear bodywork was styled by Marcello Gandini at Bertone.

Although the standard Renault 5 has a front-mounted engine, the 5 Turbo featured a mid-mounted 1397 cc Cléon-Fonte turbocharged engine placed behind the driver in mid-body in a modified Renault 5 chassis. In standard form, the engine developed 160 metric horsepower (118 kilowatts; 158 horsepower) and 163 lb·ft (221 N·m) torque.

Though it used a modified body from a standard Renault 5, and was badged a Renault 5, the mechanicals were radically different, the most obvious difference being rear-wheel drive and rear-mid-engined instead of the normal version's front-wheel drive and front-mounted engine. At the time of its launch it was the most powerful production French car. The first 400 production 5 Turbos were made to comply with Group 4homologation to allow the car to compete in international rallies, and were manufactured at the Alpine factory in Dieppe.

Once the homologation models were produced, a second version named Turbo 2 was introduced using more stock Renault 5 parts replacing many of light alloy components in the original 5 Turbo version. The Turbo 2 was less expensive, but had nearly the same levels of performance, top speed of 200 km/h (120 mph) and 0–100 km/h in 6.9 seconds To differentiate it from the Turbo 2, the original 5 Turbo is often referred to retronomously as "Turbo 1".

The concept of a mid-engined small Renault returned with the 1998 announcement of the Renault Clio V6. 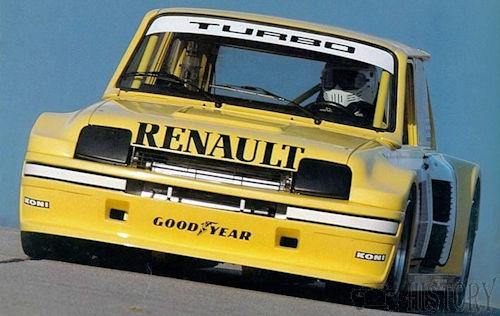 Driven by Jean Ragnotti in 1981, the 5 Turbo won the Monte Carlo Rally on its first outing in the World Rally Championship. The 2WD R5 turbo soon faced the competition of new Group B four-wheel drive cars that proved faster on dirt.

In 2004, Sports Car International named the R5 Turbo number nine on the list of Top Sports Cars of the 1980s. 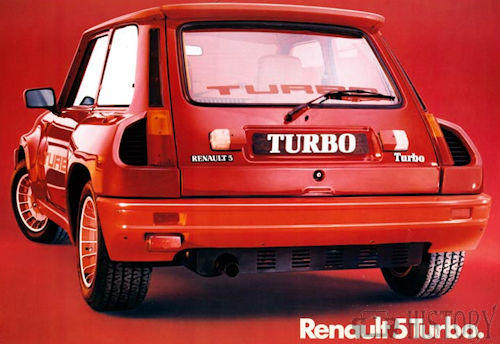