The second generation Renault 5, often referred to as the Supercinq (or "Superfive"), appeared in the autumn of 1984 (RHD models from early 1985). Its launch came within 18 months of Ford, General Motors, Peugeot, Fiat and Nissan all launching new competitors in the supermini sector.

Although the bodyshell and chassis were completely new (the platform was based on that of the larger Renault 9 and 11), familiar 5 styling trademarks were retained; styling was the work of Marcello Gandini. The new body was wider and longer featuring 20 percent more glass area and more interior space, with a lower drag coefficient (0.35), as well as 57.4 mpg-US (4.10 L/100 km; 68.9 mpg-imp) at 90 kilometres per hour (56 mph) in the economy models. The biggest change was the adoption of a transversely-mounted powertrain taken directly from the 9 and 11, plus a less sophisticated suspension design, which used MacPherson struts.

Renault decided to use the naturally aspirated 1.7 L from the Renault 9/11, which utilized multipoint fuel injection, in addition to the sports orientated 1.4 L turbo. Under the name GTE, it produced 95 PS (70 kW; 94 hp). Although not as fast as the turbo model, it featured the same interior and exterior appearance, as well as identical suspension and brakes. The Baccara and GTX versions also used the 1.7 engine - the former sporting a full leather interior, power steering, electric windows, sunroof, high specification audio equipment and as extras air-conditioning and On-Board Computer. The latter was effectively the same but the leather interior was an option and there were other detail changes. As with the previous generation, the 5 Turbo was again assembled at the Alpine plant in Dieppe, where forty cars per day were constructed in 1985.

The model was starting to show its age by 1990, when it was effectively replaced by the Clio, which was a sales success across Europe. Production of the R5 was transferred to the Revoz factory in Slovenia when the Clio was launched. It remained on sale with only 1.1 L, 1.4 L petrol and 1.6 L naturally aspirated diesel engines, as a minimally equipped budget choice called the Campus. until the car's production run finally came to an end in 1996. The R5 GT Turbo was discontinued in 1991, when the 16-valve Clio was launched.

The Campus sold more strongly in the United Kingdom than elsewhere, because the Renault Twingo that addressed the same market, was only sold in LHD form and only in mainland Europe. In 2011, it was recommended as one of Britain's Best Bangers, by Car Mechanics Magazine because of the number of cheap, low mileage, full service history, examples available.The Campus name was revived in 2005 with the Renault Clio II. 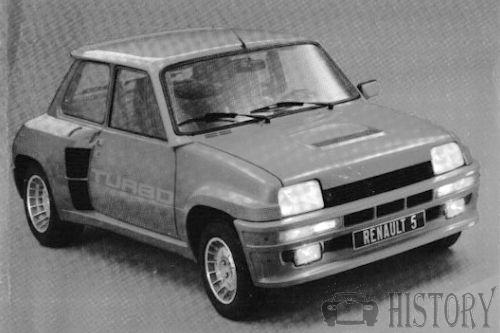 A "hot hatch" version, the GT Turbo, was introduced in 1985. It used a modified four cylinder, eight-valve Cléon 1,397 cc engine, a pushrod unit dating back to the 1962 original (in 1,108 cc form). It was turbocharged with an air-cooled Garrett T2 turbocharger. Weighing a mere 850 kg (1,874 lb), and producing 115 PS (85 kW; 113 hp), the GT Turbo had an excellent power-to-weight ratio, permitting it to accelerate from a standstill to 60 mph (97 km/h) in 7.5 seconds. To differentiate it from the standard 5, it came with blocky plastic side skirts. Unfortunately, turbo lag was an issue, along with poor hot starting, and was considered rather difficult to control. The same engine was used, with similar issues, in the Renault 9 and 11 Turbos.

In 1987, the facelifted Phase II was launched. Major changes in the Phase II version included installing watercooling to the turbocharger, aiding the Phase I's oil-cooled setup, which extended the life of the turbo. It also received a new ignition system which permitted it to rev 500 rpm higher. These changes boosted engine output up to over 120 PS (88 kW; 118 hp). Externally, the car was revamped, with changes (including new bumpers and arches) that reduced the car's drag coefficient from 0.36 to 0.35. Giving the Phase II a 0–100 km/h time of 7.5 secs. In 1989 the GT Turbo received a new interior, and in 1990 the special edition Raider model (available only in metallic blue, with different interior and wheels) was launched. In late 1991 the Renault 5 GT Turbo was discontinued, superseded by the Clio 16v and the Clio Williams.

The Renault 5 GT Turbo's 1989 victory in the 1989 Rallye Côte d'Ivoire remains the only overall WRC victory for a Group N car.

The Renault Express, a panel van version of the second generation Renault 5

The second-generation R5 also spawned a panel van version, known as the Renault Express. It was commercialized in some European countries as the Renault Extra (UK and Ireland) or Renault Rapid (mainly German speaking countries). This car was intended to replace the R4 F6 panel van, production of which had ceased in 1986. From 1996 to 2002 the Express was produced for South America at Nordex in Uruguay.

In 1989, the Belgian company EBS produced convertible versions of the Renault 5 (1,400 in total), almost all of which were left-hand drive. A total of 14 of the 1,400 cars produced were based on the right-hand drive GT Turbo Phase II. 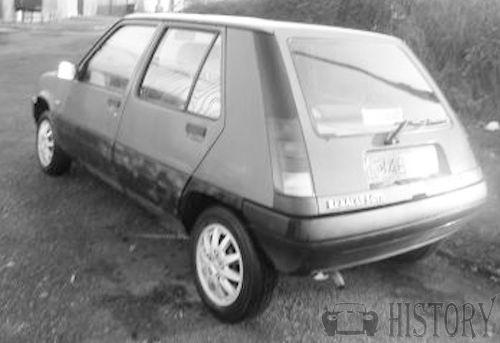