Images and details of the Renault 5 were published on 10 December 1971, the car's formal launch following on 28 January 1972.

The Renault 5 was styled by Michel Boué who designed the car in his spare time, outside of his normal duties. When Renault executives learned of Boué's work, they were so impressed by his concept they immediately authorized a formal development programme. The R5 featured a steeply sloping rear hatchbackand front dashboard. Boué had wanted the tail-lights to go all the way up from the bumper into the C-pillar, in the fashion of the much later Fiat Punto and Volvo 850 estate / wagon, but the lights remained at a more conventional level. The 5 narrowly missed out on the 1973 European Car of the Year award, which was instead given to the Audi 80.

Boué died of cancer in 1971, just months before the car he designed was launched.

The R5 borrowed mechanicals from the similarly popular Renault 4, using a longitudinally-mounted engine driving the front wheels with torsion bar suspension. OHV engines were borrowed from the Renault 4 and larger Renault 8: there was a choice, at launch, between 782 cc and 956 cc according to price level. A "5TS/5LS" with the 1,289 cc engine from the Renault 12 was added from April 1974. As on the Renault 4, entry level Renault 5s had their engine sizes increased to 845 cc in 1976 and at the top of the range later models had the engine sizes expanded to 1,397 cc.

It was one of the first modern superminis, which capitalised on the new hatchback design, developed by Renault in the mid 1960s on its larger R16. It was launched a year after the booted version of the Fiat 127, and during the same year that the 127 became available with a hatchback. Within five years, a number of rival manufacturers - namely Ford, General Motors and Volkswagen - had launched a similar car.

Although the mechanical components came from earlier models, body construction involved floor sections welded together with the other body panels, resulting in a monocoque structure.

The approach had by then become mainstream among many European automakers, but represented an advance on the mechanically similar Renault 4 and Renault 6 both of which used a separate platform. The monocoque structure reduced the car's weight, but required investment in new production processes.

The GTL version, added in 1976, featured a 1,289cc engine tuned for economy rather than performance. The 5 GTL was distinguished from earlier versions by thick polyester protection panels along the sides. 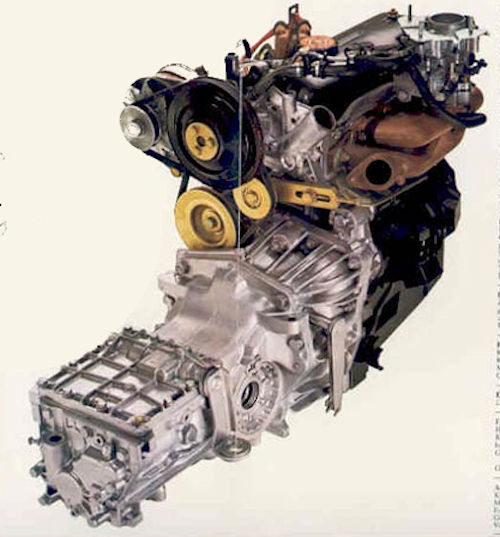 The Renault 5 was targeted at cost conscious customers, and the entry level "L" version came with the same 782 cc power plant as the cheaper Renault 4 and drum brakes on all four wheels. In 1972 it was priced in France at below 10,000 francs. However, for many export markets the entry level version was excluded from the range and front wheel disc brakes were offered on the more powerful 956 cc "Renault 5TL" along with such attractions under the bonnet/hood and an alternator, and in the cabin reclining back rests for the front seats.From outside the "TL" was differentiated from the "L" by a thin chrome strip below the doors.

The early production R5 used a dashboard-mounted gearshift, linked by a rod which ran over the top of the engine to a single bend where the rod turned downwards and linked into the gearbox, which was positioned directly in front of the engine. A floor-mounted lever employing a cable linkage replaced this arrangement in 1973. An automatic version, with the larger 1,289 cc engine, was added in early 1978. At the time, the automatic usually represented just under five percent of overall Renault 5 production Door handles were formed by a cut-out in the door panel and B-pillar. The R5 was one of the first cars produced with plastic (polyester and glass fibre) bumpers, which came from a specialist Renault factory at Dreux.These covered a larger area of potential contact than conventional car bumpers of the time and survived low speed parking shunts without permanently distorting. This helped the car gain a reputation as an "outstanding city car", and bumpers of this type subsequently became an industry standard.

The R5's engine was set well back in the engine bay, behind the gearbox, allowing the stowage of the spare wheel under the bonnet/hood, an arrangement that freed more space for passengers and luggage within the cabin. The passenger compartment "is remarkably spacious" in comparison to other modern, small European cars. The Renault 5 body's drag coefficient was only 0.37 (with most European cars going up to 0.45).

Other versions of the first generation included the four-door saloon version called the Renault 7 and built by FASA-Renault of Spain, where virtually all examples were sold. A five-door R5 was added to the range in 1979, making it one of the first cars of its size to feature four passenger doors. The three-speed Automatic, which received equipment similar to the R5 GTL but with a 1,289 cc (55 bhp) engine, a vinyl roof, and the TS' front seats, also became available with five-door bodywork. In March 1981 the automatic received a somewhat more powerful 1.4 litre engine, which paradoxically increased both performance and fuel economy at all speeds. 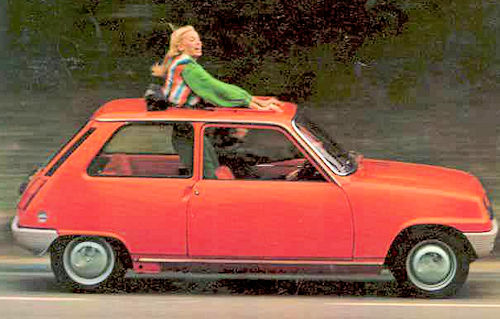 The Renault 5 Alpine was one of the first hot-hatches, launched in 1976 - going on sale around the same time as the original Volkswagen Golf GTI. In the UK, the car was sold as the Renault 5 Gordini because Chrysler Europe already had the rights to the name "Alpine" in the UK and it had just been introduced on the Chrysler Alpine (UK version of Simca 1307) at the time. Use of the name Gordini was from Amédée Gordini, who was a French tuner with strong links with Renault and previous sporting models such as the Renault 8. This (and the later Alpine Turbo models) were assembled at Alpine's Dieppe plant, beginning in 1975.

The 1.4 L (1397 cc) OHV engine, mated to a five-speed gearbox, was based on the Renault "Sierra" pushrod engine, but having a crossflow cylinder head with hemispherical combustion chambers and developed 93 PS (68 kW; 92 hp), twice as much as a standard 1.1 L (1108 cc) Renault 5. The larger engine and its various performance parts meant that the spare tire could no longer fit there and was relocated to the boot.The Alpine could be identified by special alloy wheels and front fog lights and was equipped with stiffened suspension, but still retaining the torsion bar all round. The UK car magazine Motor road test figures quoted top speed of 104.7 mph (168.5 km/h) and 0-60 mph in 9.7 seconds.

The Renault 5 Alpine Turbo was launched in 1982 as an upgraded successor to the naturally aspirated Alpine. In Britain, the car was still called Gordini rather than Alpine. Motor magazine undertook a road test of the Turbo in 1982 and while they appreciated the performance (top speed 179.9 km/h (111.8 mph), 0 to 97 kilometres per hour (0 to 60 mph) in 8.7 seconds), they were critical of its high price as it was £2 more than the larger Ford Escort XR3.

The Renault 5 Turbo should not be confused with the Alpine Turbo or GT Turbo as it was radically modified by mounting a turbocharged engine behind the driver in what is normally the passenger compartment, creating a mid-engined hot hatch and rally car. It was also driven by the rear wheels rather than the front wheels. The Renault 5 Turbo was made in many guises, eventually culminating with the Renault 5 Maxi Turbo. 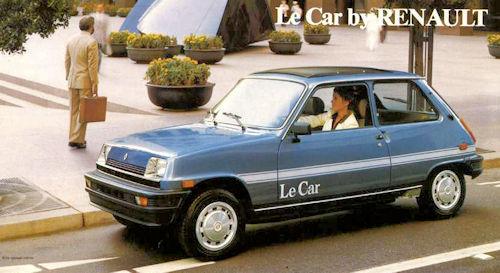 The North American Renault 5 debuted in 1976 as the Le Car. American Motors Corporation (AMC) marketed it through its 1300 dealers where it competed in the United States against such front-wheel-drive subcompacts as the Honda Civicand Volkswagen Rabbit. It was described as a "French Rabbit" that "is low on style, but high on personality and practicality".

AMC's ad agency launched the car in the U.S. with a marketing campaign emphasizing that it was Europe's best selling automobile with millions of satisfied owners. It did not achieve such immediate success in the United States market even though the Le Car was praised in road tests comparing "super-economy" cars for its interior room and smooth ride, with an economical [35 mpg-US (6.7 L/100 km; 42 mpg-imp) highway and 28 mpg-US (8.4 L/100 km; 34 mpg-imp) city] as well as smooth-running engine.

The U.S. version featured a desmogged 1397 cc inline-four engine with a power of 55 hp (41 kW). In 1977 it dominated the Sports Car Club of America "Showroom Stock Class C" class. Ever tightening emissions legislation meant that power was down to 51 hp (38 kW) by 1980.

The Le Car was offered in three-door hatchback form only from 1976 until 1980. For the 1980 model year, the front end was updated to include a redesigned bumper and grille, as well as rectangular headlights. A five-door hatchback body style was added in the 1981 model year. Imports continued through 1983, when the car was replaced by the Kenosha, Wisconsin-built, Renault 11-based Renault Alliance. Sales in Canada continued until 1985, when production of the first generation Renault 5 came to an end.

In at least one U.S. municipality, the Le Car was used as a law enforcement vehicle, when the La Conner, Washington police department acquired three of the vehicles for its fleet in the late-1970s. Renault advertised Le Car's versatility in a full page ad featuring its use by the department

For 1978, a rally Group 4 (later Group B) version was introduced. It was named as the Renault 5 Turbo, but being mid-engined and rear wheel drive, this car bore little technical resemblance to the road-going version. Though retaining the shape and general look of the 5, only the door panels were shared with the standard version. Driven by Jean Ragnotti, this car won the 1981 Monte Carlo Rally for its first race. The 2WD R5 turbo soon had to face the competition of new 4WD cars that proved to be faster on dirt; however, it remained among the fastest of its era on tarmac.

The original Renault 5 continued to be produced in Iran by SAIPA, then by Pars Khodro (a SAIPA subsidiary), as the Sepand. In 2002, the Sepand's Renault 5 platform was replaced with that of a Kia Pride, while a modified version of the Renault 5's bodywork was kept.

Assembly in South Africa began in late 1975, in Durban. The car was built in Toyota's local plant and sold through their network. The 5 was only available with one engine, the 1.3-liter unit used in the European R5 TS. Claimed output is 49.29 kW (67.0 PS; 66.1 hp) SAE. There was a base model, with vinyl seats and lap belts only, and the upmarket LS and LSS models. These received fabric interior, side stripes, a vinyl roof, and more sound deadening and other comfort details. The LSS also got a central console and a full length fabric sunroof. Many extras used in Europe, such as a rear window wiper and a tachometer, were not available in South Africa because it would make it impossible to meet local content regulations. Local content was 56% at introduction; this was to be increased steadily as production wore on. 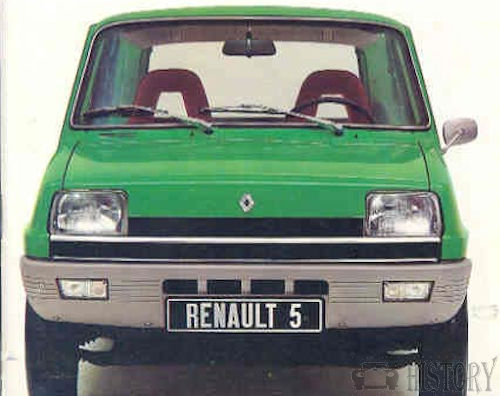