The Renault 9 and Renault 11 are two small family cars produced by the French manufacturer Renault for model years 1981-1988 in saloon (Renault 9) and hatchback (Renault 11) configurations — both were styled by the French automobile designer, Robert Opron.

Variants were manufactured by American Motors Corporation (AMC), as the Renault Alliance and Renault Encore for the North American market — as well as for the Colombian market from 1983-1999. The car was produced in Turkey until 2000.

The models use a transverse front-wheel drive engine configuration and feature four-wheel independent suspension. They were chosen the European Car of the Year for 1982, as well as the Motor Trend Car of the Year.

The Renault 9 was launched in the autumn of 1981 as a four-door saloon while the 11 arrived in the spring of 1983 as a three or five-door hatchback.

Both had been developed under the Renault code name L42 and were designed by Robert Opron. Renault had begun the conception of the Renault 9 in 1977, as a "four meter" model (referring to its length) to fit between the Renault 5 and the Renault 14. Opron conceived a traditional three-box design to appeal to the traditional customer and avoid the poor reception that had met the Renault 14's styling. Exhaustive consumer clinics suggested buyers rejected innovation, resulting in a non-descript design, albeit of modest elegance. By the time the models entered production, Renault had assigned more than 500 people to the project, logging 14,500,000 hours of study and testing, constructing 44 prototypes, testing 130 engines, and test-driving prototypes more than 2.2 million km.

The Renault 9 was awarded the 1982 European Car of the Year, while the Alliance appeared on Car and Driver's Ten Best list for 1983, and was the 1983 Motor Trend Car of the Year.

Although the 9 and 11 cars had different names and body styles, they were in fact identical under the skin, and were intended to jointly replace the older Renault 14. The 11 was also distinguishable from the 9 by its front end, which featured square twin headlights, which had been introduced on the North American Alliance. The 9 also received this new front end in 1985 and both models were face-lifted for a final time with matching nose and interior upgrades for the 1987 model year.

A version of the 9 was manufactured and marketed by American Motors Corporation (AMC) in the United States as the Renault Alliance and bearing a small AMC badge. With 623,573 examples manufactured for model years 1982-1987, AMC offered the Alliance as a four-door sedan, two-door sedan (with higher rear wheel arches than the 4-door) and as a convertible, beginning in 1984.

The Renault 9 and 11 continued in production until 1988, when it was replaced in Europe by the Renault 19.

At launch, both cars used Renault's ageing C-type overhead valve engines in either 1.1  or 1.4 litre format, and a basic suspension design which won few plaudits for the driving experience. The exceptions were the 9 Turbo and the 11 Turbo hot hatch, which used the turbocharged engine from the Renault 5. The 11 Turbo was introduced first, and originally only with three-door bodywork. Unlike the 5 Turbo or the 205 GTi, the 11 Turbo had a more comfort-oriented focus.Although the cars were heavier than the Renault 5, the increased power in later models was enough to ensure higher performance, thanks to its 115 PS (85 kW; 113 hp). The rally-tuned version was impressively fast, producing about 220 PS (162 kW; 217 hp).

The newer F-type engine which had been developed in collaboration with Volvo appeared from late 1983 on in twin-carburetted 1,721 cc guise (F2N), powering the upmarket GTX, GTE, TXE, and TXE Electronic (Electronique in France) versions. These larger-engined versions were specifically developed with American needs in mind, although they also happened to be well-suited for a changing European market. Later iterations also received fuel injection. The Alliance and Encore, while comparatively underpowered, had a definite advantage in ride and handling against other small cars available in America at the time and even had their own SCCA spec-racing series, the Alliance Cup. 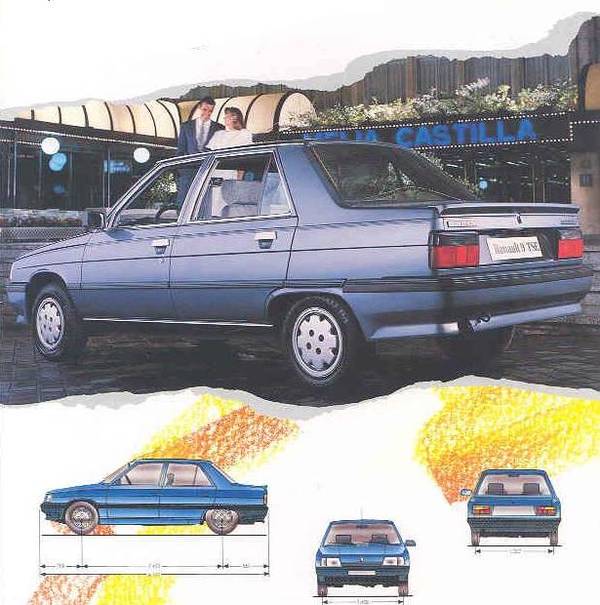 Different versions around the world

The next European face-lifted versions of the Renault 9 in the country were known as the Gama 2. In 1987, the TL (1300 cc) was introduced followed by the more advanced TSE 1.3 and GTX 1.4 in 1988. The latter featured front power windows, a spoiler, and a better interior. The new top-of-the-range TXE was launched in 1989 and introduced updated front lights, power mirrors and the TIR - An infrared remote control to operate the locks. In 1990 SOFASA marketed a 50-vehicle, 50th special edition Prestige with leather seats and alloy rims.

In 1992 these versions ceased production and three models were introduced: The basic Brío (1.3 L), the mid-range Súper (1.3 L) and the Máximo (1.6 L). In 1995 the Brío was renamed Brío RN so it could be differentiated from the more sophisticated Brío RT. A more powerful variant of the RT was called Óptimo.

By mid-1996 SOFASA decided to experiment a much more flexible way to offer cars to the market. Called R9 Personnalité, the idea allowed customers to choose from different engines and accessories so they could assemble the car they wanted within their budget. This was possible through special software in dealerships. A year later, a face-lifted version featured fuel injection, assisted steering, and a completely new interior.

After 16 years of production, the Renault 9 was discontinued in Colombia and was replaced by the Renault 19 and the Renault Mégane. It became the quintessential family car in Colombia, reaching over 115,000 units built and sold between 1983 and 1999, a record in the automotive Colombian history up to that time.

Built by Oyak-Renault in Bursa, the Renault 9 retained the original "Phase 1" bodystyle into the 1990s. A modernized, more ovoid design (phase 4) was released in Turkey in 1997 and was sold there until 2000. From 1996, the 1.4 litre engine (the only size available) received fuel injection in order to meet European emissions standards.

The subcompact-sized automobile was manufactured and marketed in North America by American Motors Corporation (AMC) as the Renault Alliance from model years 1983 to 1987, and with a three- and five-door hatchback variant, the Renault Encore marketed beginning in 1984. For 1987, AMC offered the one-year-only GTA coupé and convertible, which included a 2.0 L engine, sport suspension, aerodynamic body kit, and Ronal wheels.

Production of the Alliance and Encore (renamed the Alliance Hatchback in the 1987 model year) was discontinued after Chrysler's buyout of AMC in 1987. A total of 623,573 units were manufactured.

Renault 11 Taxi Featured in A View to a Kill, Bond commandeers this car and takes it on a pursuit through Paris. During the pursuit the car has its roof chopped off and then later the entire back half of the car is ripped off.