The second generation of the Clio was launched in the spring of 1998 and sold for less than €8,000, with considerably more rounded and bulbous styling than its predecessor. Part of the radical concept of the new Clio were many components made of unusual materials to save in weight and repair costs.For instance, the front wings were made of plastic (Following on from criticisms of corrosion in this part of the previous model and based on technology developed for the Renault Espace) and the material of the bonnet was aluminium in some versions. Originally the engine lineup was similar to before, with 1.2 L, 1.4 L and 1.6 L petrol engines and a 1.9 L diesel.

In early 2000, a sportive 16V version equipped with a new 1.6 L 16-valve engine was introduced, and eventually, all the older petrol engines were upgraded to more powerful and more economical 16-valve versions.

In 2000 a few minor changes were made to the Clio range, which included revised specification levels, a new instrument cluster, and a passenger airbag fitted as standard for all models. The Clio achieved a four-star Euro NCAP rating in 2000 which was class-leading at the time. 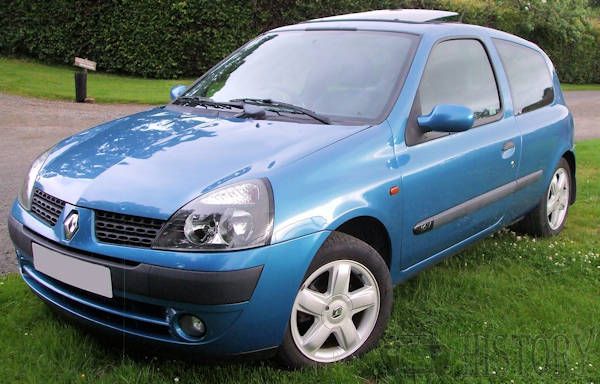 A major facelift occurred in the spring of 2001 which saw the exterior restyled (most visibly the headlights were made more angular), the interior quality improved and a 1.5 L common rail Diesel engine added. In 2004 Phase 3 followed starting on a 53 Plate this was just some small revisions to bring it up to date. The front bumper was changed giving it a wide lower grille and the foglights were bulged out at the side (cars not equipped with foglights remained using the older ph2 bumper), the upper grille was changed and the headlights (which previously had black background) now had grey. The 15" alloy wheels were changed and were now a 15" version of the 172 model on Dynamique and Extreme models. Clear side repeaters were added, as was a colourcoded rear spoiler (again on Dynamique spec cars). In the South American market, the facelifted Clio continued to use the dashboard of the 1998 model and was never updated

On the inside the pattern on the seats was changed for a simpler one, and the dials were changed to do away with the fuel and water temperature needles and now featured a larger screen that included a digital version of these gauges as well as the millage and trip computer. Climate control equipped cars were given a vent in the back of the glove box so it could be climate controlled. Under the bonnet a new 100 PS (74 kW) dCi engine was available (the 1.2 16v also received a new engine developed with Nissan). Rear disks were fitted as standard for the first time on 1.6 16v models and DCi 100 models. The Clio Renault Sport's power was improved to 179 PS (132 kW) (in the UK, the designation RS 182 was adopted, once more using in reflection of DIN-measured horsepower).

At the 2006 Paris International Agricultural Show, Renault exhibited a Hi-Flex Clio II with a 1.6 L 16-valve engine. This vehicle, which addresses the Brazilian market, features Renault-developed flex-fuel technology, with a highly versatile engine that can run on fuel containing a blend of gasoline and ethanol in any proportion (0% to 100% of either).

The Phase 4 Clio II, known as the Clio Campus, was introduced in 2006 and had a restyled rear end, the number plate moving from boot to bumper, and a better specification on all models. A revised front end was released in April 2009.

The last units of the Clio II built in Mexico featured the headlights used on the Nissan Platina, thus becoming the third headlight design to be used in the car. This version lasted a month (January 2010) on sale, before both Clio and Platina being replaced by the Dacia Logan and Sandero. The second generation Clio is still marketed in France as the Clio Campus, or in Slovenia as the Clio Storia.

In October 2012, a new version of the Clio II, called Clio Mío,was introduced at the São Paulo Motor Show, featuring the brand's new corporate design.It is manufactured in Córdoba, Argentina, and features additional styling and equipment updates. Unfortunately, the new Clio Mío keeps the dashboard of the pre-facelift Clio but with optional color matching inserts.

In 1999, Renault launched the saloon version of the Clio II, named Clio Symbol in Turkey and Eastern Europe, Thalia in Central Europe, Clio Classic in Asia and North Africa, Clio Sedan in Brazil and Paraguay, or Symbol in the rest of South America (except Argentina where it was called Clio). The car was intended for sale in developing countries, where saloons were traditionally preferred over hatchbacks, most notably in Eastern Europe, where the Thalia was cheaper than the Clio, but was still about 30% more expensive than the Dacia Logan, also sold by Renault as a low cost model. In some Latin American markets the sedan was offered as the Nissan Platina (manufactured in Aguascalientes, Mexico), with slight changes in the front of the car to make it resemble the Nissan Altima. The sedan version of Clio was facelifted in 2002, with new exterior similar to facelifted Clio, better equipment and safety levels.

In fall of 2006, an improved Clio sedan has been offered, renamed in Eastern Europe as Renault Symbol. This model featured the interior of the facelifted Clio II with very minor parts commonality with Megane II, as well as new standard and optional equipment, such as automatic air conditioning and a CD player. The model earned moderate reception in the domestic market.

Renault introduced the second generation of the Symbol/Thalia model at the 2008 Moscow Motor Show. The new model features chrome-trimmed front grille and rear fascia, while powered by similar engines as the Dacia Logan range. The new Symbol/Thalia was designed for the Eastern and Central Europe, Russia, Turkey and North Africa. 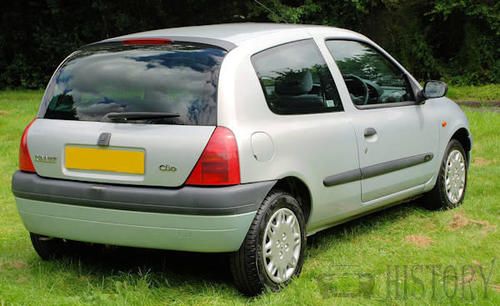