The Clio was introduced at the Paris Motor Show in June 1990 and sales in France and the rest of the continent began then, although sales in Britain did not begin until March 1991. The Clio largely replaced the aging Renault 5 (which continued to be built in lower volumes until 1996 in Slovenia as a budget alternative). The engine range available at launch included 1.2 L and 1.4 L E-type "Energy" petrol inline-four engines (first seen in the R19) and 1.7 L and a 1.9 L diesel (both based on the F-type unit) engines. The petrol engines gradually replaced carburettors with electronic fuel injection systems throughout production, in order to conform to ever stricter pollutant emission regulations.

A minor trim facelift occurred after only a year of being on sale. A new "smooth" version of the Renault diamond badge (the previous "ribbed" badge was being phased out at the time) and a new front seat design were the only changes. The altered design did not constitute a new "phase". In March 1994 (at the Geneva Motor Show), the Phase 2 model was launched, with small updates to the exterior and interior of the Clio.Most noticeable was the change in the front grille from two metal ribs to a single colour-coded slat grille. The bump strips were made slightly larger and rounder, and the car's trim level badge was incorporated into the bump strips. The badges on the tailgate strip were moved up onto the tailgate itself and the tailgate strip was given a carbon fibre look. The rear light clusters were given a slightly more rounded bubble shape to them, giving the Clio a more modern look. The clusters, however, are physically interchangeable with Phase 1 clusters.

In 1996, with the arrival of the Phase 3 facelifted Clio, the 1.2 L Energy engine was replaced by the 1,149 cc D7F MPi (Multi Point Injection) DiET engine, first used in the Renault Twingo; for some time also, versions were available with the older 1239 cc "Cléon" unit from the original Twingo. The cylinder head design on the 1.4 L E-Type was also slightly altered for the Phase 3 models in a bid for better fuel economy. This resulted in the engines producing slightly less power than their earlier versions. 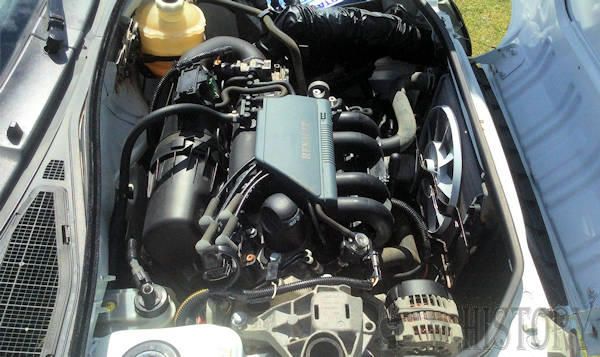 The Phase 3 Clios had a slightly more noticeable update than the Phase 2's. The Phase 3 has different, more rounded headlights, incorporating the turn signal in the unit with the headlight. The bonnet curved more around the edges of the lights. The tailgate incorporated a third brake light and a new script "Clio" name badge, following the same typeface as contemporary Renaults. Some mechanical improvements were also made.

Renault also released a warm hatch version of the Clio for the 1993 model year. It was aesthetically very similar, but with the addition of a 110 PS (81 kW) 1.8 L eight-valve engine, side skirts and disc brakes on all wheels. This, with multi-point fuel injection, was badged as the RSi.From 1991 a lighter tuned version of this 1.8 litre engine (with single-point injection) joined the earlier 1.7 used in the very luxurious Baccara version which was sold in some continental European markets. In addition to this reasonably powerful engine, the Baccara has a luxurious interior with lots of leather and wood, as well as power windows, locks, etcetera. The Baccara was renamed "Initiale" in 1997, in line with other Renaults, differing from the Baccara mainly in the wheel design.

During 1991, a 1.8 L 16-valve engine producing 137 PS (101 kW) (also first seen in the R19) capable of propelling the car to 209 km/h (130 mph) was introduced to the Clio engine range, known simply as the Clio 16S in France (S for "soupapes", the French word for valves), and Clio 16V in export markets. As well as having higher top speed than a regular Clio, the 16S sported wider plastic front wings, an offset bonnet vent, wider rear arches and uprated suspension and brakes, and colour-coded front mirrors and bumpers. The RSi side skirts were omitted, however. Interior wise, the 16V model had an extended instrument panel that housed dials for engine oil pressure, oil temperature, and oil level (which only indicates on engine start). The seats were also more supportive to match the sporting nature of the model. The non-catalyzed versions, still available in some markets, offered 140 PS (103 kW) and marginally higher performance with top speed up to 212 km/h (132 mph) and the 0-100 km/h time dropping from 8 to 7.8 seconds.

The Clio was voted European Car of the Year for 1991, and soon became one of Europe's best-selling cars, as well as the first Renault to be consistently among the top-10 best sellers in the United Kingdom. UK sales were helped by a famous television advertising campaign by Publicis shot in France, featuring the two main characters of Nicole (played by Estelle Skornik, who was not French nor did she have a driving licence at the time) and Papa.

From 1991 to 1993, trim levels were identical in every European country. Starting in 1993, trim levels designations became more varied across the various markets. The car was sold as the Renault Lutecia (from Lutetia, the latin name for Paris) in Japan, as "Clio" was used there by Honda for one of their domestic marketing networks.

Sales across Europe were strong throughout its production life, and a decade after its demise it is still a common sight on Europe's roads. 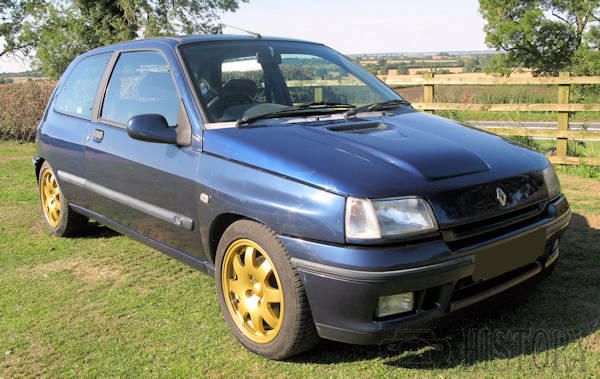 In 1993, Renault launched the Clio Williams as a limited edition of 3,800 cars (1,300 more than they needed for homologation purposes) with each car bearing a numbered plaque on the dash. These sold out so quickly that Renault ended up building 1,600 more.

After the first series, due to the demand, Renault built Willams 2 and Williams 3. Altogether there were 12,100 Clio Williams made. But because a lot of new road cars were directly converted to race cars and when damaged replaced with another converted road car, actual number of road cars is significantly lower. A lot of cars have been broken for parts in the last few years, making the road cars in original condition even more rare.

The car was named after the then Renault-powered Formula One team WilliamsF1, though Williams had nothing to do with the design or engineering of this Clio. The modifications to the Clio 16S on which it was based were the work of Renault Sport, Renault's motorsport division.

The 2.0 L 16-valve straight-4 engine rated at 147 PS (108 kW) and a top speed of,215 km/h (134 mph) with performance-tuned ride and handling. Renault later released the Williams 2 and Williams 3 special editions, much to the chagrin of those owners who had been assured of the exclusivity of the "original" Williams. One common mistake people can make is thinking that the 2.0 16V (F7R) used in the Williams is simply a bored out 1.8 16V (F7P), whereas, in reality the large engine had different size valves, cams, stroked crank and engine oil cooler. Other differences between the Williams and the Clio 16S it is based on include a wider front track with some parts borrowed from the Renault 19, wider Speedline alloys, uprated (JC5) gearbox, bespoke four-to-one manifold, firmer suspension, and some cosmetic differences on the exterior and interior.

The differences between the three versions of the Williams were largely a reflection of phase changes across the Clio range, e.g. the gradual addition of enhanced safety features and cosmetic variations. Other than this, the Williams 1 and 2 had no sunroof and were painted in 449 Sports Blue. The final Williams 3 was painted in a slightly brighter shade of blue (432 Monaco Blue) and finally gained a sunroof which had long been standard on virtually all previous Clios. The original Williams was the lightest of the three, lacking the electrics necessary for the sunroof or the mirrors, and was the only one to sport a metal plaque stating the build number.

Respected motoring journalists consistently rate the Williams as one of the very best hot hatches ever made, regardless of era. One of its many accolades was 6th place in Evo's Car Of The Decade feature in 2004.

Renault Clio Williams was and still is a very popular rally car. Basic racing version (Gr.N) had racing suspension, different engine management and a more free flowing exhaust. Power output was around 165 PS (121 kW). Roll cage was made by Matter France. Bucket seats were made by Sabelt.

Next step up was Gr.A car, which was fitted with 16″ Speedline 2012 rims (with optional extractors), further improvements on suspension and more tuned engine producing between 205-220 PS. Front brakes were also uprated with 323mm discs and 4 pot Alcon brake calipers.