The Renault 20 and Renault 30 are two executive cars produced by the French automaker Renault between 1975 and 1984. The most upmarket and expensive Renaults of their time, the two cars were almost identical as regards sheet metal and mechanicals; the 30 was the larger-engined and more expensive of the two. The two cars were easily distinguished between each other from their differing headlight configuration — the Renault 20 had two single rectangular headlights whereas the Renault 30 had quadruple round headlights. The interior specifications differed substantially however with the Renault 30 having a higher specification in all models. Over 622,000 R20s and 145,000 R30s were produced in Sandouville near Le Havre, France.

Launched in March 1975, the Renault 30 TS was the first Renault with an engine larger than four cylinders since before World War II. It was one of the first cars (the other two being the Peugeot 604 and Volvo 264) to use the then newly introduced 2664 cc PRV V6 engine, which was developed jointly between Peugeot, Renault and Volvo; the PRV produced 130 PS (96 kW) and could power the R30 to a top speed of 185 km/h (115 mph). The vehicle's hatchback styling was derivative of the extremely successful Renault 16.

The more affordable Renault 20, which was presented at the Paris Salon in November 1975 (exactly eight months after the Renault 30 TS), used the same hatchback body styling as the 30 but with two rectangular headlights instead of the R30's quadruple round lights. Under the bonnet, the 20 had the smaller four-cylinder 1647 cc engine (from the Renault 16 TX) rated at 90 PS (66 kW). Other technical differences between the 20 and 30 were that 20 used drum brakes at the rear wheels, 13 inch wheel rims, and a smaller 60-litre fuel tank. The 20 came in three different trim variations: L, TL and GTL. The two cars were effectively two 'badge engineered' versions of the same car with separate numeric classification.

Both the 20 & 30 were advanced in terms of safety, featuring front and rear crumple zones as well as side impact protection.

Reliability issues, such as niggling mechanical faults (which sometimes proved expensive to fix) plagued both cars throughout their lifetimes. Shortly after their introduction, it soon became quite clear that the Renault 20 was too underpowered to cope with the overall size and weight of the car and that the Renault 30 was seen as too expensive for what was effectively the same car. In response to this, the R20TS was introduced, and used a new four-cylinder 1995 cc overhead camshaft engine rated at 109 PS (80 kW) (which was shared with the Citroën CX and later the Peugeot 505). The new 2.0-litre engine was universally regarded as a big improvement. The following year saw the introduction of the R30 TX (a more luxurious fuel-injected version of the R30 TS), then the R20 Diesel.

In 1979, the then state-owned Romanian manufacturer Dacia produced a small number of Renault 20s under the name Dacia 2000, reserved entirely for the dignitaries and secret police of the Communist government led by Nicolae Ceauşescu. 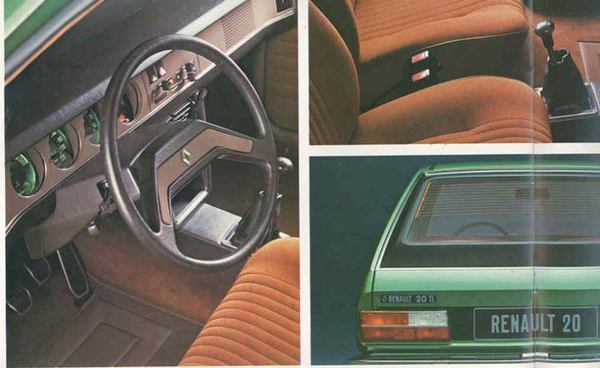