The Reliant Robin is a small three-wheeled car formerly manufactured by the Reliant Motor Company in Tamworth, England. It is markedly different from most mainstream cars due to its fibreglass bodyshell and compact three-wheeled platform which allow it a special taxation and licensing class under British regulations. The Robin has also earned a prominent place in British popular culture, in particular as the object of detrimental humour.

The Robin was first manufactured in October 1973, a direct replacement for the Reliant Regal. The final original version of the Robin rolled off the production line in 1981, when the model was replaced by the restyled Reliant Rialto. The vehicle was also produced under license in Greece by MEBEA between 1974 and 1978. It was also manufactured in India by Sunrise Automotive Industries Limited as Badal.

In 1989, Reliant revived the Robin name, producing a new and totally revamped Robin featuring a new fibreglass body, and increased engine power. The Rialto continued in production alongside the new Robin until 1998. This Robin was facelifted again in 1999 when the final version was launched that had its biggest change since originally launched with completely new panels, and Vauxhall Corsa front lamps. Designed as a hatchback-only model it lasted until February 2001 when Reliant announced the end of production. The final sixty-five Robins designed in 1999 manufactured by Reliant formed a Special Edition known as the Robin 65, featuring leather trim, walnut interior, and a numbered plaque, and sold for approximately £10,000. Manufacturing of the Robin resumed under licence by a company called B&N Plastics in July 2001, but stopped in October 2002.

Despite its size, by being a three-wheeler with an official mass below 450 kg (992 lb), the Robin can be driven by holders of a B1 category driving licence in the United Kingdom, and registered and taxed at motorcycle rates, which gives a saving of 55 GBP per year over a conventional car. The single wheel in the front steers, while the engine (also in the front) drives the rear axle.

Despite the car's reputation for being unstable, a 2011 survey reported that Reliant Robin owners were statistically Britain's safest drivers. 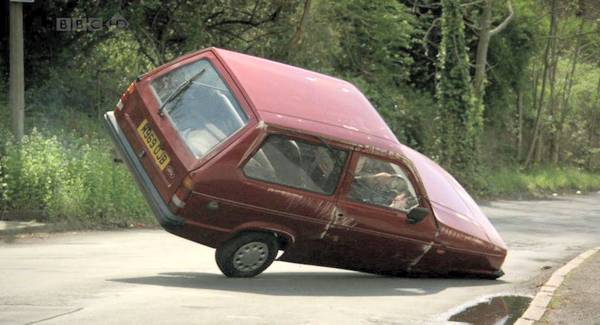 Reliant three-wheelers enjoy a special place in British culture, often as the butt of jokes, such as when Patsy Stone dismissively refers to Edina Monsoon's isolation chamber as resembling one in the TV series Absolutely Fabulous. In the United Kingdom, the Robin is sometimes affectionately nicknamed the "Plastic Pig" because of its distinctive shape and fibreglass body shell. It is also often, and erroneously, referred to as the Robin Reliant. Georgia Nicolson, the fictional heroine of Louise Rennison's Confessions of Georgia Nicolson book series aimed at teenaged girls, regularly makes fun of the family car, referred to as a Robin Reliant.

The Reliant Robin is staple material for comedian Jasper Carrott. However, perhaps two of the best known Reliants in British comedy are actually Reliant Regal Supervans — the dirty yellow van owned by the Trotter brothers in Only Fools and Horses, and the light blue van that always ends up getting tipped over, crashed into, bumped out of its parking space etc. by a British Leyland Mini in Mr Bean.

The Robin has been featured in several British car shows. For example, in the 18 June 2007 episode of Fifth Gear, Tom Ford and Johnny Smith both modified a Reliant Robin, to compete against each other in a speed challenge and a destruction derby. In the 18 February 2007 episode of Top Gear (Series 9, Episode 4), a Reliant Robin was used by Richard Hammond and James May in an attempt to modify a normal K-reg Robin into a reusable space shuttle. The booster rockets separated cleanly, but the fuel tank did not detach, and the Robin crashed into the ground and exploded. In a subsequent episode of Top Gear (Series 15, Episode 1), a Reliant Robin was used by Jeremy Clarkson to drive 14 miles from Sheffield to Rotherham. He described driving it as dangerous as "inviting your mum 'round for an evening on chatroulette," and that "(the Reliant Robin) wasn't funny, it was a complete menace." During the segment, Clarkson rolled the Robin at least six times due to the odd-sized wheels and the weights which were attached to the car to allow filming, before having front support wheels mounted for safety. The following two episodes featured racing driver The Stig and Ken Block on their Test Track in Robin, which neither of them could finish a clean lap, and rolled over like Clarkson. The cars used in the these episodes were extensively modified. Amongst the changes, the cars had larger diameter front wheel, roll cages and sealed fuel tanks.

Reliant Robins make semi-regular appearances on Scrapheap Challenge, often stripped down to a light three-wheeled chassis. One team converted the car into a wheelie-racer.

The 2011 Disney film Cars 2 features a French character named Tomber who is patterned on a Reliant Regal saloon car, though he also has been compared to a Robin. His name means "to fall" or "fallen" in French, referencing the reputed instability of three-wheel vehicles.

The first television ad for Chrysler's revived Dodge Dart, which is now based on a Fiat platform, also features a scene referencing the notorious reputation of the Robin. The ad, first shown to American audiences during the 2012 Major League Baseball All-Star game, suggests that the designers of the new Dart "[kicked] out the committees" because "they lead to compromise, and compromise leads to this: [shot of Robin rolling over]".

On the fourth season of the BBC television show Bang Goes the Theory, Jem Stansfield used a Reliant Robin as a stylus for his singing road.