The Reliant Rialto is a three-wheeled, subcompact car that was manufactured by Reliant Motor Company, replacing the original Reliant Robin in 1981. The Rialto was discontinued in 1998 while production of a new Robin model, introduced in 1989, continued. The Rialto was made in three different body types: saloon, estate and panel van. With a galvanised chassis and a fiberglass body, the Rialto was very resistant to corrosion. It was powered by Reliant's 850 cc aluminium water-cooled engine and, with the improved aerodynamics of the new body style, was a much more stable vehicle at speed. New to the Rialto was the single windscreen wiper, centrally located to clear the whole screen. 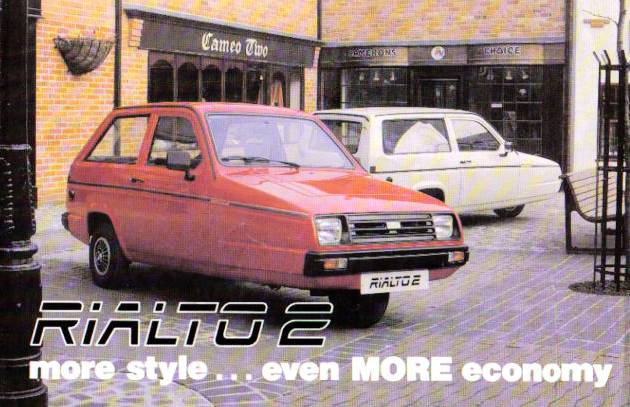 TOP GEAR Challenge: Hammond and May, preposterously, try to convert a 1992 Reliant Robin (Rialto) into a space shuttle, on the orders of 'John F. Clarkson'. They were given 12 days to build it and help from the British Amateur Rocket Society. Eight tonnes of thrust were required to launch the Robin — the largest non-commercial rocket launch undertaken in Europe. It was not intended to put a payload into any meaningful orbit, but merely to gain a few thousand feet of height and then land on a runway. Hammond & May reacted with genuine surprise and elation as the Reliant Robin (Rialto) took off and everything seemed to be working until a release bolt attaching the Robin to the fuel tank failed to detach. As a result, it spiraled out of control and crashed in a massive explosion on a nearby hillside as they watched with expressions of shock and disappointment.