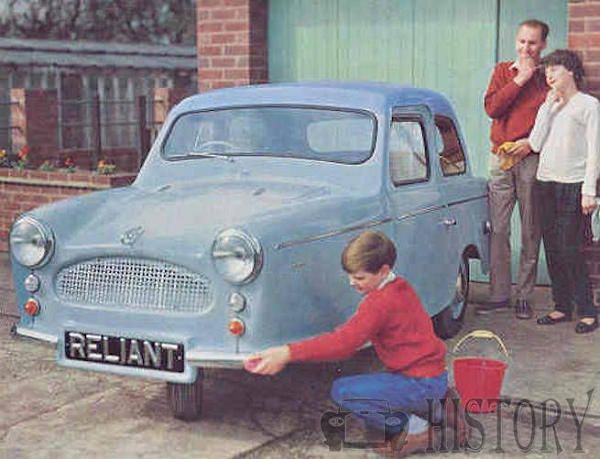 The Reliant Regal was a small three-wheeled car manufactured from 1953 until 1973 by the Reliant Motor Company in Tamworth, England, replacing the earlier Reliant Regent cyclecar van. It was a three-wheeler, therefore under UK licencing it was considered a tricycle. Due to the lightweight construction, under 7 cwt, the vehicle could be driven on a motorcycle licence in the United Kingdom. A light-commercial version with a side-hinged rear door was marketed as the Reliant Supervan.

Following the launch of the Mk I in 1953, the Regal went through many revisions in a short space of time, with the "first generation" using the original wooden frame and discrete-panel bodywork design through to the 1961 Mk VI. 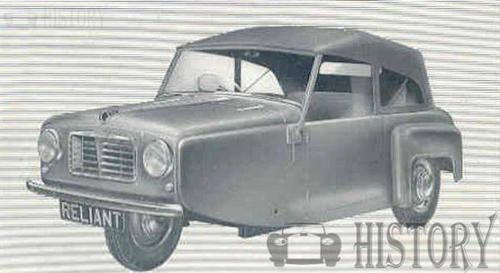 Regals MkI-MkVI had aluminium bodies and 747cc side-valve engines. However, during the 1950s, the price of aluminium increased markedly across Europe. In response, Reliant developed an expertise in making panels of glass fibre which piece by piece replaced the aluminium panels, until the 1956 Mark 3 Regal featured a wholly glass fibre body. Unlike Panhard, who responded to the increased cost of aluminium by substituting heavier steel panels, Reliant's choice of the glass fibre technology ensured that the Regal was able to retain its advantageous light weight, with the resulting ability to use smaller, lower powered and therefore cheaper and more economical engines. 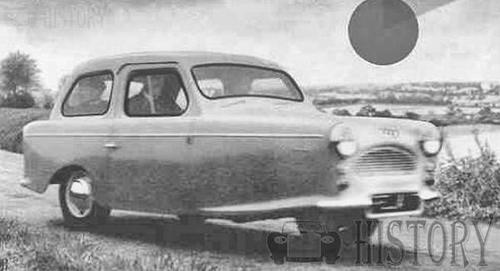 The Regal Mk VI was the last Regal to be powered by a side-valve engine, as by 1962 Reliant had developed their own all aluminium 600 cc OHV engine that was fitted into the new Regal 3/25.

The Regal 3/25 version was introduced in October 1962 and unlike previous Regals, this no longer had a wooden frame and instead had a unitary construction body of reinforced fibreglass. Fibreglass was moulded in two major units (outer and inner) and then bonded together and bolted to a steel chassis. Meanwhile, on 25 April 1968, a year before BMC celebrated their 2,000,000th Mini Reliant sales director T.H.Scott personally drove the 50,000th Regal 3/25 off the assembly line at Reliant's Tamworth plant.

A few months later, in August 1968, the 701 cc engine introduced in the Reliant Rebel the previous Autumn found its way into the Regal. For the three-wheeler, the compression ratio was lowered to 7.5:1, reducing the power to a claimed 29.5 bhp from the Rebel's 35 bhp. Nevertheless, this still represented a useful increase over the 26 bhp claimed for the 600 cc unit which the 701 replaced.

Exposure in TV and film

Reliant Regals and Robins enjoy something of a special place in British culture as symbols of British eccentricity. An example of a Reliant is the iconic van belonging to Del Boy and Rodney Trotter in the long-running BBC sitcom Only Fools and Horses. The van is frequently, and incorrectly, referred to as a Robin, but is actually a Regal Supervan. The Trotters' original van is now on display in the National Motor Museum, Beaulieu, while one of two 'back-up' vans was sold in 2007 for over £44,000to British boxer Ricky Hatton. Copies of this iconic van appear for sale on auction websites.

In another TV comedy, Mr. Bean, a running gag in the series is the titular character played by British Comedian Rowan Atkinson frequently comes into conflict with a light blue Reliant Regal Supervan III, which gets tipped over, crashed into, or bumped out of its parking space. One of the vehicles used in the Mr. Bean series was destroyed after a stunt.

The 2011 Disney film Cars 2 features a French character named Tomber who is patterned on a Reliant Regal saloon car, with some creative modifications, such as the headlights of a DS. His name means "to fall" in French, referencing the reputed instability of three-wheel vehicles.

A Reliant Regal is shown in the closing ceremony of the 2012 London Olympics with it falling apart and Batman and Robin coming out of it, a plot that appeared in an episode of the long-running BBC sitcom Only Fools and Horses.