The Amphicar is an amphibious automobile, the first such vehicle mass-produced for sale to the public starting in 1961. The German vehicle was designed by Hanns Trippel and manufactured by the Quandt Group at Lübeck and at Berlin-Borsigwalde. Its name is a portmanteau of "amphibious" and "car". The Amphicar was designed to be marketed and sold in the USA. Compared to most boats or cars, its performance was modest, and only 4000 were produced by 1965. Nevertheless, it is still among the most successful amphibious civilian autos of all time, and still often prized and preserved as novelty collectible automobiles today.

Appearance Front undersurface is slightly pointed and sharply cut away below. The wheels are set low, so that the vehicle stands well above ground level when on dry land. Front and rear bumpers are placed low on the body panels (but fairly high in relation to dry ground). The one-piece windshield is curved. The foldable top causes the body style to be classified as cabriolet. Its water propulsion is provided by twin propellers mounted under the rear bumper. The Amphicar is made of mild steel.

The powerplant was the 1147 cc (69 in³) engine from the British Triumph Herald 1200. Many engines were tried in prototypes but the Triumph engine was "state of the art" in 1961 and had the necessary combination of performance, weight, cool running and reliability. Updated versions of this engine remained in production in the Triumph Spitfire until 1980. The Amphicar engine had a power output of 43 hp (32 kW) at 4750 rpm slightly more than the Triumph Herald due to a shorter exhaust.Called the "Model 770", the Amphicar could achieve speeds of 7 knots in the water and 70 mph (110 km/h) on land. Later versions of the engine displaced 1296 cc and 1493 cc and produced up to 75 bhp (56 kW). Some Amphicar owners have fitted these engines to improve performance.

One owner was quoted "It's not a good car and it's not a good boat, but it does just fine" largely because of modest performance in and out of water. Another added, "We like to think of it as the fastest car on the water and fastest boat on the road."

In water as well as on land, the Amphicar steered with the front wheels, making it less maneuverable than a conventional boat. Time’s Dan Neil called it "a vehicle that promised to revolutionize drowning", explaining, "Its flotation was entirely dependent on whether the bilge pump could keep up with the leakage."[ In reality a well maintained Amphicar does not leak at all and can be left in water, parked at a dock side, for many days.

In 1965, two Amphicars successfully navigated the Yukon River in Alaska.

Howard Singer of San Diego, California sailed an Amphicar from the mainland to Catalina Island in the late 1970s.

President Lyndon B. Johnson was known as an owner of an Amphicar. Johnson, a known practical joker, was said to enjoy frightening visitors at his Johnson City, Texas ranch by driving them downhill in his Amphicar, directly into his property's lake, all the while shouting that he had malfunctioning brakes. 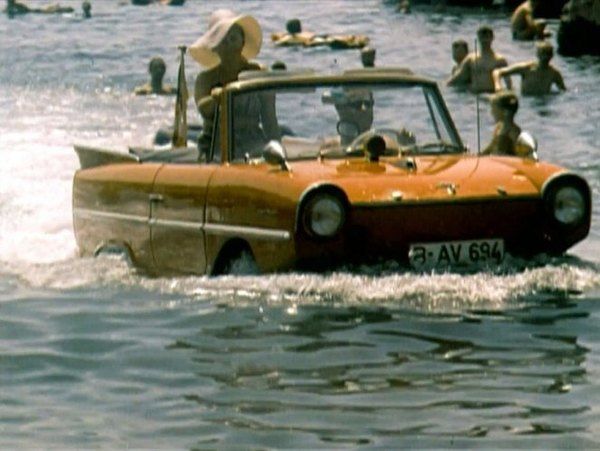 Production started in 1961. From 1963 to 1965 cars were assembled from parts inventory built up in anticipation of sales of 20,000 per year. Production ended in 1965. Cars were titled in the year they actually sold rather than when they were produced, e.g. an Amphicar assembled in 1963 could be titled a 1968 if that was when it was first sold. Most Amphicars were sold in the United States. Cars were sold in the United Kingdom from 1964. Total production was 3,878 vehicles before the company folded. 99 right-hand drives were converted from left-hand drives. Some were used in the Berlin police department and others were fitted for rescue operations. 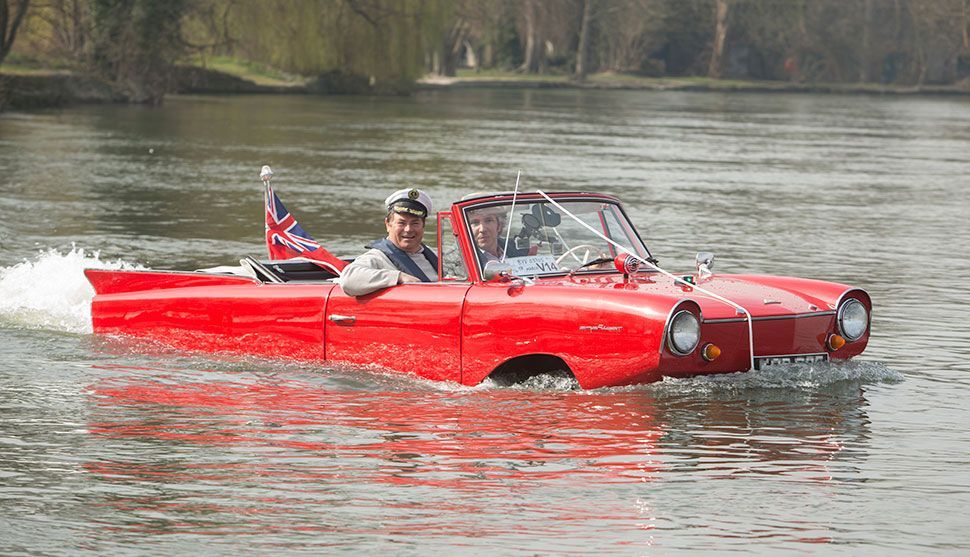