Automotive manufacturer Albergaria a Velha, Portugal From 1952 to 1958. 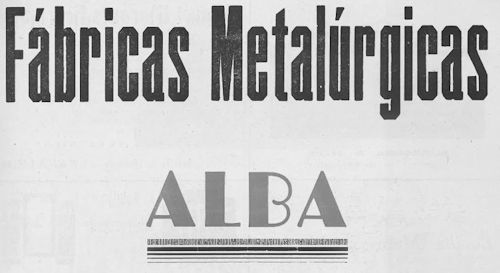 Alba was from 1952 to 1958 a Portuguese manufacturer of Sports automobiles .

Founded in 1921, the metalworking company was first Fundição Lisbonense , then Fundição Albergariense , and finally in 1923 Augusto Martins Pereira or Alba , a derivative of the place name Albergaria. The son of the company founder, António Augusto Martins Pereira, was infected by the emerging new fever of car racing in the early 1950s in Portugal and began in the family of aluminum family business also the production of automobiles. The first vehicle was built by him on the basis of a Fiat508 C 1100 designed and completed in 1952. It was intended primarily as a racing car, but was allowed for road use also because at the time the drivers drove their cars personally to the races. In 1953 Alba built a second car, with a 1100 cc engine from Peugeot .

In 1954, the Automóvel Club de Portugal made changes to its rally regulations, and allowed engines to 1500 cc. This caused the increased participation of foreign cars. Especially by the competition of Porsche cars felt Pereira challenged, and he decided to install a 1500 cc engine in his car. He decided to develop his own engine. In 1954 he completed the ALBA 1500, with which he was up to 200 kmh  reached his goal to beat Porsche cars in various races.