The Porsche 968 is a sports car made by Porsche AG from 1992 to 1995. It was the final evolution of a line of water-cooled front-engined rear wheel drive models begun almost 20 years earlier with the 924, taking over the entry-level position in the company lineup from the 944 with which it shared about 20% of its parts. The 968 was Porsche's last new front-engined vehicle before the introduction of the Cayenne SUV in 2003.

Porsche's 944 model debuted for the 1982 model year, was updated as "944S" in 1987 and as "944S2" in 1989. Shortly after the start of production of the S2 variant, Porsche engineers began working on another set of significant upgrades for the model, as executives were planning a final "S3" variant of the 944. During the development phase, 80% of the 944's mechanical components were either significantly modified or completely replaced by the engineers, leaving so little of the outgoing S2 behind that Porsche management chose to introduce the variant as a new model, calling it the 968. In addition to the numerous mechanical upgrades, the new model also received significantly evolved styling both inside and out, with a more modern, streamlined look and more standard luxury than on the 944. Production was moved from the Audi plant in Neckarsulm(where the 924 and 944 had been manufactured under contract to Porsche), to Porsche's own factory in Zuffenhausen.

Like the 944, the 968 was sold as both a coupe and a convertible. The 968's basic styling was an evolution on that of the outgoing 944, itself based on the earlier 924. In an attempt to create a "family resemblance" between models and associate it with the luxury 928 gran turismo, elements were borrowed from its upscale sibling. Others included a swooping headlamp design inspired by the 959 later incorporated in the Type 993911.

The 968 was powered by an updated version of the 944's straight-four engine, now displacing 3.0 L with 104 mm bore, 88 mm stroke and producing 240 PS (237 bhp; 177 kW). Changes to the 968's powertrain also included the addition of Porsche's then-new VarioCam variable valve timing system, newly optimized induction and exhaust systems, a dual-mass flywheel, and updated engine management electronics among other more minor revisions. The 968's engine was the second-largest four-cylinder ever offered in a production car up to that time. A new 6-speed manual transmissionreplaced the 944's old 5-speed, and Porsche's dual-mode Tiptronic automatic became an available option. Both the VarioCam timing system and Tiptronic transmission were very recent developments for Porsche. The Tiptronic transmission had debuted for the first time only 3 years prior to the debut of the 968, on the 1989 Type 964 911. The VarioCam timing system was first introduced on the 968 and would later become a feature of the Type 993 air-cooled six-cylinder engine.

Much of the 968's chassis was carried over from the 944 S2, which in itself shared many components with the 944 Turbo (internally numbered 951). Borrowed components include the Brembo-sourced four-piston brake calipers on all four wheels, aluminium semi-trailing arms and aluminum front A-arms, used in a Macpherson strut arrangement. The steel unibody structure was also very similar to that of the previous models. Porsche maintained that 80% of the car was new.

From 1993 through 1995, Porsche offered a lighter-weight "Club Sport" version of the 968 designed for enthusiasts seeking increased track performance. Much of the 968's luxury-oriented equipment was removed or taken off the options list; less sound deadening material was used, electrical windows were replaced with crank-driven units, upgraded stereo systems, A/C and sunroof were still optional as on the standard Coupe and Convertible models. In addition, Porsche installed manually adjustable lightweight Recaro racing seats rather than the standard power-operated leather buckets (also manufactured by Recaro), a revised suspension system optimized and lowered by 20 mm for possible track use, 17-inch wheels (also slightly wider to accommodate wider tires) rather than the 16-inch as found on the Coupe and wider tires, 225 front and 255 rears rather than 205 and 225 respectively. The four-spoke airbag steering wheel was replaced with a thicker-rimmed three-spoke steering wheel with no airbag, heated washer jets were replaced with non heated, vanity covers in the engine bay were deleted, as was the rear wiper. The Club Sport has no rear seats, unlike the 2+2 Coupé.

Club Sports were only available in Grand Prix White, black, Speed yellow, Guards red, Riviera blue or Maritime blue. Seat backs were colour-coded to the body. Club Sport decals were standard in either black, red or white but there was a 'delete' option. All Club Sports had black interiors with the 944 S2 door cards. Due to the reduction in the number of electrical items the wiring loom was reduced in complexity which saved weight and also the battery was replaced with a smaller one, again reducing weight. With the no frills approach meaning less weight, as well as the optimising of the suspension, Porsche could focus media attention on the Club Sport variants fast road and track abilities. This helped to slightly bolster the flagging sales figures in the mid-1990s. The Club Sport variant achieved a 'Performance Car Of The Year' award in 1993 from Performance Car magazine in the UK. Club Sport models were only officially available in the UK, Europe, Japan & Australia, although "grey market" cars found their way elsewhere. The declared weight of the 968 CS is 1320 kg, ~100 kg lighter than the regular 968. Acceleration from standstill to 100 km/h (62 mph) is 6.3 seconds and a top speed is 260 km/h (160 mph).

A UK-only version called "968 Sport", was offered in 1994 and 1995, and was essentially a Club Sport model (and was produced on the same production line with similar chassis numbers) with electric windows, electric release boot, central locking, cloth comfort seats (different from both the standard and the Club Sport). With the added electrics the larger wiring loom was used. The Sport Variant also got back the two rear seats, again in the cloth material specific to the Sport. At £29,975, the 968 Sport was priced £5,500 lower than the standard 968, but had most of the latter's desirable "luxuries" and consequently outsold it by a large margin (306 of the 968 Sport models compared to 40 standard 968 coupés).

A 968 CS driven by Peter Fitzgerald and Brett Peters won the 1993 Sandown 6 Hour race in the Australian competition debut of the model.

In 1993, Porsche Motorsports at Weissach briefly produced a turbocharged 968 Turbo S, a fairly odd naming choice for Porsche which usually reserves the added "S" moniker for models that have been tuned for more power over a "lesser" counterpart, such as with the 911 Turbo. The 968 Turbo S shared the same body and interior as the Club Sport and visually can be identified by the NACA bonnet hood scoops, adjustable rear wing and deeper front spoiler. Powered by a large 8 valve SOHC cylinder head (944 Turbo S) with 3.0 Liter 944S2 style engine block. Tests conducted in 1993 produced a 0 to 60 mph (97 km/h) of 4.7 seconds and a top speed of 282 km/h (175 mph), performance comparable to the much newer Type 996 911. It generated 305 bhp (227 kW) at 5600 rpm with a maximum torque of 500 N·m (370 lb·ft) at 3000rpm. Only 16 were produced in total and only for sale in mainland Europe.

The 968 was Porsche's last new front-engined vehicle of any type before the introduction of the Cayenne SUV in 2003. Its discontinuation in 1995 coincided with that of the 928, Porsche's only other front-engined car at the time.

In 2010, Porsche released the Panamera a front-engined, 4-door sports-touring sedan. A successor to the 928, based on that sedan's architecture, is predicted to follow.

The 968 was also the last Porsche sold with a four-cylinder engine prior to the introduction of the 718 Boxster in 2016.

While lacking the wider ranging appeal of the 911, the 968 has nonetheless carved out its own niche in the hearts of enthusiasts. This is likely due to the 968's unique combination of speed and practicality, and low production numbers. Clean, low mileage examples have become extremely scarce and expensive by 2013. In April 2012, when the Gooding & Company bidding ended and the auctioneer's hammer finally fell, the only 1 Red 968 Turbo RS 350 hp machine had fetched a hefty $346,000 price. 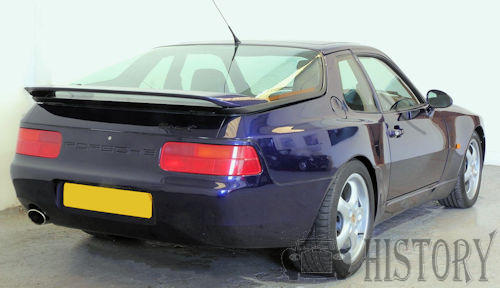