The Porsche 996 is the internal designation for the Porsche 911 model manufactured and sold between 1998 and 2005. It was replaced by the Type 997. Both body styles were produced by Porsche in 2005, based upon model type.

At its debut, the 996 featured the most significant changes to the Carrera model since its 1963 introduction; the most significant change with this new iteration is the water-cooled engine replacing the previously air-cooled engine. Progressively stringent noise regulations, environmental concerns, a higher expectation for refinement and a high-performance 4 valve per cylinder engine made the switch necessary. Other changes include a sleeker body with a more steeply raked windshield and a re-designed interior.

The Porsche 996 was an all new design made by Harm Lagaay; the first new 911 that didn't carry over a significant component from a previous variant. All new body work, interior and drive-train including the first water-cooled engine in a 911. The Porsche 996 replaced the Porsche 993.

The first 996s were available as a coupe or cabriolet (Convertible) initially with rear wheel, or later, with four-wheel drive, and a 3.4 litre flat-6 normally aspirated engine producing 296 bhp (224 kW). These cars had the same headlights as the Porsche Boxster. Porsche Carrera owners complained loudly and long about the "lower priced car that looked just like theirs did", hence the headlight change for the Carrera in 2002. The design for these headlamps could be traced all the way back to the Porsche Panamericana concept car.

In 2000, Porsche debuted the 996 Turbo, equipped with four-wheel-drive and a 3.6 litre, twin turbocharged and intercooled flat-six producing 420 bhp (309 kW), making the car capable of 0 to 60 mph in 4.2 seconds. An X50 option which included larger turbochargers and intercoolers along with revised engine control software became available from the factory in 2002, increasing power to 450 hp (336 kW). (Porsche produced a Turbo S in 2005, which also had the x50 option with 450 bhp, alongside the formerly optional Carbon fibre-reinforced Silicon Carbide (C/SiC) composite ceramic brakes (PCCB) as standard equipment.)

In 2001, horsepower on the base Carrera model was increased by 4 bhp to 300 bhp. In 2002, the standard models underwent minor re-styling, which included switching to the Turbo-style headlamps and to a new front fascia. These were sometimes known as the Mk2 generation of the 996, or the 996.2. In addition, engine capacity was also increased to 3.6 litres across the range, yielding gains of 15 horsepower for the naturally aspirated models. 2002 also marked the start of the production of the 996 based Targa, featuring a sliding glass "green house" roof system like its Type 993 predecessor. Also in 2002, the Carrera 4S model was first introduced. The C4S as it is commonly called, shares the widebody look of the Turbo as well as the brakes and suspension.

The 996 platform was used as the basis for two lightweight GT variants called GT2 and GT3. The GT3 was based on the standard 996 Carrera, but was stripped of a great deal of equipment for weight savings, featured stiffer, adjustable suspension and upgraded brakes, and used the bodyshell of the four-wheel-drive version, which incorporated additional front-end stiffening. It was produced in two versions. The first, commonly referred to as the Mk.I GT3, was released in 1999 in all markets, save North America. It featured a naturally aspirated version 3.6L flat six making 360 bhp (270 kW). This engine was shared with the 996 Turbo and was a derivative of the Le Mans winning engine developed for the 911 GT1. The Mk.II GT3 variant was based on the second generation of the 996, and featured updated aerodynamics, and a more powerful version of the 3.6L engine from the MK.I, now producing 380 bhp (280 kW). The Mk.II was the first GT3 marketed in the North America. In a 2004 testing of the Mk.II GT3, the car accelerated 0-60 mph in 4.0 seconds, and produced 1.03 g on the skidpad, the second highest number ever recorded by a street legal automobile.

The counterpart to the GT3, the GT2, was RWD as well, to save weight and to avoid power losses through the transmission. (This is primarily due to the fact that it was built to compete in GT2 class racing, which mandated RWD). It received an added group of aerodynamic body parts, and a re-tuned version of the 996 Turbo's 3.6 litre, twin turbocharged engine featuring larger turbochargers and intercoolers, revised intake and exhaust systems, and re-programmed engine control software. The result was 489 hp (365 kW) and 484 lb·ft (656 N·m) of torque respectively, enough to launch the car from 0 to 60 mph (97 km/h) in 3.9 seconds and to a top speed of 198 mph (319 km/h). Bigger wheels and tires along with lightweight ceramic brakes were standard.The GT2's fixed rear wing (made of CFRP for the post-2003 cars) appears to be a concession to racing rules that usually outlaw moving aerodynamic devices. It had no rear seat and no air conditioning. Both cars were available only with six-speed manual transmissions.

The Turbo, GT2 and GT3 models use the Aluminum crankcase of the air-cooled 911 with its true dry sump oiling system. The six separate individual Nikasil lined cylinders in this engine are covered with two separately installed water jackets each covering a bank of 3 cylinders on each side of the engine, thus adding water cooling to a crankcase originally designed for air-cooled cylinders (the normal 996 Carrera engine has the cylinders and water jackets cast together with the crankcase). This engine is very similar to that of the Le Mans winning Dauer Porsche 962 and Porsche GT1 racing cars' engines.

The 99 Model year featured a 3.4L engine producing 296 bhp. The 2000 and 2001 model years received a slight increase in horsepower to 300 bhp while retaining the same figures for torque produced. In addition, Porsche made many changes to the 3.4-liter unit over its production lifespan, so the last of the last of these 3.4L engines (made in 2001) have improved reliability.

The 2002+ cars received a 3.6L engine which provided an extra 15 bhp (11 kW) of power (taking output to 315 bhp or 320 ps) and an additional 15 lb.ft of torque (increasing from 258 to 273). The inclusion of Variocam Plus (as opposed to Variocam on the earlier 996) improved power delivery through the rpm range. The headlights on the 996 Carrera also adopted the turbo headlights of the MK1 iteration. Seat belt pretensioners were also added and the Tiptronic in 2000 was modified to allow it to enter manual mode by clicking the steering wheel mounted buttons.

Updates also included an updated front bumper to decrease front end lift and the addition of a glove box. The "MK2" 996 gained 25kg compared to the "MK1" in this facelift.

Porsche offered a special edition of the 996 for the year 2000. The company introduced the car as "The 911 for the Millennium" and based it on the Carrera 4 coupe. Only 911 were made.

This special edition was finished in Violet Chromaflair paint with natural leather interior and dark burr maple trim. Available with a Tiptronic or six-speed manual gearbox, the car was well-equipped. A number plate on the center console and a unique "911" badge on the engine lid and lettering on the door sills make this special edition easy to identify.

Porsche celebrated the 911's 40-year history in 2003, using the slogan, "40 Jahre 911/40 Fast Years". The company also introduced the 996 "40th Anniversary Edition" for model year 2004. This model has the 996 Turbo's front-end, and was available only in Carrera GT Silver exterior paint. Other unique features included: X51 power kit, turbo radiators, limited slip differential, sport suspension, polished 5-spoke alloys (unique to this model), GT3 side skirts, natural gray leather interior (with luggage set to match), sports seats (there was a power comfort seat option), polished exhaust tips, heated seats (option in Latin America), litronic bi-xenon headlights, special dynamic sealed panels, and a special "40 Jahre 911" logo on the back. The power was increased from 316 to 345 hp (257 kW). Only 1,963 units were made, to commemorate 1963—the year the 911 was introduced. 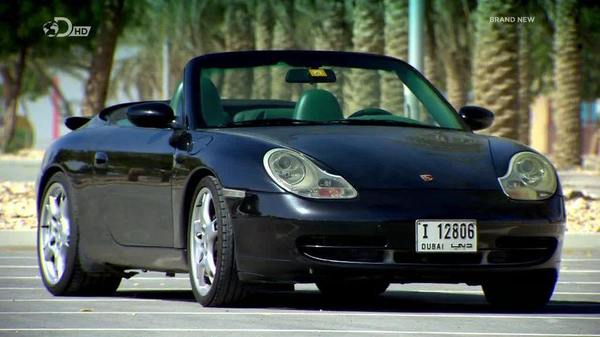