Inspired by the Porsche 356 which was created by Ferry Porsche, and some spyder prototypes built and raced by Walter Glöckler starting in 1951, the factory decided to build a car designed for use in auto racing. The model Porsche 550 Spyder was introduced at the 1953 Paris Auto Show. The 550 was very low to the ground, in order to be efficient for racing. In fact, former German Formula One racer Hans Herrmann drove it under closed railroad crossing gates during the 1954 Mille Miglia.

The 550 / 1500RS or Spyder became known as the "Giant Killer". The later 1956 evolution version of the model, the 550A, which had a lighter and more rigid spaceframe chassis, gave Porsche its first overall win in a major sports car racing event, the 1956 Targa Florio.

Its successor from 1957 onwards, the Porsche 718, commonly known as the RSK was even more successful. The Spyder variations continued through the early 1960s, the RS 60 and RS 61. A descendant of the Porsche 550 is generally considered to be the Porsche Boxster S 550 Spyder; the Spyder name was effectively resurrected with the RS Spyder Le Mans Prototype.

As Dean was finishing up Giant’s filming in September, 1955, he suddenly traded in his 356 Porsche Super Speedster at Competition Motors for a new 1955 Porsche 550 Spyder on September 21st and immediately entered the upcoming Salinas Road Race event scheduled for October 1 and 2.

According to Lee Raskin, Porsche historian, and author of James Dean At Speed, Dean asked custom car painter and pin striper Dean Jeffries to paint Little Bastard on the car: 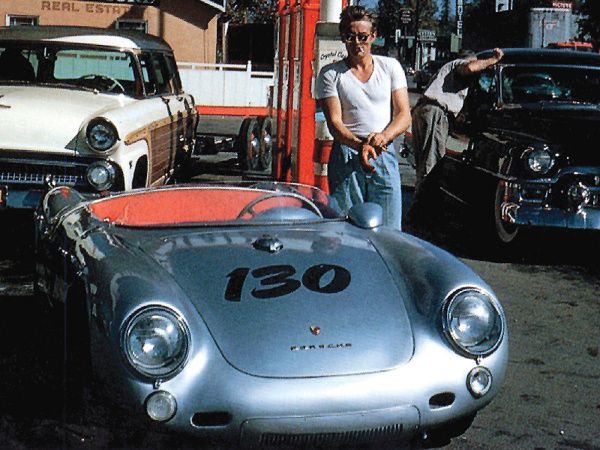 "Dean Jeffries, who had a paint shop next to Barris did the customizing work which consisted of: painting '130' in black non-permanent paint on the front hood, doors and rear deck lid. He also painted "Little Bastard" in script across the rear cowling. The red leather bucket seats and red tail stripes were original. The tail stripes were painted by the Stuttgart factory, which was customary on the Spyders for long distance endurance racing identification."

Purportedly, James Dean had been given the nickname "Little Bastard" by Bill Hickman, a Warner Bros. stunt driver who became friendly with Dean. Previous references to Hickman say he was Dean's dialogue coach on Giant. Bob Hinkle, a Texan, was actually Dean's Giant dialogue coach. Hickman was part of Dean's group driving to the Salinas Road Races on September 30, 1955. Hickman says he called Dean, "little bastard." And Dean called Hickman, "big bastard." Another version of the "Little Bastard" origin has been corroborated by two of Dean's close friends, Lew Bracker, and photographer, Phil Stern. They believe Jack Warner of Warner Bros. had once referred to Dean as a little bastard after Dean refused to vacate his temporary East of Eden trailer on the studio's lot. And Dean wanted to get 'even' with Warner by naming his race car, "Little Bastard" and to show Warner that despite his sports car racing ban during all filming, Dean was going to be racing the "Little Bastard" in between making movies for Warner Bros.

The 550 is among the most frequently reproduced classic automobiles, like the AC Cobra and Lotus Seven. Several companies have sprung up in the last 25 years, some of which build near-exact replicas from the ground up, including spaceframes built to exacting specs from Porsche blueprints. Some of the companies that make replicas are Boulder Speedster, Chuck Beck Motorsports, Chamonix do Brasil, Auto Classics, Thunder Ranch, Holmes Motor Company, Le Mans 550 Spyder, Vintage Spyders, and Alloycars, which specializes in exact aluminum recreations from blueprints.