Polish manufacturer of automobiles from Katowice 1996 to 2011 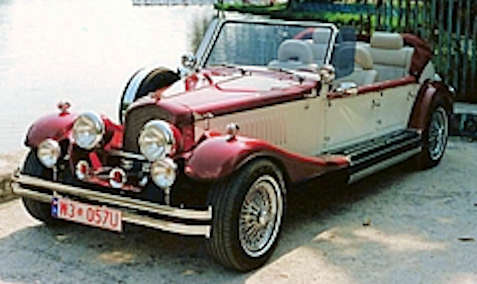 Przedsiębiorstwo Projektowania i Budowy Prototypów J. i J. Kwiatkowski  is a Polish manufacturer of retro style automobiles .The brand name is JAK .

Jerzy Kwiatkowski, who previously worked at Pro-Car Engineering , founded the company in Katowice in 1996 and started producing automobiles in 1997. Various models produced untill around 2011.

The first model Nestor is a further development of the pirate of Pro-Car Engineering. The open two-seater has a body made of aluminum in the style of the 1930 's.  A four-cylinder engine from Fiat , 16-valve 1,800cc engine capacity provides since 2002 for the drive.

1997, the larger model Majestic was presented. The four-door body has room for five people. Production figures are available only until 1999. Until then, about 30 vehicles were created.