Commercial vehicles Lublin,Poland from 1950 to 2007 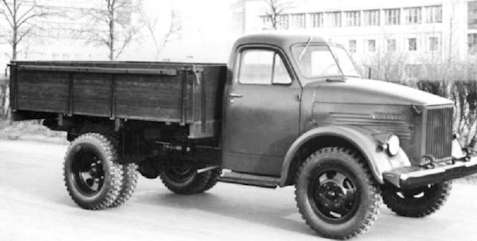 Fabryka Samochodów Ciężarowych w Lublinie (literally: "Lublin Trucks Factory" , FSC Lublin for short ) was from 1950 to 2007 a Polish manufacturer of commercial vehicles, mainly trucks, agricultural and specialty vehicles in Lublin and one of the country's largest motor vehicle manufacturers.

Since 1998, the Honker 4x4 is produced as a successor to the Tarpan, which is also used by the Polish military. FSC is one of several manufacturers who have built different models of Honker . In addition to off-road vehicles, the company also produces vans up to 3.5 tons under the name HONKER Cargo. Today's HONKER 4x4 and HONKER Cargo meet EURO 5 emission standards and are approved throughout the EU.

At the unification party of the Polish Socialist Party (PPS) and the Polish Workers Party (PPR) to the Polish United Workers Party (PVAP) fell in 1948 under pressure from Stalin to push forward the hesitant transformation of the economy and a forced construction of a heavy industry , the resolution adopted by Lilpop , Rau i Loewenstein completed and partially destroyed during the war factory and complete annually about 10,000 engines and other drive, steering and clutch systems for the Polish needs to produce.

The modern production facility for that time was completed under Soviet license. The production started on November 7, 1951 under the control of the Soviet Union, the 34th anniversary of the October Revolution .

Initially, the engines M-20 Pobeda for the manufacturer FSO Warszawa , as well as 2.8-tonne transport vehicles (open flatbed truck with bodywork, model Lublin -51 , license replica of the GAZ-51 ) were produced for taxi operation with diesel engines or wood gasificationwere equipped. At that time there was still a need in Poland for a lack of a functioning public transport system for private shared taxis or public minibus traffic. Manufactured until 1958, 17,840 vehicles with petrol driven in license, then went until July 22, 1952 gradually to manufacture all parts for the construction itself. The construction of further production facilities followed until 1959, when the production of tires and rims was finally started in a new factory building. In 1973, the productive assets were estimated at 3 billion złoty.

After an unsuccessful marketing of the Lublin-51 in the Eastern bloc countries began in 1959, the production of the vehicles of the model series FSC Żuk (2.5 t to 3.5 t). At the time, the key engineers at the Zuk Lublin plant were Stanislaw Tanski and Aloysia Skwarek. They constructed until 1976 vehicles with the engines SV M-20 and OHV S-21 . In the 1960s, they also produced the armored troop transport OT-64 SKOTfor the military. Vehicles of the brand Żuk could successfully be exported abroad, in addition to the socialist countries partly in Arab countries, for example to Egypt. Parts and subassemblies were delivered to production cooperative vehicle plants in Warsaw , Starachowice and Bielsko-Biała . From 1973, agricultural vehicles, including all-terrain vehicles, were produced under license by FSR Tarpan in Poznan. In 1975, the Lublin plant received the Order of Labor from First Secretary of PZPR Edward Gierekfor the "modernization of the national economy" and in the following years awards from a total of five Polish Prime Ministers. However, the plant could not decouple economically from the economic decline of the national economy, and a comprehensive and appropriate renewal of the production facilities could not take place for economic reasons.

In the years since 1993, in-house developed models and in the framework of various joint ventures and other participations the following car models were built: Peugeot In 1993, a joint venture company to be formed with Peugeot, the 1993 to 1995 model Peugeot 405 built (Quantity: 3802 for the Polish market).

After that, the state-owned company was sold to Daewoo .In 1995, the majority of the shares was taken over by the Korean company Daewoo Motor Polska Sp. Z oo , which since then operates under the name Daewoo Motor Polska . Further shares were held by the British company LDV . The models Nexia (until 1998), Musso and Korando (until about 2000 or 2001) were assembled here until 1998 , and in 2001 the company was insolvent. Together with a British design agency work began on the successor of Lublin-III (see vehicles below), from which appeared a prototype LD 100, later presented to the public as LDV Maxus.

In the years 2002 to 2003, the engine manufacturer Andoria SA, today Andoria-Mot Sp. Z oo took over the bankruptcy estate and sold it shortly thereafter to the British-Russian consortium Intrall .

As a direct successor to previous FSC models, the Lublin, Lublin-II and Lublin-III models were produced from October 1993 to 2007 following the Daewoo Motor Polska's acquisition of the plant .

After the collapse of the Polish Daewoo on the Polish market in 2001, the leasing company Andoria Motors took over the plant. The fully developed blueprints of Maxus had to be sold for debt repayment. From 2003 to 2007 the company was called Intrall Poland Sp. Zoo and belonged to the Russian-English group Intrall. The factory was developed by Polish and Russian engineers after being readmitted by the Daewoo Motor Polska in 2003, the prototype was under the brand of Intral Polandpresented in September 2006; Production started in the second quarter of 2007, but only lasted a few weeks. a. for failure to comply with Euro 4 emissions standard and resulting bankruptcy (2007); The manufacturer is currently still looking for new investors.

In 2007, around 500 people worked at FSC. The models Lublin-II and -III were produced. The development continued to be the Zuk Lubo (bus and van), which was not supposed to appear anymore. On October 15, 2007, the district court declared the company INTRALL Poland insolvent.

From the insolvency estate two successor companies could be built up. A company was hived off for auto parts production, which supplied tires and rims for Fiat Auto Poland and other manufacturers. From April 2008, the production of the models Honker and Lublin was prepared.

The current successor company was created in 2008/2009 from the bankruptcy estate of Intrall, when the production site was bought by the Polish company DZT Tymińscy . Since 2012, it has operated under the name of Fabryka Samochodów HONKER Sp. Z oo It has been producing SUVs and vans under Zbigniew Tymiński since then.