Pininfarina Sintesi was a concept car designed by Pininfarina and unveiled in 2008 at Geneva auto show. The name 'Sintesi' means 'synthesis' in the Italian language.

The Pininfarina Sintesi was a four-door, four-seat sports car. The design did not consider the car as a shape that covers the mechanicals, but one that gives a shape to the mechanicals around the passengers. The concept was born from the manufacturer’s need to communicate his way of interpreting the car of the future. With the Sintesi, Pininfarina introduced concepts including "Liquid Packaging" and "Transparent Mobility":

“Our source of inspiration,” said Vermeersch, “was man’s freedom over technology, a car in which technology gives creative freedom back to the designer and allows us to explore new forms and future scenarios. But at the same time, we did not want everything to be limited to a flight of fancy, we wanted our approach to be very concrete. Which is why we combined and tested our ideas with the innovative technologies provided by our partners in this project.”

The Pininfarina Sintesi won the Red Dot Award for 2008, among more than 1900 competitors from 48 countries. This prestigious award ranks among the largest and most renowned design competitions in the world.

The exterior design features large windshield surface and front spoiler. Both the front and rear doors had a verticale opening system. The overall flowing and smooth look of the side view is combined with the sharp edges that characterize the wheels, the front end and the rear end, while the side air intakes and outlets give a sporty touch to an already dynamic design and create an interplay of covex and concave surfaces. 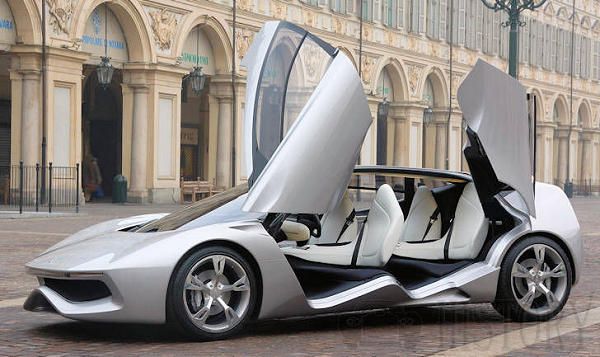 The fuel cell technology was developed in partnership with Nuvera, which developed the Quadrivium Fuel Cells system, the various components of which were distributed around the car, with four fuel cells positioned near to the wheels.

The total output is around 700 hp. The center tunnel integrates a bio-fuel tank and a reformer capable of producing hydrogen. In terms of performances, the Pininfarina Sintesi has a top speed of 115 mph and can scoot from 0 to 60 mph in just 7.5 seconds.

Sintesi was equipped with a wireless system called Clancast, developed by Reicom, which manages all the communications between sensors and the control unit, between the car and passengers and also among different vehicles.