The Peugeot 3008 is a car of the French car manufacturer Peugeot . It is a crossover type vehicle , halfway between a compact minivan and an SUV . Its commercial release took place on April 30, 2009. Its first presentation in the form of concept car named Prologue is carried out at the 2008 Paris Motor Show .

Its manufacture is carried out in the PSA plant in Sochaux ( Franche - Comté ) and in the DPCA factory in Wuhan by DPCA for the Chinese market since the end of 2012.

It has received five out of five stars in the EuroNCAP tests and has the Origine France Garantie label . With a restyling in autumn 2013.

The concept Peugeot Prologue Hymotion4 has a prominent grille with a chrome grille and imposing "almond" headlights. The grille of this Peugeot is also less wide than on previous models. The sides of the vehicle are very little carved, with the exception of the curve of the wings.The interior is totally new with an imposing slightly sloping center console.

By its positioning in the range of PSA , takes the name of 3008:

Throughout the range, the suspension are composed of a pseudo Mac-Pherson front axle and a rear axle with a deformable cross member.

The 3008 equipped with 2  L HDi FAP or 1.6  L THP features the Dynamic Rolling Control system, located on the rear axle. This system tries to reduce the roll without reducing the comfort of damping. With these engines, the hydraulic steering with variable assistance is provided by a higher power electric pump unit (710 watts) for increased comfort and maneuverability. Braking is provided at the front by ventilated discs 302  mm in diameter and 26  mm thick.

The 3008 received five stars under the new EuroNCAP protocol of 2009. It can ship the Peugeot Emergency service, included with the telematics system WIP Com 3D.

The 3008 receives a restyled version presented at the Frankfurt Motor Show in September 2013. This is the 3008 restyled Hybrid4 , with an upgraded engine and new technological equipment. The Hybrid4 version retains a 2.0 HDi of 163  hp , assisted by a 37  hp electric motor that drives the rear wheels.

The 3008 was equipped with ESP and Brake Assist (EBA) as standard. The interior largely corresponded to that of the 5008 and is reminiscent by its construction on the cockpit of an airplane. For an extra charge, a 1.60 m² panoramic glass roof was installed. There was also a head-up display in the 3008 . Also subject to a charge were the intelligent traction control , known as grip control , as well as dynamic roll compensation .

The trunk , which is accessible through a two-part tailgate , holds between 432 and 1604 liters.. In addition, the 3008 had a standard electric parking brake , rain and light sensors . In addition to the standard start-up assistant , various parking aids were available as special equipment.

The 1.6-liter HDi FAP diesel was offered in addition to a manual 6-speed transmission with an automated transmission . This EGS6 allows the elimination of the clutch pedal and offers a favorable alternative to the classic automatic transmissions with its two modes "manual" or "automatic", In manual mode, the gear change takes place by operating the gear lever or by rocking behind the steering wheel. In automated mode, this transmission, thanks to its electronic management optimized for the changeover torque, allows a reduction in fuel consumption compared to traditional manual transmissions. The 1.6-liter diesel thus achieves a consumption value of 4.9 l / 100 km in the mixed cycle, which corresponds to a CO 2 emission of 130 g / km. As of March 2010, there was also a 2.0-liter model with automatic transmission and 110 kW power.

The 3008's offer includes six powertrains consisting of two gasoline engines, and three HDi FAP diesel engines. All four-cylinder engines have a cylinder head with two overhead camshafts and 16 valves. According to the manufacturer the 3008 1.6 liter HDi FAP 80  kW (110 hp) BMP6 consumes in the combined cycle, 4.9 l / 100 km or 130  g / km of CO 2.

This engine, which met right out to Euro 5 , is a deep evolution of the "DW10B", the 2.0 HDi of 136  hp (100  kW ), known on other models. Thus, the cylinder head, the mobile hitch (connecting rods and pistons), the intake, the exhaust, the distribution, the crankcase have been completely redesigned. To achieve this performance, this engine also includes a variable geometry turbocharger, an electronically controlled high pressure pump (allowing a maximum pressure of 2,000  bar in the common rail according to the load required) or eight-hole solenoid injectors.

This 2.0 HDi FAP is offered with a six-speed manual or automatic gearbox. This sequential automatic "Porsche Tiptronic system" completes the 3008's diesel offer.

Delivering a maximum power of 110  hp (80  kW ) at 4,000  rpm , this HDI of 1,560  cm 3 , equipped with the particulate filter, it is characterized by a maximum torque of 240  Nm from 1,750  rpm (or even 260  Nm thanks to the overboost ). These features are achieved by technologies such as a variable geometry turbocharger and a high pressure direct injection system (up to 1,600 bar). This unit is mated with two new six-speed manual or robotic gearboxes introduced in 2008. The "MCM" is a manual gearbox.

The "robotic" version of this one, the BMP6, allows the removal of the clutch pedal, and is thus an economical alternative to conventional automatic gearboxes with its two modes: manual or automatic. It allows to change gear at any time by acting on the gear lever or on the paddles behind the steering wheel. It is a robotic box with a single clutch.

In automated mode, the electronically controlled gearbox allows, thanks to its electronic management optimizing the moment of shifting, a consumption gain compared to a conventional manual gearbox. Finally, according to the manufacturer, this engine consumes, associated with this BMP6, 4.9 l / 100  km in mixed cycle or 130  g / km of CO 2.

It is available in both manual and automatic transmission, both with six gears.

In addition to the Variable Valve Timing (VVT) system on intake and exhaust camshafts, a Variable Valve Lift System (based on BMW Group Valvetronic technology ) allows you to gradually adjust their maximum stroke depending on the pedal action. The combination of the two VVTs combined with the variable lift system of the intake valves makes it possible to improve the thermodynamic efficiency of a gasoline engine, significantly lowering its consumption (especially in the partial load phases), and therefore CO 2, and ensuring a more spontaneous response for greater engine flexibility. [ref. necessary]

The 3008 is the first car of the PSA group to be equipped with a diesel hybrid engine . The Peugeot 3008 HYbrid4 . It is equipped with a NiMH battery , a 37 kW electric motor  operating exclusively the rear wheels and weighs 1,660  kg . PSA plans to sell in Europe 33,000 units per year of 3008 equipped with this technology.

With this BMP6, the driver can, at any time, choose between two driving modes, sequential or automated:

The initial goal is to optimize the driveability and fuel efficiency of the vehicle. The calculator must prevent over-revving or under-revving situations in order to propose economic behavior. According to the manufacturer, over 3008, this optimized management allows, in mixed cycle, a consumption gain of more than 5% compared to the six-speed manual gearbox. Even when this automatic mode is active, the driver can regain control by operating one of the paddles on the steering wheel.

The BMP6 has a typing "Sport" activated via the key "S" located on the grid of the shifter. Therefore, the computer uses the fastest pass laws, including selecting speeds at engine speeds higher than normal mode. However, this transmission has only one clutch, against two on the DSG system of Volkswagen (s-tronic at Audi).

The 3008 produced since the end of 2012 in China differs slightly from the European version at the calender, the quarter window and its length (4.43  m ). It offers only gasoline engines, including 2  L .

This specific version takes advantage of a restyling unveiled at Beijing April 25, 2016. The developments include a new, more vertical chrome grille, similar to the one on the new 2008 restyled Peugeot , a new rear light signature and new driving aids, such as 360 ° vision and anti-theft alert. -collision . 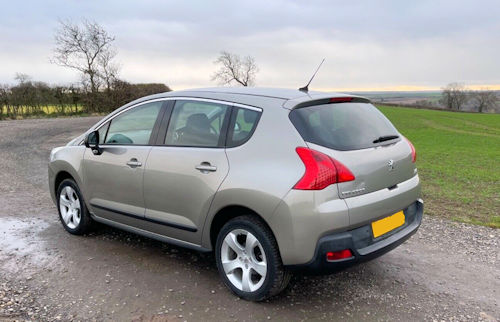