The Peugeot 604 is a car model of the Peugeot manufacturer . Produced between 1975 and 1985 .The design of the body is from Pininfarina , in collaboration with Paul Bracq.

The car was presented at the Geneva Motor Show in March 1975. Spacious and luxurious sedan, the 604 is very noticed and immediately arouses flattering comments.For its first line, which, without being innovative or extravagant, seduced the public by its simplicity and style with taut lines, meeting the criteria of the time.

The 604 was not a commercial success. We can even speak of failure. Contemporary journalists have attributed this to various reasons, including a lack of ambition (the doors and the center section were taken from the 504 to reduce costs), a lack of technical innovation, modest execution, and poor reputation because of rust problems.

Above all, it is the dimensions that speak: a width of 1.77  m , a length of 4.72  m and a height of 1.43  m . A sober and classic style. An imposing front, with its separate projectors, chrome and a general silhouette reminiscent of the Mercedes. The equipment is standard, but with a perfectible finish. It has four power windows with dashboard locking and power steering . The dashboard has 3 large dials and its nice design is in good taste. In terms of options, the 604 had a leather upholstery, an automatic transmission, an electric sunroof and air conditioning. 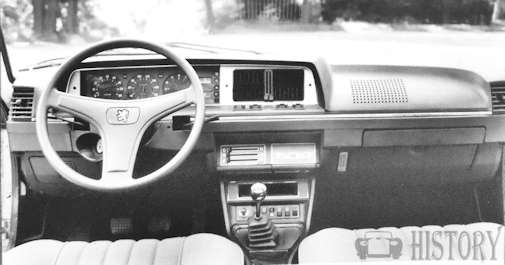 On the engine side, the 604 uses the V6 PRV engine , designed by the Franco-Swedish company (Peugeot Renault Volvo).Initially, PRV had to release 2 engine versions a V8 and the V6 that we know. The economic climate (the end of the Glorious Thirties and the oil crisis ) led to the abolition of the V8.This gave birth to a V6 all-alloy 90 ° with a displacement of 2644  cm 3 , developing 136 horses.

This was equipped in the Volvo 264 , the Renault 30 TS and also the Peugeot 504 Coupé and V6 Convertible. Peugeot (and Renault ) chose to use carburetors, unlike Volvo, which opted for injection. This engine lacked flexibility at low revs, clumsy for a V6 engine and fuel-hungry, enormously in version with two carburetors. Later, Peugeot will opt for Bosch injection versions , more efficient and a little more economical than carburetors.

The 604 was in the traditional format of the time: front engine, rear-wheel drive and single-disc clutch. An automatic gearbox (manufactured by GM) was offered as an option, erasing the lack of flexibility of the V6 PRV, which was described as rough due to its lack of flexibility at low revs. Reliability problems led Peugeot to replace it with a ZF model.

The ground link is of good quality: four independent wheels, a MacPherson front suspension and rear arm trailed. Coil springs and telescopic shock absorbers. For the time, she is described as excellent.

The hydraulically assisted rack-and-pinion steering is smooth and precise, offering good maneuverability.Braking is efficient and provided by four disc brakes, two of which are ventilated at the front.

The dimensions of the 604 offer a pleasant onboard life. The driving position is pleasant and the habitability is good. The rear seats are very accessible and the place reserved for the legs is important.The comfort is at the rendezvous, firstly thanks to the suspensions and their capacity of absorption of the irregularities of the road. Then, by the softness of the upholstery. The trunk offers a generous capacity.

The Peugeot 604 marks the return of the French manufacturer on the market of road sedans. The car was manufactured in Sochaux , France. But in 1979 and 1981, Kia took over by assembling 381 cars from collections of CKD spare parts produced in France.Sold from 1979 to 1984 in the USA (only Diesel Turbo from 1980) but only 306 in total sold.The Peugeot 604 was produced under license in South Korea by Kia between 1979 and 1981 to 381 copies

This three-year wait is partly filled by the launch of the 505 V6, also equipped with the V8 of 2 849  cm 3 , but with a crankshaft with staggered crank pins and an electronic injection system, this model develops 170 horses.