The Peugeot 404 is a car of the French car manufacturer Peugeot , produced from May 10, 1960 . Later in May 1962, the first French sedan series (as the first coupe / convertible) equipped with an injection engine .Built October 1975 , with the exception of the van which was marketed in France until 1979 . Production continued for several years abroad: the last 404 were utilities assembled as late as 1989  at the Mombassa plant in Kenya .

When in 1955, the Sochaux company presents the 403 , shortly after, Citroën launches the DS . The traditional clientele did not really succumb to the hydraulic suspension, especially since the first technical problems quickly appeared, but the management board of Peugeot reacted very quickly, something very unusual for the manufacturer. By the end of 1955, the decision to urgently launch the study of the replacement of 403 was taken; it would be called 404.

A first project with a V8 engine and a hydraulic suspension is envisaged but very quickly abandoned. The competitor's setbacks precipitated this decision. In the middle of the Suez war, Peugeot is betting on a traditional family sedan, but with a modern appearance. Very satisfied with his first collaboration with the Italian bodybuilder Pininfarina who was the author of the 403, the direction of Peugeot entrusted him the study of the 404 but with a constraint of weight, the reduction of the study time, with the possibility to find, in the boxes of the master in design, a project already ready. Pininfarina proposed the study for Fiat (which will give the Fiat 1800/2100 ) and for the British Austin. After some technical changes to make these two manufacturers accept that Peugeot sells a similar body, the 404 is designed in just 3 months. The production of the Peugeot 404 is launched on May 10, 1960

The engine was very similar to that of the 403 (cast iron engine block, 4 in-line cylinders, three bearings, Alpax light-alloy cylinder head ) but whose displacement was increased to 1.6  liters by increasing the bore by 4  mm , and especially by tilting this block at 45 ° ("lying" on the right). The power obtained was then 65  ch DIN . In 1963, in order to provide the coupe / cabriolet and sedan high-performance road, this power unit (with a volumetric ratio increased to 8.8) will be equipped with the injection (indirect) carrying the power to 80  ch DIN .

The 404 was made in several variants of bodies:sedan and station wagon (5 seats, 7 seater or commercial),coupe, convertible and van.

It has been equipped with different engines: carburettor , fuel injection or diesel . By winning the East African Safari Rally several times thanks to its robustness, the 404 has contributed to the brand's reputation and not only on the African continent. like the previous Peugeot 203 and 403 , a rigid rear axle propulsion and shift lever at the steering wheel, it now adopts helical springs suspension springs (spiral springs) in place of the traditional transverse spring blade since 201 .

The elegant and straightforward style of the 404, designed by Pininfarina , opposes the curves of the massive 403 , inspired by those of Austin A55 Cambridge / Morris Oxford and Fiat 1800/2100  of 1959 , also designed by Pininfarina . The body of the 404 incorporates the latest style elements in vogue in the United States  : the panoramic windshield (with return to the sides) and rear spoiler, both treated with great sobriety by the Italian designer. The side windows are still flat (they will only bulge on the 504) and the total glazed area is favored thanks to the thin flat surrounds of the windows (which will be found on all future Peugeot up to the 305 ) and thanks to the removal of the front door baffles advantageously replaced by new side vents cut off on both sides of the dashboard. Interior fittings will be regularly reviewed to significantly improve safety.The first models are recognizable by chrome window surrounds and rims painted in unison with the bodywork. Like other cars of this period, the bumpers of stainless bumper will be garnished later with rubber. The gas hatch is cleverly concealed behind the rear font plate. The equipment differs according to mode and variants: the first commercial is spent washing washer while the last cabriolets receive leather upholstery, additional projectors.

The new Peugeot 404 was presented to the automotive press, May 9, 1960, it praises its suspension comfort and handling. It will be more severe on braking consisting of four economic drums , moreover, without assistance, which is common at the time. Peugeot will fall asleep criticism with assisted drums called thermostable 1964 (still optional at first) with matching perforated rims. These brakes are very effective (2 master cylinders with a ratio of assistance of 7 for 3 to 4 currently) but a picky maintenance, they will eventually be replaced (with a lower assistance) in 1968 only, by disc front brakesalready used by most manufacturers. On the other hand, the innovation already started with the 403 to market a diesel engine Indenor , widely used as a taxi , will never qualify for braking improvements.

The Peugeot 404 was assembled locally in CKD on the chains of the Berazategui factory from 1962. That year, 2 071 copies were produced as well as 6 734 Peugeot 403 . A year later, the family version made its appearance but the production is interrupted in September 1964 as a result of malpractices in the importation of French components that lead to the dissolution of the company IAFA.

In 1965, SAFRAR took over the factory and obtained a license for local production and no longer the assembly of Peugeot models. In 1972, the diesel engine is offered with the 404 D model.

As a result of legal regulation problems, the pickup version was discontinued in 1978, its manufacture will resume in 1980 with a larger loading platform. In 1980, with the absorption of SAFRAR by Sevel Argentina , the production of the 404 range was definitively stopped in Argentina. The 404 is still also very present in Ethiopia . Due to its robustness, many taxis still use it  . 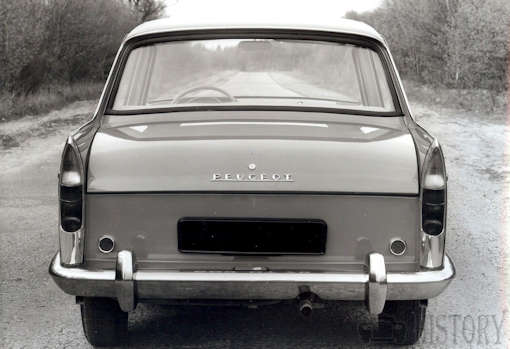