The Peugeot 203 , appeared in 1948 , is a passenger car developed by the French manufacturer Peugeot . Quickly available in several versions (convertible, coupé, or utilities) , while France recovered from the war . Unique model marketed by Peugeot until 1954 , the 203 is the symbol of the rebirth of the firm of Sochaux .

At the end of the Second World War , the French car industry is in ruins, like its factories. The Sochaux company dreamed of being able to compete with the Citroën 15 Six , by proposing a car equipped with a V8 engine , a sort of 22 CV in the Peugeot fashion. The 802 project, which began in 1940 , is finally abandoned because it is doomed to fail because of restrictions and shortages in the post-war market. It is therefore decided to start from scratch and to propose a less ambitious and more realistic project. The specificationsof the new Peugeot is a 10 HP car, as powerful as a pre-war 11 to 14 HP, with a comfort superior to the previous standards. A prominent place must be given to safety with better handling and, especially, effective and reinforced braking. The previous 402 has a bad reputation in this area. At the same time, it is decided to design a complete range around a single model, available in several versions, for lack of means. Many builders are content to put back into production, modernizing or not, an existing model before the war. The bold and wise bet of Peugeot, with the 203, is the happiness of the brand and its faithful.

Peugeot presents to the press and dealers, in October 1947, the "203". The official presentation to the general public takes place in Paris at the 1948 Salon . Its manufacture begins a few weeks later and ends 12 years later in February 1960 . The factory is organized for a daily production of 300 vehicles, but the limitation of the allocations of the raw materials only allows to reach 100 units daily, and 200 vehicles a day, at the beginning of 1950  . In total, more than 685,000 copies, all versions, come out of the Peugeot chains.

With its small American look, the 203 has a very successful line. Its bodyshell shape and fast-back stern evoke, in particular, the seductive American interior lines of Chrysler automobiles (most notably the 1941 Chrysler LeBaron Custom Town Limousine ). It adopts a more classic line than that of the generation 202 which, in the 1930s , was inspired by the Chrysler Airflow .

The general line of 203 hardly changes during the 12 years of production. Only a few aesthetic details distinguish the different vintages, while the front doors open towards the rear until the end of the car's career.

Sober and stripped, the cabin offers a fairly rustic comfort; however, it benefits from efficient heating. The dashboard is redesigned for 1952, after the front seats lost, in 1950 , their tubular back, dangerous enough for children sitting in the back. The 203 is the first mass-produced French car equipped with sleeper seats. 98% of 203 sedans are equipped with the standard sunroof. With a larger glazed area than previous models, the 203 is considered clear and bright compared to the production of the time, including the dark Traction Avant .

Thanks to its cylinder head in Alpax , which allows good heat exchange and almost always allows to drive at maximum engine speed, the results obtained by the preparers prove that the 203 remains well below the multiple possibilities of its engine  .This engine continues its career in version 54  hp until 1966 , on the 403-7 with 201 705 additional copies  .

The gearbox does not deserve the engine's praise. Peugeot has difficulties to equip his 203 with a correct box. . The second speed is too short and, in order to lower the engine speed for the sake of saving gas, the design office is choosing a fourth overdrive. The box and the engine gain in life, but lose, especially in nervousness. To this can be added the mediocre handling (nowadays) of the steering wheel lever and the weakness of gear synchronization (brought back into the context of the time) resulting in crunches (defect corrected in 1955 with the adoption of the C2 box). the future 403 ).

Tourism: Versions tourism of 203 ( sedan , hatchback discoverable, convertible and cut ) are set on 2.58  m of wheelbase , with a rear suspension coil springs, first under the designation "203", then under "203 C" (September 1954, gearbox fully synchronized).

Discoverable saloon: A year after the debut of the 203, the discoverable convertible type  sedan was born at the Paris Salon of 1949. Marketed in Luxury finish, it has leather seats , fromSeptember 1950. Elegant, the car does not have less a short career, which ends at the end of 1954 , while the convertible remains in the catalog until 1956. In spite of this early end, the 203 remains nonetheless the most diffused French discoverable sedans, with a production of 11,514 copies . In the absence of discoverable version of the Aronde , the 203 is without real competition in its category. In addition, it is offered at a reasonable price which, at its launch.

Cabriolet: The 203 cabriolet was presented at the Paris Salon of 1951. This cabriolet has a superior equipment, including a leather upholstery, three colors (black, blue or red). In October 1954, it takes the name of Grand Luxe, a title justified by a still improved finish. The grille incorporates fog lights, while the wings are decorated with chrome hooves. Various layouts complete the presentation: special steering wheel, electric watch, double sunshade, whitewall tires, etc. Finally, the 203 convertible is built to 2,567 copies until 1956 , where it gives way to his counterpart in the range 403 .

Coupe: A year after the appearance of the convertible, that is to the salon of 1952 , is launched the coupe, which completes to complete the range 203. Unfortunately, its line is not very successful due to the lack of a pavilion rather awkwardly drawn, too high and too short. Welcomed fresh by customers, it does not meet the expectations of Peugeot and disappears from the catalog in 1954. This is the least produced version of the 203 range, with only 953 copies  .

Family: Semi-elliptical bars are adopted as a solution for the suspension, to release the floor of the utility versions. Production is stopped in 1956.

Utility: The long version (wheelbase of 2.78  m ) is reserved for utilities. It is suspended from the rear by semi-elliptical springs for the commercial, light truck, van, panel vans , ambulance and tray-cab versions . Just over 157,000 utilities are produced.

203 R: In 1950, Peugeot studied a Jeep based on the 203. The French army has chosen the Delahaye VLR , this project has no follow. In 1956, Peugeot presents a new version, without more success.

Darl'mat: One of the first transformations of 203 (and one of the most widespread also) was the work of Emile Darl'mat , Peugeot dealer in Paris. He has already realized the brilliant "  402 Darl'mat" and one can imagine that he works with the tacit agreement of the factory. The "203 Darl'mat" (250 copies produced between 1949 and 1954)is derived from the standard sedan. It is lower by fourteen centimeters, thanks to a lowering of the front rails which brings a modification of the suspension, and benefits from a total overhaul of the entire upper part of the body. It is not only a very nice car, because its mechanics has also undergone a profound change: feeding by two carburetors, increase of the volumetric ratio and four separate tubes for the exhaust . The engine develops a little more than 50  actual hp and the car is approaching the 140  km / h chrono in client version  .Darl'mat also transforms some cabriolets, less aesthetically successful, and also studies five plastic coupes (1951) and an aluminum sports coupe (1953), still based on 203 .

Constantine: Builder of the famous compressor bearing his name (more precisely, a booster or compressor at low pressure), Constantin specializes in the inflation of production cars and makes sports derivatives of the 203 from 1951. Extrapolated from the sedan, his coach (made at Darl'mat), lowered by six inches, is built on a reinforced platform. With a displacement of 1,425  cm 3 ( bore 79), the 203 Constantin gives 90  hp at 5,000 revolutions (twice as much as the original model) and rolls at 160  km / h  . But when the compressor is blowing, the gas pump pumps much more, resulting in consumption that can go up to 25 liters to the hundred kilometers . 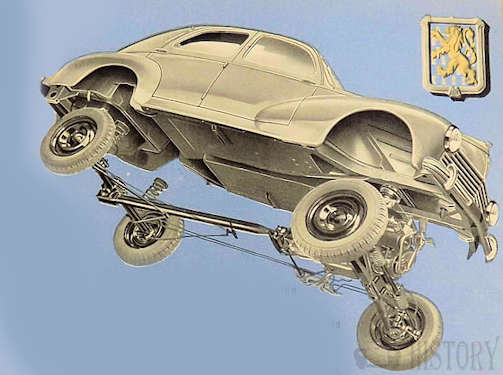