The 104 is a small French car built by Peugeot in Mulhouse .It was first launched in a four-door, two-door sedan and then in three-door coupe. This one knew sports declensions. The 104 served as a base for Citroën LN / LNA, Citroën Visa and Talbot Samba . In 1972 , the sedan is the shortest 4-door in the world. the small car 104, only 3.62 m long, was presented. Paolo Martin had designed the body shape. Originally, the car was only available as a four-door hatchback sedan with a small trunk lid. In August 1973 a slightly shorter three-door coupe variant with a smaller wheelbase than 104 Z was added. The coupé was also available with Citroën air-cooled boxer engines as Citroën LN and LNA.

In the 104 also had a newly developed four-cylinder - aluminum - engine Premiere, in which Peugeot adopted many features from the drive of the larger model 204. The 104 had on the one hand a very complex and modern engine with an aluminum engine block, V-shaped hanging valves and chain-driven overhead camshaft, but on the other hand it did not follow the construction established by Saab with the gearbox on the side next to the engine, but the outdated design philosophy with the gearbox under the engine and a common oil supply for the transmission and engine. In order to save on the overall height, the drive block was installed at an angle of 72 degrees so that the spare wheel could still be accommodated in the engine compartment. The engine developed an output of 33 kW (45 hp) from 954 cm³, the version with 1124 cm³ an output of 39 kW (53 hp).

As part of the facelift in July 1976, the four-door car was also available as a five-door car with a large tailgate for an additional charge

In 1975 Peugeot developed a four-door notchback sedan , a four-door station wagon , a closed delivery van and a pickup to complement the series . However, these variants did not go beyond the prototype status and were only used occasionally in-house in factory traffic.

Studies such as the Roadster Pininfarina Peugette and the EVS security vehicle were also based on the 104 series. 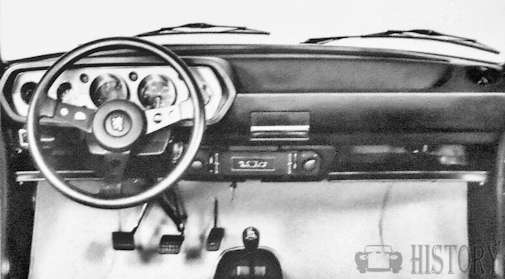 Same engine as the sedan.