The Peugeot 504 is a large family car manufactured by French automaker Peugeot between 1968 and 1983, with licensed production continuing until 2006.

Peugeot's flagship, the 504 made its public debut on 12 September 1968 at the Paris Salon. The press launch which had been scheduled for June 1968 was at the last minute deferred by three months, and production got off to a similarly delayed start because of the political and industrial disruption which exploded across France in May 1968.

The 504 was European Car of the Year in 1969, praised for its styling, quality, chassis, ride, visibility, strong engine and refinement.

The 504 Injection two-door coupé and two-door cabriolet were introduced at the Salon de Geneva in March 1969. The engine produced the same 97 bhp (72 kW; 98 PS) of output as in the fuel-injected saloon, but the final drive ratio was slightly revised to give a slightly higher road speed of 20.6 mph (33.2 km/h) at 1,000 rpm.

In September 1970 an estate was added, featuring a higher rear roof, lengthened wheel base and solid rear axle with four coil springs. It was joined by the 7-seat "Familiale", which had all its occupants facing forward in three rows of seats.

At the 1974 October Motor Show Peugeot presented a more powerful engine for the 504 coupé and cabriolet, now fitted with a 2664 cc V6 unit developed in collaboration with Volvo and Renault. This was the same engine that would be used for the 604 berline, to be introduced at Geneva five months later, in March 1975. The engine incorporated various innovative features such as an aluminium cylinder block, and a fuel-feed system that employed carburetors of differing type, one (type 34 TBIA) featuring a single chamber controlled directly according to the movement of the accelerator pedal, and the second being a twin chamber carburetor (type 35 CEEI) designed to operate simultaneously with the first, using a pneumatic linkage. Maximum output for the 504 coupé and cabriolet fitted with this new V6 engine was given as 136 bhp (101 kW; 138 PS), supporting a top speed of 186 km/h (115 mph).During 1975, the first full year of production, 2,643 of these 6 cylinder 504 coupés and cabriolet were produced, which was considered a respectable number, although dwarfed by the 236,733 4 cylinder 504 "berlines" (saloons/sedans) and "breaks" (estates/station wagons) produced by Peugeot in France in the same year. Following launch of the six cylinder cars, the four cylinder versions of the coupé and cabriolet 504s were delisted: they returned to the showrooms in 1978 in response, it was reported, to customer demand.

At the Paris Motor Show of October 1976 the option of an enlarged diesel engine was introduced. The stroke of 83 mm (3.3 in) remained the same as that of the existing 2,112 cc diesel motor, but for the larger engine the bore was increased to 94 mm (3.7 in), giving an overall 2,304 cc along with an increase in claimed power output from 65 bhp (48 kW; 66 PS) to 70 bhp (52 kW; 71 PS). The 2,112 cc diesel engine would also find its way into the Ford Granada since Ford did not at the time produce a sufficient volume of diesel sedans in this class to justify the development of their own diesel engine.

More than three million 504s were produced in Europe, ending in 1983. Manufacturing continued in Nigeria and Kenya until 2006, utilising the Peugeot knock down kits. Kenya production was 27,000 units and the car remained on sale to 2007, being described as "King of the African road". Egypt also had its own production facilities.

The car was assembled in various countries, under license of Peugeot. In Australia it was assembled by Peugeot's arch-rival Renault, and sold through Renault Australia's dealer network.

The Peugeot 504 is also one of the most common vehicles employed as a bush taxi in Africa. In China, the 504 was produced until 2009 in pickup form, with a four-door crew cab combination fitted, on an extended estate platform. These were built by Guangzhou Peugeot Automobile Company.

The Peugeot 504 was also produced in Argentina until 1999 by Sevel in El Palomar near Buenos Aires, in sedan, estate and pickup forms. The pickup was manufactured in single and double cab with payload of over 1 tonne (1.300 kg ) from 1983-1997, and exported mainly to bordering countries. In 1991 the later models were slightly restyled at the front and rear, with the lamps and bumpers changing design. These cars were also given a new interior. Argentinian 504s offered the 1,971 cc petrol four-cylinder, or the 2,304 cc diesel.

Its engines and suspension were used in later models of the Paykan, the Iranian version of the Hillman Hunter. 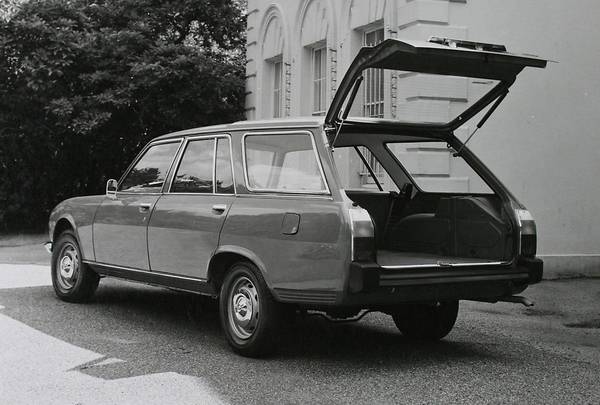 The car was rear-wheel drive, with longitudinally mounted engines, canted over to bring a lower bonnet line to the styling. Manual or Automatic transmission was offered. The suspension system consisted of MacPherson struts and coil springs at the front and with either semi-trailing arms with coil springs or coil springs and live axle at the rear. The station wagon and pickup versions were available with a live axle. The car used disc brakes at the front, and either disc brakes or drum brakes at the rear, depending on the model. The steering was a rack and pinion system. Huge suspension travel, and great strength, meant that the 504 was suited to rough road conditions, and the car proved extremely reliable in conditions found in Africa, Asia, Australia and the like.

There were two petrol engines available in Europe, a 1796 cc and 1971 cc. The latter was also available with Kugelfischer mechanical fuel injection, first available on the earlier Peugeot 404. Gearboxes were either the BA7, four-speed manual or ZF three-speed automatic. Later pickup trucks in Europe gained a fifth gear. Export market vehicles had different variations available.

In 1976, the Government of Sri Lanka purchased a large number of Peugeot 504s for use of dignitaries attending the 5th Non Aligned Movement summit in Colombo.

In November 2010. Iranian state television announced Iranian President Mahmoud Ahmadinejad was to auction off his 1977 Peugeot 504 to raise money for charity. The car is white with a sky-blue interior, and has covered only 37,000 km since new. The political significance of the car being a 504 is that it was used as a working-class status symbol to draw electoral support from the less well-off during the 2005 presidential campaign. The money earned from the sale at international auction is to be donated to the Mehr housing project, a network of cooperatives that provides affordable housing for low-income families.

Soon after being put on auction in January 2011, a bid of $1 million was received from "an Arab country". When the auction closed in March 2011, the final bid was $2.5 million.

Peugeot 504 in For Your Eyes Only James Bond.

Two Peugeot 504s featured in For Your Eyes Only, used by Hector Gonzales' henchmen to chase Bond and Melina driving with Citroën 2CV.