The Peugeot 205 is a supermini produced by the French car manufacturer Peugeot between 1983 and 1998.

The styling of the 205 is often thought to be a Pininfarina design, however Gerard Welter claims it as an in-house; Pininfarina only styled the Cabriolet. It is often credited as the car which turned Peugeot's fortunes around. Before the 205, Peugeot was considered the most conservative of France's "big three" car manufacturers, producing large saloons such as the 504 and 505. The genesis of the 205 lay within Peugeot's takeover in 1978 of Simca, which had the necessary expertise in making small cars. Early 205s used the "Douvrin" engine from the older Peugeot 104, although these were later (1987-1988) replaced with the newer XU and TU-series engines, which were of PSA design. Engines ranged from 954 cc to 1905 cc engine displacement, in carburetor or fuel injected petrol and diesel versions. Its use of the now standard PSA Peugeot Citroën suspension layout of Macpherson struts at the front, with torsion bar suspension rear suspension, that debuted in the Peugeot 305 estate, was a key ingredient of the success of the 205. This is fully independent using torsion bars (Torsion spring) and trailing arms. It is very compact and was designed to minimise suspension intrusion into the boot, giving a wide flat loadspace, while providing excellent ride and handling.

It was launched on 24 February 1983.Shortly after its launch, it was narrowly pipped to the European Car of the Year award by the similar sized Fiat Uno, but ultimately (according to the award organizers) it would enjoy a better image and a longer high market demand than its Italian competitor.

There were also various versions intended for commercial use, such as the two-seater XA-series. There was also the "205 Multi", a tall-bodied special version on XA or XE-basis built by independent coachbuilders like Gruau and Durisotti. Gruau called their XA-based two-seater version the "VU", while the five-seat XE-based version was called the "VP". Durisotti began building the 205 Multi in 1986; it was called the "205 Multi New Look".

The DTurbo and the end of an era

In 1991, the 205 DTurbo was launched with a powerful, turbocharged version of the 1769cc diesel  engine. This was considered to be the diesel equivalent of the GTi models. The 205 was an instant hit, and the styling parameters that it set were echoed in every Peugeot model that was to follow. The exterior styling was never face lifted or significantly altered in its 15-year production run. There was a dashboard redesign for the 1988 model year, and in late 1990 the 205 received new door design and cards, clear front indicators, new 'smoked' rear light clusters, single point petrol injection and catalytic converters were introduced, to meet the new 1992 pollution limits.

The Peugeot 205 was discontinued in the UK in 1996, 205s have been known to be registered as late as August 1996 putting them on a "P" plate, late 205 models are easily found registered in 1995 which puts them on an "N" plate both models are generally found sporting the "Style" or "Forever" brandings with decals on the doors and wings with a "205" decal on both doors. It is believed that the 1996 model 205s are most commonly found in two colours consisting of either Red or a Metallic Blue/Grey, the metallic colour more seldom seen than the Red - but both cars on a "P" plate are quite rare. The single biggest visual difference between very late 205s (1993 on) and earlier ones, is the deletion of the black louvred plastic panel between the rear lights on the tailgate. It is just painted body colour.

In Continental Europe, 205 production was gradually slowed down following the introduction of the joint replacement models, the 106, and 306. The Peugeot 205 was still offered in the "Sacré Numéro" and "Génération" models until the end of the production in 1999, the last models were GLD 1.7 configuration and were sold in Argentina .  Due to the pressure from the market, the company finally built a direct replacement in the 206, which was launched in 1998. 5,278,050 Peugeot 205s have been sold, and a large percentage of them are still in circulation as of 2009. As of March 2013, there are now fewer than 14,000 on the road in the UK, compared to the peak high of 374,773 as of December 1994.

Five-door versions were badged GL (Note: The 1.0 GL was not offered in the UK). The 1.8 GLD diesel model was popular, and What Car? magazine recommended it as a Used Car Buy in August 1992. It was also a Which? magazine best buy for five years running in the late 1980s and early 1990s. It was, (and is as a used buy), a better car than the 106 diesel that replaced it.

From 1994, the X/G trim scheme was replaced by Mardi Gras, Colorline, Forever and Accent. 'GT' versions were now offered only in Continental Europe with a 1.6-litre engine; the UK models were badged Mardi Gras. However, GTI versions continued unchanged. 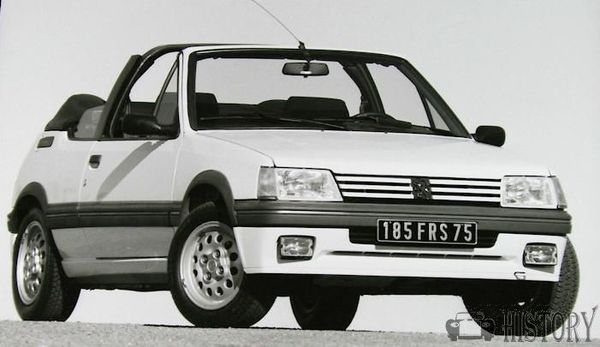 The 205 is still mentioned to this day in group car tests of the newest GTI models or equivalent. Peugeot itself has never truly recreated this success in future GTI models, although came very close with the highly regarded GTI-6 variant of the Peugeot 306. A cabriolet version of the 205, known as the CJ (or CT in France), was designed and partially assembled by Pininfarina of Italy. A CTi version, with the same plastic arches and wheels as the 1.6 GTI was also available. Some later models incorporated the catalysed 1.9 engine. 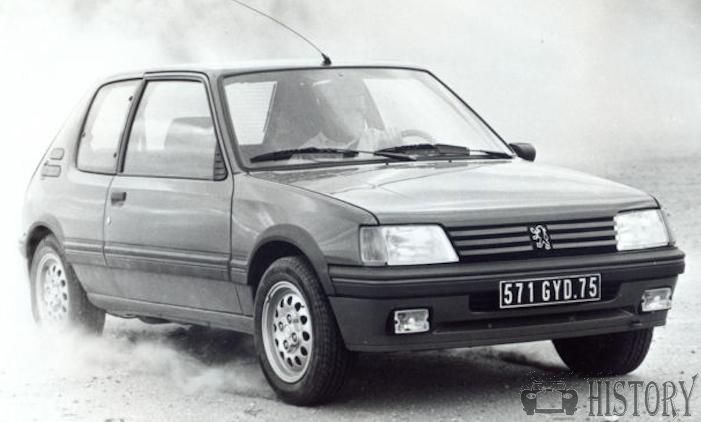 The main aesthetic difference between the GTI/CTi versions and other 205 models were the plastic wheel arches and trim, beefier front and rear bumper valances. The shell also underwent some minor changes, including larger wheel arches (to suit the larger wheels on the GTI and CTi), and the suspension was redesigned and sat lower on the GTI with stiffer springs, different wishbones and a drop-linked anti-roll bar.

With the early success of the 205 GTI in Europe, Motor Trend reported in 1984 that Peugeot was seriously considering adding it to its US lineup, even though Peugeot had a more upmarket image in the United States. Nothing ever came of such rumours, however, and any talk of Peugeot expanding its presence in US became moot when it was forced to pull out in 1991.

Sales of the GTI in the early 1990s were badly hit by soaring insurance premiums,brought about by high theft and 'joyriding' of cars of this sort. Increasingly stringent emissions regulations meant the 1.6GTI went out of production in 1992, while the 1.9 was sold for a couple more years thanks to re-engineering of the engine to enable it to work properly with a catalytic converter, which dropped power to 122 bhp (91 kW; 124 PS).

In 1990, 1200 GTIs were made in the then new colours of Miami blue and Sorrento Green (a very dark metallic green). The cars were made in an equal mix of 300 blue 1.6, 300 green 1.6, 300 blue 1.9 and 300 green 1.9. The cars had power steering and full grey leather interior as standard, together with grey carpets. These paint colours were later added to the list of available colours for ordinary models.

The Gentry was a limited edition 205, although arguably not a GTI model at all, as it used the track control arm front suspension of the regular 205 rather than the GTI's 'wishbone' design and a detuned 105 bhp (78 kW; 106 PS) 1.9 engine with auto gearbox. Only 300 models were made in Sorrento Green and Aztec Gold (sometimes called Mayfair Beige). They came with full-leather and wood effect interior, power assisted steering, ABS and heated mirrors. The Gentry came with the same body side trims as the GTI, which led to the Gentry often being mistaken for a GTI.

The Griffe was a special GTI edition for mainland Europe, and was sold in France, Germany and the Netherlands. It was bright green ('Laser' Green or 'Vert Fluorite'), and came equipped with all available vendor options at that time except air-conditioning, but including full black leather interior, ABS, power steering and sunroof. 1,652 Griffes were made, all in laser green and with dark grey anodised alloy wheels with a silver rim.

The 1FM was produced for the UK in 1992 to coincide with the 25th birthday of BBC Radio 1. Only 25 were made and each car was individually numbered with a small brass plate.The car was only available in black with 'Radio 1FM 25th' bodywork decals, grey speedline alloy wheels and came with all options fitted as standard. A special stereo system including a CD changer and an acoustic rear shelf was specified by Clarion. Radio 1 ran a competition on air to win one

From 1988 to 1992 Peugeot produced another variant of the 205, the 205 Rallye, which was engineered and produced by Peugeot-Talbot sport. This edition of the 205 was positioned as a cost effective alternative to the 205 GTI, retaining its sporty character, but being less expensive to buy or maintain.

To achieve this, Peugeot used a derivative of the TU-series engine used in the post-1987 205s, which was designated TU24. The engine is essentially the same engine as was in the 1.1-litre 205 with the cylinders bored out to a total engine displacement of 1294 cc, a sports camshaft and twin Weber carburetors. The 1.3-litre engine produced 103 PS (76 kW; 102 hp) at 6800 rpm. The car got the 1.6 GTI front suspension with ventilated brake discs, and the 1.6 GTI rear axle with drum brakes.

The 205 Rallye was completely stripped of almost all soundproofing, electrical systems or other luxury items, bringing down the weight to no more than 794 kg (1,750 lb). Its minimalistic equipment, together with the high revs needed to unleash all of the engine's horsepower gives the 205 Rallye a very spartan character and makes it a difficult but rewarding car to drive hard, which is one of the reasons it is now very popular among 205 GTI enthusiasts. Peugeot expected to build around 5000 Rallye's. In the end 30,111 Rallye's were produced, they were only sold in some countries on the European mainland (including France, Belgium, Portugal, Spain, Italy and The Netherlands).

The distinctive aesthetic features of the 205 Rallye include the squarer wheel arches (which are different from GTI arches), the steel body-coloured wheelrims and the rainbow-coloured Peugeot-Talbot sport decals on the front grille and the tailgate. They were only available in white and yellow. The Rallye was sold with a reduced-weight interior with the Peugeot-Talbot sport logo embroidered in the front seats.

After the 205 Rallye, Peugeot again used the 'Rallye' designation for some of its 106 and 306 models.

To homologate the 205 T16 ("Turbo 16" in France) Group B rally car, Peugeot had to produce 200 road-going examples. A photograph showing the 200 cars was famously rumoured to be a fake.Apart from the appearance, the road variants had practically nothing in common with the regular production model and shared the transverse mid-engine, four-wheel drive layout of the rally car, but had less than half the power; at around 200 PS (147 kW; 197 hp). The T was for Turbo; the 16 stands for 16 valves. The road going Turbo 16 205s were built by Heuliez. Outwardly similar to a normal 205, the T16 had wider wheel arches, and the whole rear section lifted up to give access to the engine. Underneath, the complex drivetrain from the rally car was kept to abide by the Group B rules. All 200 built were left-hand drive.

Peugeot Talbot Sport's factory 205 T16s under Jean Todt were the most successful cars to compete in the last two years of the World Rally Championship's Group B era, winning the 1985 and 1986 Constructors' and Drivers' titles with Timo Salonen and Juha Kankkunen respectively against such notable competition from Audi, Lancia and Ford, with an Evolution 2 model being introduced for the latter of those two seasons. 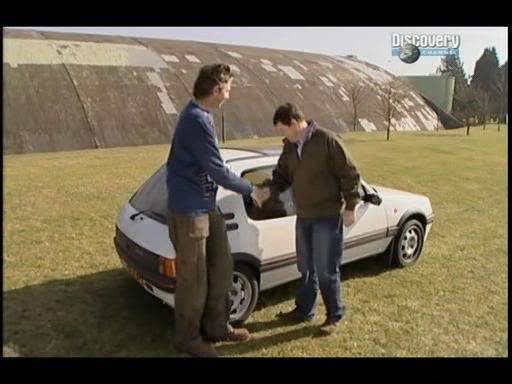