The 207 was launched in France, Spain and Italy during April 2006 and later on in other European, Israeli and Arabic markets.

The UK launch was on 8 June 2006. Amicus and the TGWU, both unions representing workers at PSA's UK manufacturing plant in Ryton, Coventry, chose the same day to launch a campaign calling for the boycott of PSA's Peugeot and Citroën vehicles in the UK. The campaign was in protest against the company's plans to close the Ryton plant. Despite the boycott the sales of Peugeot in UK grew.

The 207 is the successor to the 206. The 207 is based on a modified version of the platform used for the Citroën C3, and is built in Poissy (France), Madrid (Spain) and a new plant in Trnava, Slovakia.

The 207 is available as a three door

A GTI (or RC in some markets) version was also available, with the THP175 175 hp (130 kW) turbocharged 1.6 litre engine. A GT (or Limitee) version is also available, but is only sold with the THP150 150 hp (110 kW) turbocharged 1.6 litre engine, and also features a glass roof. Both the GTI and GT versions are sold exclusively with manual gearboxes. In Malaysia, the 207 is exclusively offered as a coupe and a four-door sedan variants instead of the hatchback version sold in Europe, and is also exported to other countries in the region such as Indonesia, Thailand, Brunei and Sri Lanka.

The car was facelifted in July 2009. It was given a new grille design similar to that of the facelifted 307 and LED lights on the rear. Some engine management software changes were also made, boosting the power of the GTI from 175 hp (130 kW) to 184 hp (137 kW). 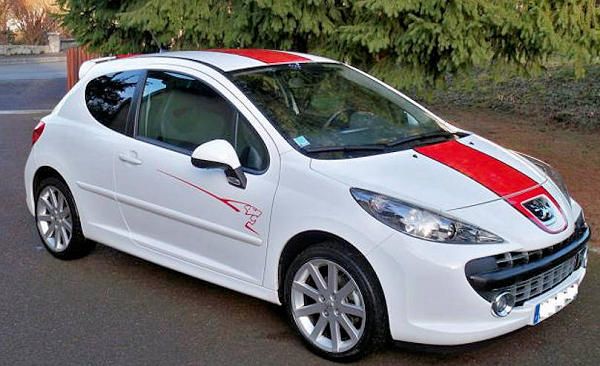 After just securing the top three positions in qualifying for the 24 hours of Le Mans endurance race, Peugeot had fittingly released details for a Peugeot 207 Le Mans Series special edition model. With only 2000 units produced, the 207 Le Mans Series was distinguished on the outside with a sport front bumper with Shadow aluminium grille and Black Chrome headlights. The body side moldings, bumpers strips and sideview mirror housings were painted body color, while a long racing stripe got trimmed along the bonnet, roof, and rear spoiler. Other decal accents included a Peugeot logo, striping on the doors and Le Mans logos on the liftgate. Also special multispoke 17-inch Pitlane aluminium wheels set the tone of the vehicle. Exterior colours were Banquise White and Obsidien Black.

Carried over from the 207 RC, the interior received grinium finish decor with front and rear bucket seats as well as RC front and rear mat covers. The steering wheel too, with a granium finish ring and numbered from 1 to 2000. The gearshift lever knob, pedal assembly, foot rest and door sill are in aluminium.

The Peugeot 207 met with somewhat mixed reviews, facing criticism for the design of its interior, for the quality of its gearbox, and for the vagueness of its handling, with the latter two extending even to the GTI version. In the words of Autocar magazine, "the Peugeot 207 hatchback is safely-played and as such lacks charm, verve and difference". It did receive wide praise for its value, safety and styling, however, and proved reliable despite initial fears from reviewers. Moreover, the CC version was better received, with Top Gear motoring magazine describing it as "a decent new version of one of the originals...of the tin-top cabrio breed".

Despite this lack of acclaim, it has sold well in Britain, being the sixth best selling car overall (and third in the supermini sector) in 2007 with more than 67,000 examples being sold.

At the 2006 Geneva Motor Show Peugeot also unveiled a sporty concept car based on the 207 and badged as the 207 RCup. This Super 2000 version is powered by a 2.0-litre petrol engine with maximum output of 280 hp (209 kW) and is intended as a successor for the 206 World Rally Car which was successfully used by Peugeot in the World Rally Championship, where it helped the team winning the manufacturers' championship in 2000, 2001 and 2002.

The Peugeot 207 Epure was a concept car presented at the Mondial de l'Automobile 2006 designed to preview the 207 coupé which followed. The 207 Epure was fitted with a sophisticated hydrogen fuel cell.